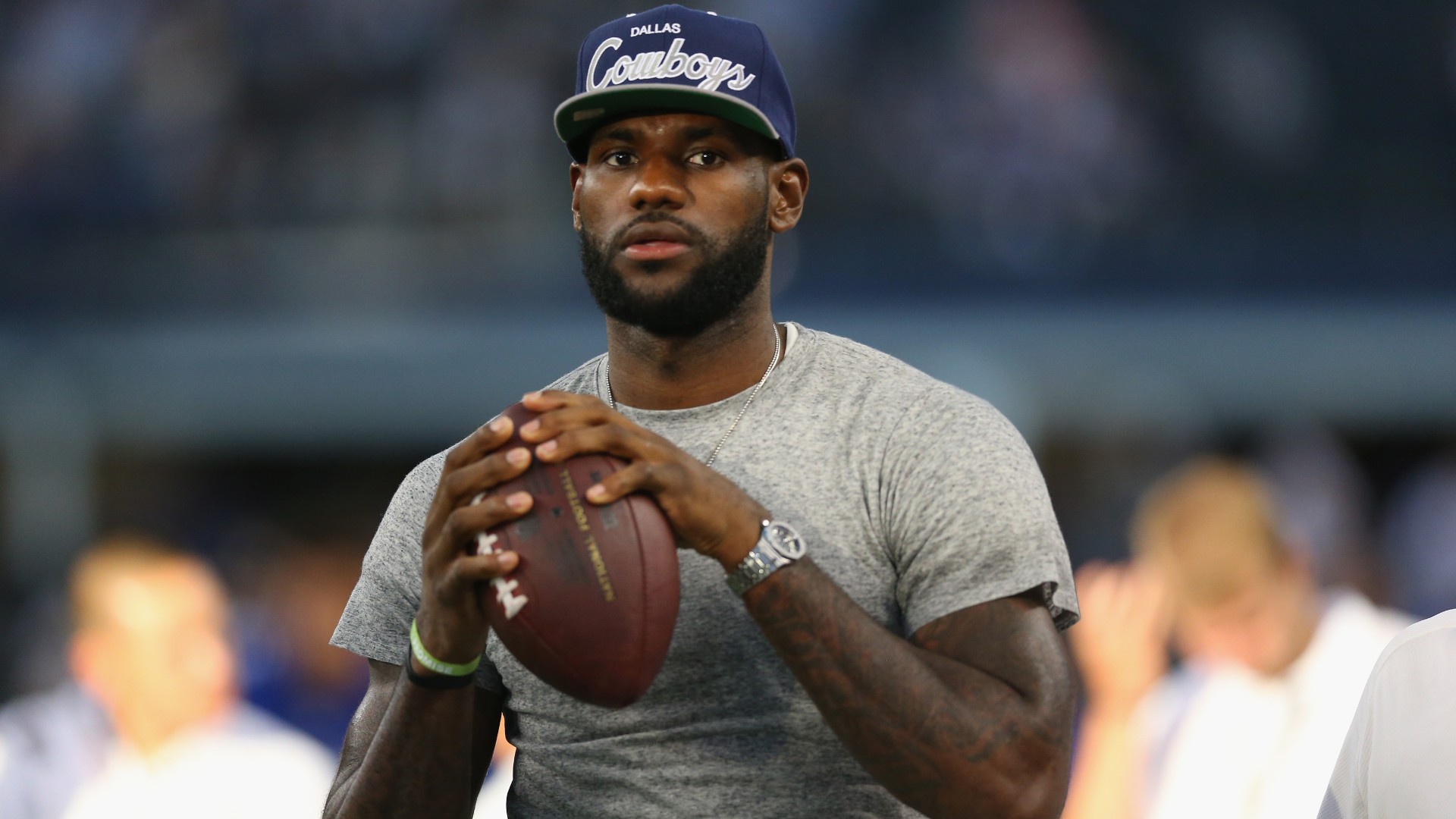 LeBron James was dubbed the next big thing for the NBA before he entered the league during the 2003 NBA Draft. The St. Vincent-St. Mary High School star was the No. 1 overall pick by the Cavaliers, and Cleveland hoped he would turn into the league’s next big star.

James has done just that. He is widely regarded as one of the best players in NBA history and is typically the player who many pit head-to-head with Michael Jordan when discussing the greatest basketball player of all time.

That said, James probably could have been an all-time great in a different sport if he didn’t stick with basketball. That would be football.

James played football for two seasons during his high school days and was considered the No. 1 football prospect in Ohio. At 6-8, 232 pounds, he was compared to “a taller, slower version of Randy Moss.” He received recruiting interest from several big-name schools, but he never budged on his desire to play basketball and go to the NBA.

James played his last competitive football game 20 years ago. While it’s clear that he made the right choice, many football fans still like to imagine what would have happened if he had chosen football instead.

James played just two years of high school football, but he averaged mind-numbingly good numbers during them. He averaged better than 20 yards per reception during his high school career thanks to his ability to both outjump people and make tacklers miss.

That jumping ability is part of what led James to rack up 23 receiving TDs during his two seasons. Had he played four full years, he would have been on pace for 46 career receiving touchdowns. That would have tied for the seventh-most in Ohio high school history.

You’ve seen a million highlights of LeBron on the court, but seeing him on the gridiron is a different type of experience.

The quality of these 20-year-old highlights may not be the best, but even through the grainy, pre-HD videos, James’ insane size and athletic ability stand out.

MORE: Why Kyler Murray turned down baseball for the NFL

James used his lanky, 6-8 frame and incredible athletic ability to make countless impressive catches during his high school days. He also showed toughness on the field. He once broke his finger and was told he didn’t have to play or could be used as a decoy if he went on the field. His response to the coaches?

So why did James stop playing football? There were several reasons that James elected to stop playing after his junior year. In an appearance on the “Manningcast,” he blamed his decision on poor quarterback play.

“If I would’ve had a better quarterback in high school, I might’ve continued to play football,” James said. “I took way too many hits.”

James also dealt with a broken wrist that sidelined him for his senior season in 2002. So, he essentially stopped playing football to protect his basketball career, as it was always his goal to go pro in the NBA. That’s part of why he didn’t play football during his freshman year.

“I went over to him and he was in the library and I said, ‘LeBron, hey, let me ask you, are you really interested in playing college football? I’ve got a ton of schools asking about you playing that have called me,'” Brophy said. “He said, ‘Well coach, I’m 99 percent sure I’m probably going to the NBA. But I wouldn’t rule it out.’

“He started laughing and he said, ‘No coach, I’m kidding. I’m gonna play basketball.’ I said, ‘All right, I just wanted to know.’ “

What position was LeBron James in football?

James played wide receiver during his high school days and also played prevent safety and served as the scout team quarterback. Some believed he could play just about anywhere if he had kept playing.

“With LeBron’s athleticism, I could see him as a tight end, H-back, receiver,” St. Vincent-St. Mary grad and former Indiana linebacker Chip Hilling told ESPN. “LeBron could wreak havoc as an outside linebacker, edge pass rusher. He’s a freak.”

That said, James almost certainly would have been a tight end had he continued playing. He has the requisite size (6-8) and elite athletic ability needed to be a big, strong mismatch weapon in the form of Antonio Gates.

Gates is a great example of an excellent tight end who played NFL football despite having never played college football. He played 16 NFL seasons and recorded 116 touchdowns — the NFL record for a tight end — in 236 games played.

Jimmy Graham is another good example of this. He was primarily a basketball player at Miami before the Saints spent a third-round draft pick on him. He played just one season of college football as a senior, but he showed enough to be a top-100 pick because of his 6-7 frame. Graham has logged 701 catches, 8,378 receiving yards and 82 touchdowns. He is still playing as a member of the Bears.

Hall of Famer Tony Gonzalez was a dual-sport athlete in college, too. Meanwhile, former Broncos tight end Julius Thomas and current Colts tight end Mo Alie-Cox spent most of their college careers playing basketball. Thomas played one season of football at Portland State while Alie-Cox never played until he joined the Colts.

Why do most basketball-turned-football players end up at tight end? It’s because the skill sets are similar. Tight ends need to be big, able to block and able to use their athletic ability to make contested catches over the middle of the field. Basketball players are often tall, know how to block out from rebounding and are among the best athletes in the world.

Thus, it’s no surprise that the basketball-to-tight end pipeline exists. Nor is there much doubt that James would have played — and likely excelled — at the position.

Did LeBron James have football offers?

James was heavily recruited by traditional college football powerhouses during his time in high school. That included Ohio State, Alabama and Miami.

However, as James’ high school football coach — former NFL linebacker Jay Brophy — explained, the coaches all eventually realized it was a waste of time to pursue James. He had already decided he was going to play basketball.

“Until the coaches got wise to how great he was and realized that he was definitely going to play basketball, they all wanted him,” Brophy told Bleacher Report in 2016. “It was all the major schools.”

James actually did receive a couple of offers to play in the NFL. They came during the 2011 NBA lockout, as a couple of opportunistic NFL minds — Jerry Jones and Pete Carroll — attempted to court James while he was off the court.

James explained how the offers went down during an appearance on “Monday Night Football with Peyton and Eli” in Week 4.

“Jerry Jones offered me a contract also Pete Carroll did as well in Seattle during our lockout time,” James told the Manning brothers. “It definitely got my blood flowing again, it got my mind raising again thinking about the game of football and being out there on Sundays. But we were able to get a deal done in the NBA and I was back on the court in no time but I definitely thought about it.”

James has expressed confidence over the years that he would have been signed if he had attended tryouts with the Seahawks, Cowboys or Browns. He was 26 at the time the offers were on the table.

“I just know what I’m capable of doing on the football field. Especially at that age.”

Alas, the lockout ending snapped James back to reality and created one of the best “what if” hypotheicals in sports. Still though, he has kept a couple of souvenirs from that time in his life.

“I still have the jerseys too that Jerry and Pete sent me from 2011,” James said.