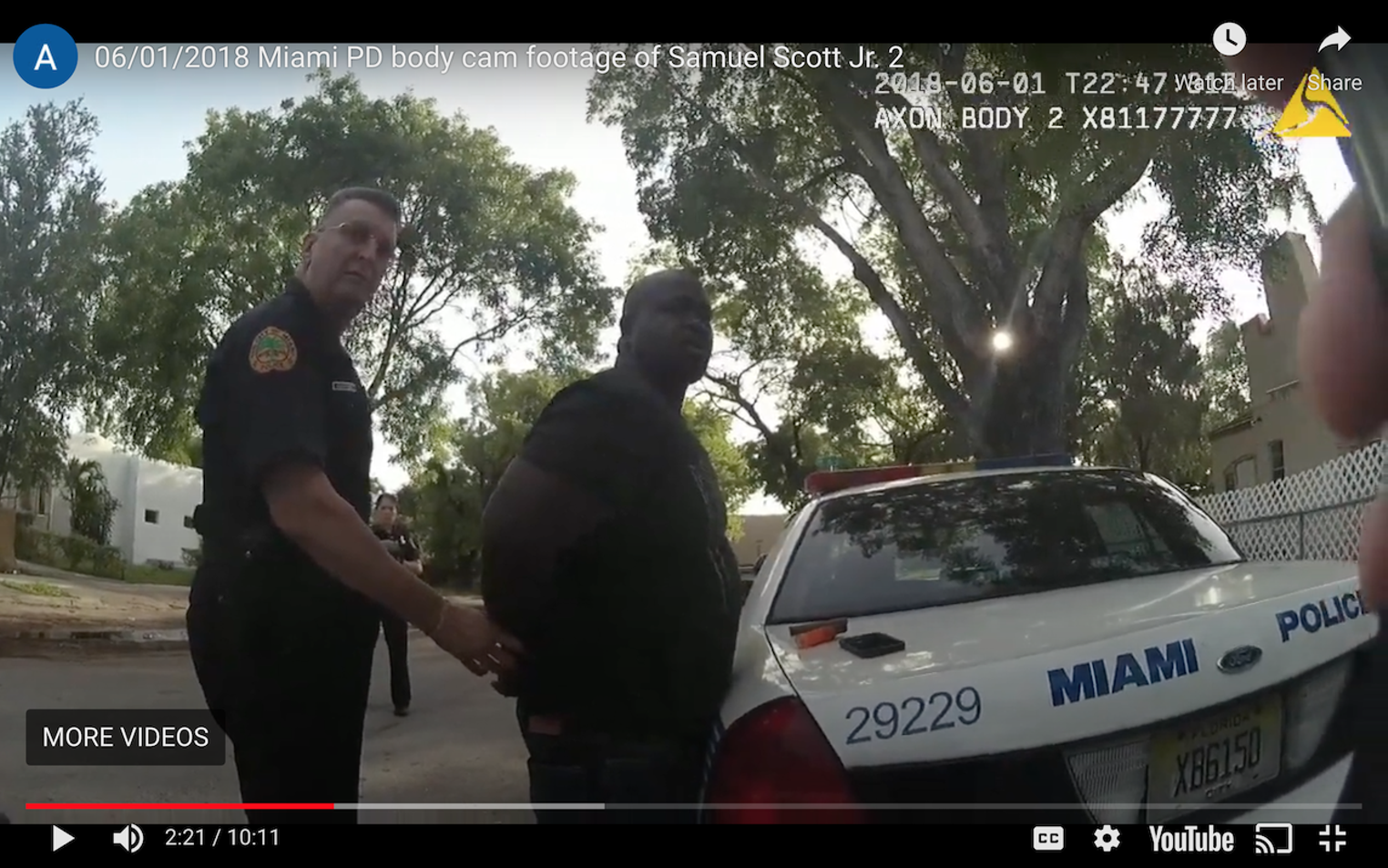 It’s hard to imagine how the 44-year-old’s day could get any worse. But roughly half an hour after making a 911 call, Scott was taken away in handcuffs by the Miami Police Department (MPD) officers he had called to report the theft and help get his car back.

Why? Officers believed Scott was the perpetrator of the crime, not the victim.

“I’m telling you, you guys have the wrong guy,” Scott — a Black man wearing a dark-colored shirt over a white undershirt at the time — can be seen telling an officer in body-worn camera footage obtained by New Times.

“The description of the guy who took off in your car is just like yours,” the officer responds.

“But that’s half of Miami,” Scott says.

A few minutes later, Scott laughs to himself: “I mean, why would I call the police?”

Scott was charged with leaving the scene of an accident, false reporting of a crime, failure to carry a concealed-weapon license, and possession of marijuana — charges that were eventually dropped by the Miami-Dade State Attorney’s Office. In his mugshot, Scott flashed a toothy grin.

Three years later, Scott is suing the City of Miami and the five officers — Jonathan Guzman, Michael Bloom, Brandon Williams, Miguel Hernandez, and Randy Carriel — alleging that they unlawfully searched, falsely imprisoned, and maliciously prosecuted him on that day in June of 2018.

“He reported to the cops because he believed that the cops were actually going to assist him,” Pierre says. “And then it turns out that they racially profiled him.”

“He believed that the cops were actually going to assist him and then it turns out that they racially profiled him.”

It started around 5:40 p.m. when Scott left his aunt’s house after a quick visit and noticed his car had seemingly vanished.

According to Scott’s arrest report, MPD officer Jonathan Guzman spotted the Jeep Compass driving 20 miles per hour over the speed limit a few miles away. Guzman attempted to stop the vehicle when it collided with another vehicle. The driver, who fled on foot, was described as a “Black male, bald, about 6’2″ and heavy set, with a white tank top.”

When officers arrived at Scott’s aunt’s house two miles away, they began interrogating him “as if he had stolen his own vehicle,” according to the lawsuit. As Scott filled out a stolen-vehicle affidavit, an officer warned him that he would be arrested if he made a false report.

According to the complaint, one officer asked Scott if his car was repossessed. Another later pulled out a Taser, seemingly ready to use it.

Though Scott was wearing a black shirt over a white undershirt — not a white tank — and is four inches shorter than the suspect’s description, the arrest report states that “the person reporting the stolen vehicle matched the description of the offender that fled the scene of the hit and run. Upon arrival the complainant was wearing the same clothing description.”

“Yeah, that’s him,” an officer says on the body-worn camera footage. “He’s sweating, he has a black shirt on top of the tank top shirt.”

Scott tried to tell officers they were arresting the wrong man and that he’d never been jailed before, the lawsuit states, but they “did not believe Scott, a black man, was never arrested.”

According to the arrest report, officers found four plastic baggies in Scott’s car that had “green spots with suspected marijuana.”

Pierre notes that Scott has a concealed-weapon permit and carried a gun in his vehicle at the time of the incident. He still can’t figure out where the marijuana charge came from.

“That was just adding to the fantasy we call this arrest,” Pierre says.

Pierre emphasizes that race played a major role in Scott’s arrest, since the officers couldn’t distinguish obvious contradictions between Scott and the suspect who fled — only that both men were Black.

Scott’s lawsuit, which was filed in federal court on November 13, comes roughly six years after the high-profile case of stranded motorist Corey Jones, a Black musician who was fatally shot by Palm Beach Gardens police officer Nouman Raja while waiting for a tow truck after his SUV broke down on the I-95 exit ramp at PGA Boulevard. (Raja was sentenced to 25 years in prison for manslaughter and attempted murder, making him the first Florida police officer in nearly 30 years to be convicted and sentenced for an on-duty killing. Last week, the Florida Supreme Court rejected his appeal.)

To Pierre’s knowledge, no one else has been arrested for stealing Scott’s car. The City of Miami didn’t respond to emailed questions from New Times asking whether anyone else was charged in connection with the incident.

Guzman, who shut off his body-worn camera at least three times during the incident, was one of three officers wearing cameras at the time of Scott’s arrest. All five officers involved are still on the force, according to an MPD roster obtained by New Times.

While Pierre says it would be nice for Scott to receive an apology from the officers, he knows that likely won’t happen. They’re simply seeking compensation.

“Yes, we want justice, but in the form of him being compensated,” Pierre says. “That’s the only way our legal system actually provides any remedies.”