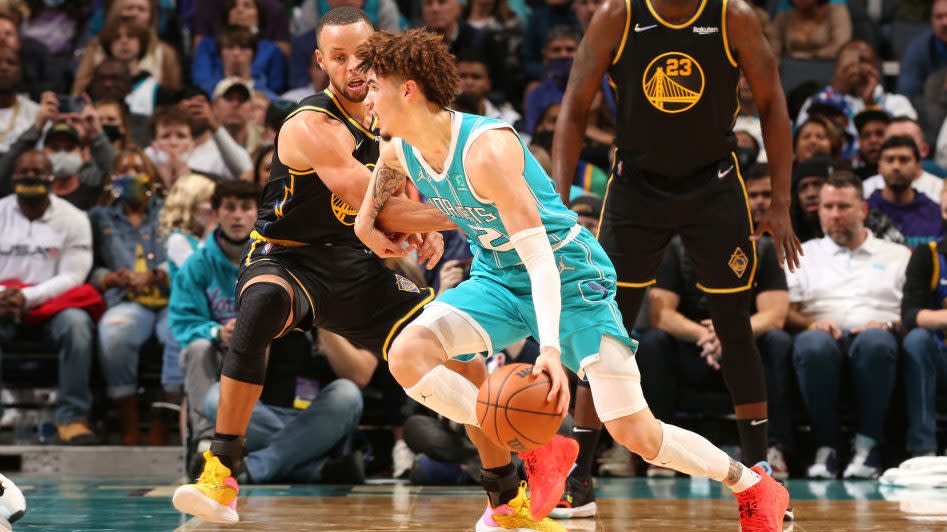 Three Things is NBC’s five-days-a-week wrap-up of the night before in the NBA. Check out NBCSports.com every weekday morning to catch up on what you missed the night before plus the rumors, drama, and dunks going that make the NBA great.

Home cooking and a soft schedule had served the Warriors well with their fast start to the season — eight straight games at the Chase Center, which led to a seven-game win streak and the best record in the NBA.

But the Warriors forgot to pack their offense when they went out on the road Sunday.

Golden State shot 9-of-39 (23.1%) from 3 — the Warriors’ bench was 0-of-9 from deep — and scored less than a point per possession against a Charlotte team with a bottom-five defense. It wasn’t that the Hornets were locking the Warriors down; Golden State was just missing clean looks. Also, in crunch time, the Warriors struggled to generate good looks out of their halfcourt offense and shot 6-of-22 in the fourth (those struggles when it started to feel like a playoff game are not the best omen for Warriors fans).

Despite all that, the Warriors still could have walked away with a win, a Draymond Green dunk with :44 left tied the game. But then Miles Bridges got up a little a hook shot to put the Hornets up two, Kevon Looney missed a pair of free throws, and after Green tied up Rozier late and forced a jump ball, it was Rozier who won it, and not long after iced the game with two free throws.

The Hornets got 20 points in the second half from Rozier, Bridges scored 22 including that key bucket in the paint late, and LaMelo Ball did his damage early and finished with 21 points. This is a quality win for a Hornets team that now has its own three-game winning streak and seems to have found a rhythm.

The highlight of the game still belonged to Stephen Curry, who got some help from Jonathan Kuminga’s defense then made the pass of the night to Jordan Poole.

The Warriors are on the road for three more games, and it doesn’t get any easier with Kevin Durant and the Nets coming up on Tuesday.

DeMar DeRozan was born in Compton, played his college ball just down Figueroa Street from the Staples Center at USC, and seems to save his best performances for when he returns home to Los Angeles.

DeRozan had 21 points on 8-of-10 shooting in the first half and finished the night with 35 points on 12-of-16 from the floor, plus he drained a couple of key buckets late. That sparked the Bulls to a 100-90 win over a Clippers team that had won seven straight but looked tired on the second night of a back-to-back.

“Our guys got tired,” Clippers coach Tyronn Lue said, taking the blame for a team that didn’t have its legs under it after beating the Timberwolves the night before. “I messed up and played them too many minutes. That was on me.”

The other big scorer for the Bulls was Zach LaVine, who dropped 29. However, the most interesting move by coach Billy Donovan was to insert Alex Caruso into the starting five, replacing Javonte Green. Caruso is a quality on-ball defender and drew the task of slowing Paul George, who still had 27 points but shot 7-of-25 for the night. We may see more of Caruso as a starter, even once Nikola Vucevic returns to the lineup (health and safety protocols).

The Bulls got off to a fast 4-0 start against a soft schedule this season, but as things got tougher they have gone a respectable 5-4. The defense that was supposed to be the Achilles heel of this team has been top-10 in the league, and as long as that continues, the Bulls will continue to rack up wins.

3) Atlanta snaps losing streak but picks up another loss

Atlanta was riding a six-game losing streak and was about to take on the defending NBA champions, but Trae Young took it upon himself to change the Hawks’ fortunes and scored a season-high 42 — hitting 8-of-13 from 3 — to get Atlanta a win against the team that knocked them out of the playoffs last season.

That win came despite the return of Giannis Antetokounmpo to the lineup, he scored 26 points (he had missed a game with a sprained right ankle). The Bucks are still shorthanded and have dropped 7-of-10 because of it, but they expect to get Khris Middleton back Wednesday. He had been in the league’s health and safety protocols.

While the Hawks got a big win on the court Sunday, they had a big loss off it.

Atlanta’s starting wing De’Andre Hunter is going to miss the next two months following wrist surgery, the team announced. Hunter has struggled with injuries, a knee issue last season kept him out of all but 23 games, and now he’s having surgery a dozen games into this one.

Kevin Huerter has moved into Hunter’s starting role, but there will be more run for Cam Reddish, Delon Wright, Danilo Gallinari, and Lou Williams.

Highlight of the Night: Anthony Davis to himself off the backboard

Anthony Davis showed up ready to play for a Sunday matinee, scoring 34 points and grabbing 15 boards for the Lakers in a win over the Spurs. He even threw himself an alley-oop off the glass.

(Yes, technically that hit the rim, so it should be a missed shot and offensive rebound in the scorebook, but we know what he was trying to do.)