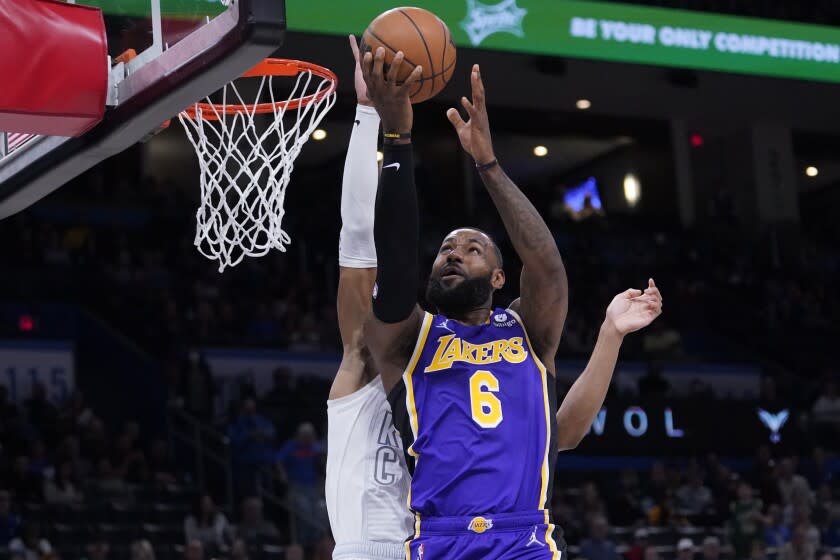 Anthony Davis woke up Friday morning in Oklahoma City with significant soreness in his left knee, unsure of when the injury could’ve happened the night before. For just the second time this season (and the first because of an injury), he wouldn’t be able to join his teammates on the court.

With Davis ruled out just before tipoff, the Lakers had to scramble to find a way to get a win that they really needed.

The Lakers got that win and made it look relatively easy, beating the Thunder 116-95.

It was the kind of performance that has eluded the Lakers for most of the season — a domination on both ends thanks to energy and execution. Hot shooting from one of the best players in basketball history didn’t hurt either.

Unlike the night before in Memphis, James had lots of help, starting with Avery Bradley, who is in the lineup for his on-ball defense. He quickly scored eight points, including back-to-back three-pointers, to get the Lakers going early.

Bradley would score 22 — a season high, making six of the Lakers’ 19 threes. Austin Reaves came off the bench to score 13, and Talen Horton-Tucker had 11. Russell Westbrook, returning to cheers in Oklahoma City, had eight points, nine rebounds and seven assists.

Oklahoma City, which came back from double-digit deficits twice against the Lakers already this season, briefly threatened another comeback in the fourth quarter, but a ferocious one-handed slam by James smothered any of those hopes.

Without Davis, the Lakers started Dwight Howard and used DeAndre Jordan off the bench at center. In the first half, Jordan grabbed his 10,000th career rebound, one of 45 players to reach the milestone.