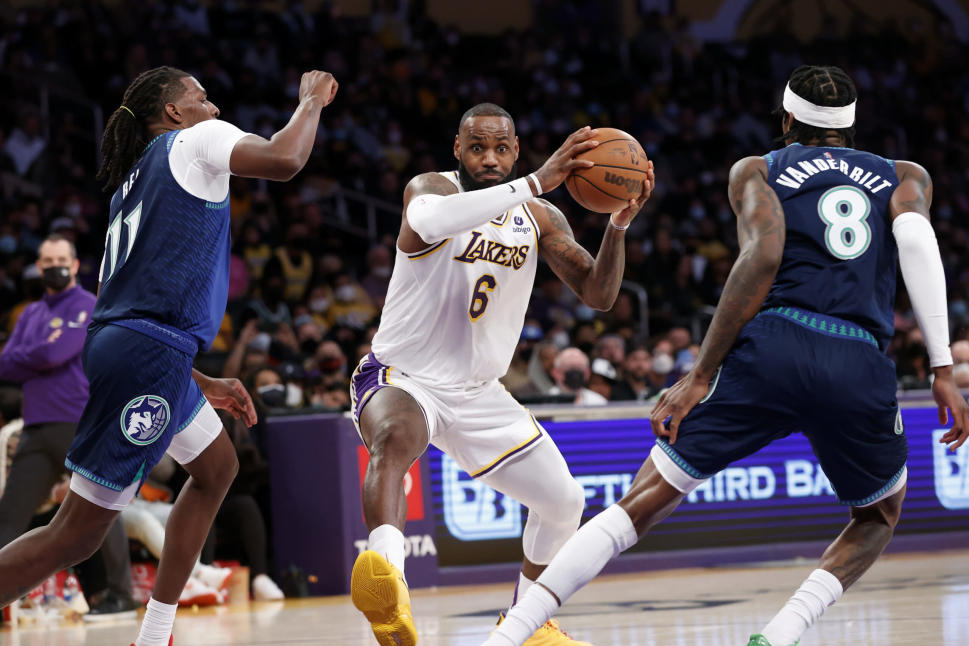 The Los Angeles Lakers escaped Sunday’s game against the Minnesota Timberwolves with a win, 108-103.

It’s Los Angeles’ first win against Minnesota this season after the last two resulted in blowout losses. Karl-Anthony Towns and D’Angelo Russell did not play in this one due to health and safety protocols.

The Lakers held the lead at halftime after Malik Monk and LeBron James led the way, but L.A. couldn’t rebound the ball whatsoever. That bit the team in the third quarter when the Timberwolves started the period on a solid run, but the Lakers made lineup adjustments and got back into it.

LeBron made some clutch defensive plays in the fourth quarter while Carmelo Anthony nailed tough jumpers to help put the Timberwolves away.

Here is how the Lakers, now 19-19 on the season, graded individually:

Despite the win, Russell Westbrook still gets an F. The Lakers were lucky to avoid losing after his performance, even though he scored 20 points. Westbrook added five assists, three rebounds, a steal and a block to his name, but he also missed all five 3-point attempts and turned it over nine times.

He forced shots, tried to take Naz Reid — a great lateral-moving perimeter defender at the 5 — one-on-one, missed shots near the rim against taller defenders and lost the ball at inopportune times. He also had a five-second violation late in the game that nearly turned costly, but Anthony Edwards’ shot went in and out.

Malik Monk continues to be a reliable presence in the starting lineup, which is what he aspires to be for the team. Tonight, he scored 22 points on 8-of-14 shooting and made 4-of-9 attempts from deep to go with two blocks, one assist and one steal. His two-man game with LeBron had good moments, and when the Lakers needed someone other than James to make a shot, Monk stepped up to fulfill that need.

Avery Bradley is the unsung hero for this win. He made 5-of-7 shots (2-of-4 3P) for 14 points, including a tough stepback jumper to beat the buzzer late in the fourth quarter. He added four steals (one came late in the fourth that prevented an open transition layup), four rebounds and an assist. He also played a role in Edwards shooting 0-of-6 from deep.

Stanley Johnson didn’t impact the offense as much as he has done in recent games, but he still had some good plays defensively. The matchup against Naz Reid didn’t go his way, but he logged three steals and forced a jump ball on that end. He gets a passing grade, though he has played better.

LeBron’s 30-point streak ended tonight, but he still completed the game with 26 points on 7-of-15 shooting (3-of-9 3P), seven rebounds, five assists, three steals and a block. His shotmaking disappeared in the fourth quarter, but he made up for it by making plays on the ball on defense that gave L.A. extra possessions. He also shot 9-of-12 from the free-throw line, so it was good to see him make routine trips there for a rare time this season.

The lineups with Carmelo at center didn’t work at all tonight, but he made timely shots when called upon, including a four-point play late in the game. Anthony scored 14 points on 5-of-10 shooting overall and 3-of-7 from deep to go with two assists, one steal and one block. One of those assists went to a cutting Bradley as Anthony went up for the long two, but he found Bradley for a clutch layup.

Talen Horton-Tucker didn’t capitalize after having a positive outing last time. Tonight, he shot 2-of-7 from the field for six points, five rebounds, two assists and a steal. He missed both of his triples, but one went in and out. He has missed his last 16 3-point attempts, so hopefully he finds a rhythm as soon as possible.

Austin Reaves stuck to his role and finished the game with two points on 1-of-1 shooting, four rebounds and two assists in 22 minutes. He’s still acclimating after missing time due to health and safety protocol, but he’s finding his form again. He gets credit for an extra pass to Anthony who drilled a 3-pointer after desperately calling for the ball all possession.