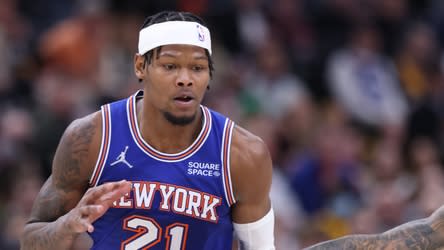 The Knicks finally held on to a double-digit lead and snapped a seven-game losing streak after taking down the Los Angeles Clippers, 116-93.

– Alec Burks knocked a corner three for the game’s first bucket, and hit his three of his first five. Julius Randle missed all seven of his shots in the first but grabbed five rebounds. The two teams combined to shoot just 29.4 percent from the floor (10-for-34) in the first eight minutes of the quarter, with Randle, RJ Barrett, and Evan Fournier shooting a combined 2-for-14 to start. The Knicks also missed their first five free throws. Immanuel Quickley, however, put up a quick seven points off the bench, and Mitchell Robinson had four points, three boards, a block and a steal after the first, where the Knicks led 25-22.

– The Knicks opened up the quarter with a 16-0 run, as the Clippers started the second quarter 0-for-13 from the floor. The Knicks didn’t get a lot of volume from behind the arc in the second, shooting just 2-of-6, but L.A. missed 10 of their 14 three-pointers that quarter. The Knicks led 59-40 at half, but they did miss nine free throws in the first 24. Barrett also turned it on in the second, scoring 16 of his 18 points in the second – he also had eight rebounds, while the Knicks had just one turnover in the first half.

– The Knicks increased the lead to 26 and were hot from the floor, knocking 8 of their first 14 to start the third. But they went cold, missing their next four, and the Clippers went on an 18-4 run following to cut the deficit to 12. The Knicks led 80-68 through three.

– But this was a double-digit lead the Knicks finally would not squander. In fact, they put their foot on the pedal and floored it – Cam Reddish scored the Knicks’ first six points of the fourth and 11 of their first 15, and the Knicks got their lead up to 32 points by opening the quarter on a 30-10 run. Reddish scored 15 of his 17 points in the fourth, which could earn him plenty more minutes down the line. His 25 minutes on Sunday were his most as a Knick.

– Eight of Robinson’s 11 rebounds came on the offensive glass, while Jericho Sims was also impressive on the boards – he grabbed a career-high 11 rebounds, five of them offensive.

– Quickley continued his hot shooting, going8-for-14 from the floor and 3-for-5 from long range. In his last six games, he is shooting 46.9 percent from deep (15-for-32). He also grabbed 10 rebounds, a career-high, and dished out six assists.

The Knicks will head to northern California to face the Sacramento Kings tomorrow at 10:30 p.m.