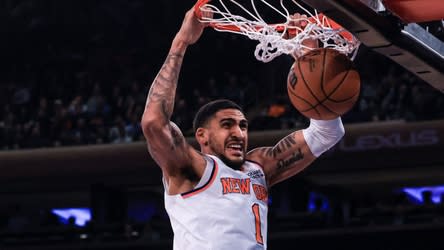 The Knicks fell to Orlando 104-98 on Wednesday night at The Garden, falling to 1-2 against the Magic this season.

Here are the key takeaways …

– Julius Randle got things started for the Knicks with a three-pointer on a second-chance opportunity. The Knicks hit three of their first six from beyond the arc, and Kemba Walker scored five early points to put the Knicks up by five in the early going.

Tom Thibodeau kept the starting five on the floor for the first seven minutes before calling Derrick Rose and Taj Gibson off the bench. The Knicks from deep went cold as they finished 3-of-10 from beyond the arc, but some late Obi Toppin dunks gave the home team a 23-21 lead after one.

– The cold shooting leaked in the second quarter, as the Knicks’ three-point shooting percentage fell to 25 percent (4-of-16), but an off-balanced Evan Fournier jumper helped the Knicks get into a bit of a groove, as they pushed their lead to six points.

Orlando stuck right with the Knicks, though, and a Cole Anthony three at the buzzer put Orlando up 50-49. Mo Bamba finished the half with 10 points and Terrence Ross got red-hot off the bench for 15 first-half points. For the Knicks, Randle led the way with 10 points, but the Knicks were just 27.3 percent from three.

– Third-quarter woes have plagued the Knicks of late, and that was once again the case on Wednesday night, as it seemed like they couldn’t buy a shot in the third. They went more than four minutes with a point in the middle of the quarter, and for most the quarter they had as many turnovers as shots made. A trip of late threes kept the Knicks in the game, however.

Orlando outscored the Knicks 22-18 in the third, as the Knicks were just 10-of-36 from three through three, trailing 72-67 heading into the fourth.

– The Knicks finally started knocking down threes more consistently to start the fourth. Alec Burks hit a pair before Toppin connected to cut the Orlando lead back three points with just under nine minutes to go. With the crowd into the game, Burks and Toppin each connected again for New York, capping a 10-0 run to put the Knicks up by five.

The Knicks maintained a three-point lead into the final three-and-a-half minutes, but a costly turnover by Immanuel Quickley led to a Ross slam to put Orlando back up by a point shortly thereafter. The teams traded buckets, but an Anthony floater put the Magic up by four with just over a minute left, and they held on for their second win over the Knicks this season.

– RJ Barrett led the Knicks with 17 points, while Burks finished with 15. Toppin tied a career high with 14 points. Ross led the Magic with 19 points, as they had six players in double-digits.

The Knicks have a couple days off before getting back on The Garden floor on Saturday against the Houston Rockets at 5:00 p.m.