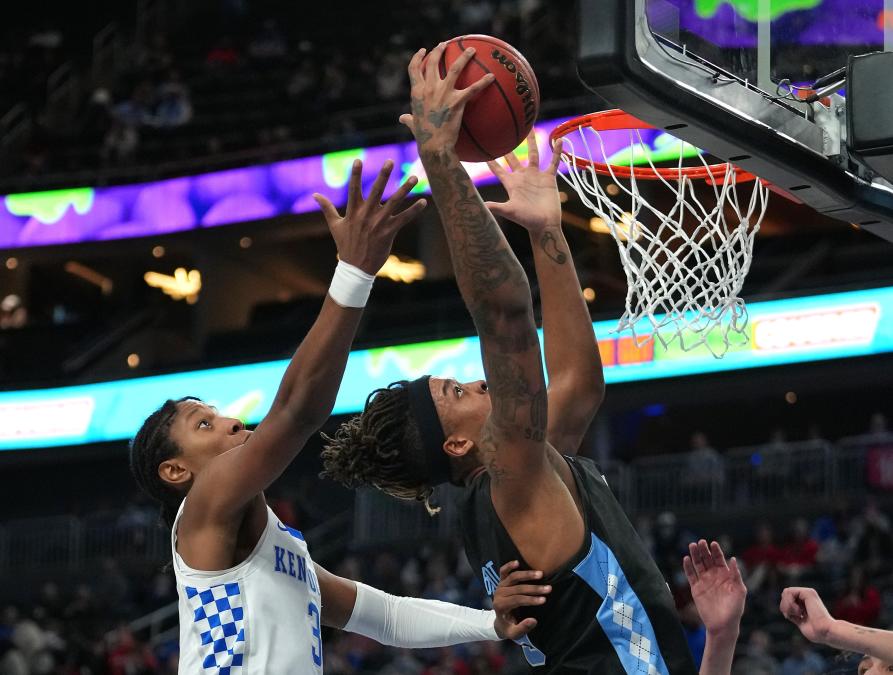 LAS VEGAS — Whatever headway North Carolina made across recent weeks in building a five-game winning streak, that progress was nowhere to be found here in the desert.

Previously, North Carolina’s most jarring loss on the season occurred against Tennessee, an 89-72 defeat last month that served to spark the winning streak that followed. What unraveled Saturday became far greater of an indictment of the Tar Heels, with Kentucky building an 18-point lead in the first half that ballooned to a 35-point margin during the second half.

Energy and effort, will and want to, those core qualities are part of Davis’s coaching mantra. And North Carolina turned up bankrupt in those areas on this afternoon in Las Vegas.

Sahvir Wheeler, Kentucky’s 5-foot-9 engine, emerged as the driving force. He delivered 26 points, eight assists and four steals, shredding the Tar Heels on drives into the paint and to the basket. Wheeler finished 12-for-15 from the field — 10 of his buckets were scored as layups — and fully answered coach John Calipari’s pregame call of “Sahvir, lead us.”

Kentucky’s Kellan Grady, the Davidson transfer, scored 18 points on the strength of five 3-pointers. Oscar Tshiebwe supplied 16 points and 12 rebounds, as the Wildcats (8-2) mauled North Carolina on the boards and hauled in a 44-26 rebounding advantage, the worst the Tar Heels have been outrebounded in 12 years.

“Right away, they stunned us,” North Carolina power forward Armando Bacot said. “They hit us with a knockout punch early in the game, and we just never recovered.”

Bacot’s 22 points and 10 rebounds topped the Tar Heels (8-3), who also got 10 points from RJ Davis. North Carolina missed all but one of its 13 attempts from 3-point range — shooting a miniscule 7.7 percent beyond the arc — and checked in at 43.4 percent from the field for the game.

The Tar Heels, among their deficiencies, were hindered by a relative no-show from leading scorer Caleb Love, who had more turnovers (four) than made field goals (two) and struggled to produce.

North Carolina and Kentucky, two of college basketball’s storied programs, weren’t scheduled to play each other in this event, traditionally a doubleheader. But positive COVID tests knocked out No. 15 Ohio State, Kentucky’s opponent, on Thursday. And a day later, No. 4 UCLA’s COVID situation, with coach Mick Cronin landing in health and safety protocols, left the Tar Heels without an opponent.

So the Tar Heels and Wildcats linked up and squared off in Saturday’s one-game version of the CBS Sports Classic, and Kentucky’s 29-point beatdown became its largest margin of victory against a North Carolina team since January 1950. By the end, Kentucky supporters, who outnumbered Tar Heels fans by at least two to one in this building, were ringing in the victory with “Go big blue!” chants.

“It just came down to toughness and executing,” RJ Davis said, “and we just didn’t do that. It shows that we can’t take any nights off. We have to be a high-energy, aggressive team every time we step on the floor. This one is definitely embarrassing.”

Kentucky’s chairmen of the boards

Kentucky entered as the national leader in offensive rebounding percentage, and the Wildcats fit that billing. Kentucky grabbed 17 offensive boards and converted 15 second-chance points, the most North Carolina has allowed this season.

During one particularly alarming sequence in the first half, Kentucky got four shots on the same possession by continuing to retrieve its misses, before TyTy Washington Jr. sank a jumper for a 31-15 lead. At that juncture, the Wildcats had collected 11 offensive rebounds, while North Carolina had none.

Beyond Bacot, the Tar Heels were overmatched underneath. Tshiebwe, the 6-foot-9, 255-pound space eater, led Kentucky’s glass-crashing effort, with help from the bouncy trio of Keion Brooks Jr., Jacob Toppin and Lance Ware.

No answer for Sahvir Wheeler

Wheeler didn’t make a shot from the field and had just three points and two assists in Kentucky’s 66-62 loss at Notre Dame last weekend. He responded in relentless and resounding fashion here against North Carolina – penetrating and creating, controlling the tempo to the Wildcats’ liking, terrorizing Love and RJ Davis at times as a defensive pest, on the way to finishing one point shy of a career high in scoring.

“We did not have an answer for Wheeler,” Hubert Davis said. “He was faster than any one of our players, and he was able to get anywhere he wanted to. We knew that he’s a dynamic guard that can get into the middle, and that he can make plays. He’s terrific at distributing the basketball, he’s terrific at penetrating, and plain and simple, period the end, he was better than any one of our guards.”

Wheeler said he got a call Saturday morning from his father, who mentioned the success Tennessee found driving on the Tar Heels and collapsing their defense.

“As he was coming to the game,” Wheeler said, “in the airport he called me and he was like, ‘Yo, let’s watch this Tennessee game and see how they were able to get into the paint. And we dissected that.”

North Carolina put together an encouraging stretch during the last 3½ minutes of the first half, trimming its 18-point deficit to 40-29 by halftime and showing signs of life.

Bacot, who provided 17 of the Tar Heels’ first-half points, closed strong. He scored on an offensive rebound and put-back, attacked Ware with a spin move that bullied the Kentucky forward, and fed Leaky Black on a backdoor that cut the Wildcats’ lead to 11.

Kentucky then hit six of its first eight shots to open the second half. Wheeler scored on a scooping drive past Bacot and Tshiebwe muscled inside for a bucket, moving the Wildcats ahead 53-35, as Kentucky proceeded to leave no doubt.

Adam Smith is a sports reporter for the Burlington Times-News and USA TODAY Network. You can reach him by email at asmith@thetimesnews.com or @adam_smithTN on Twitter.

Take advantage of our $1 for 6 months sale on digital subscriptions. For special offers, click here.