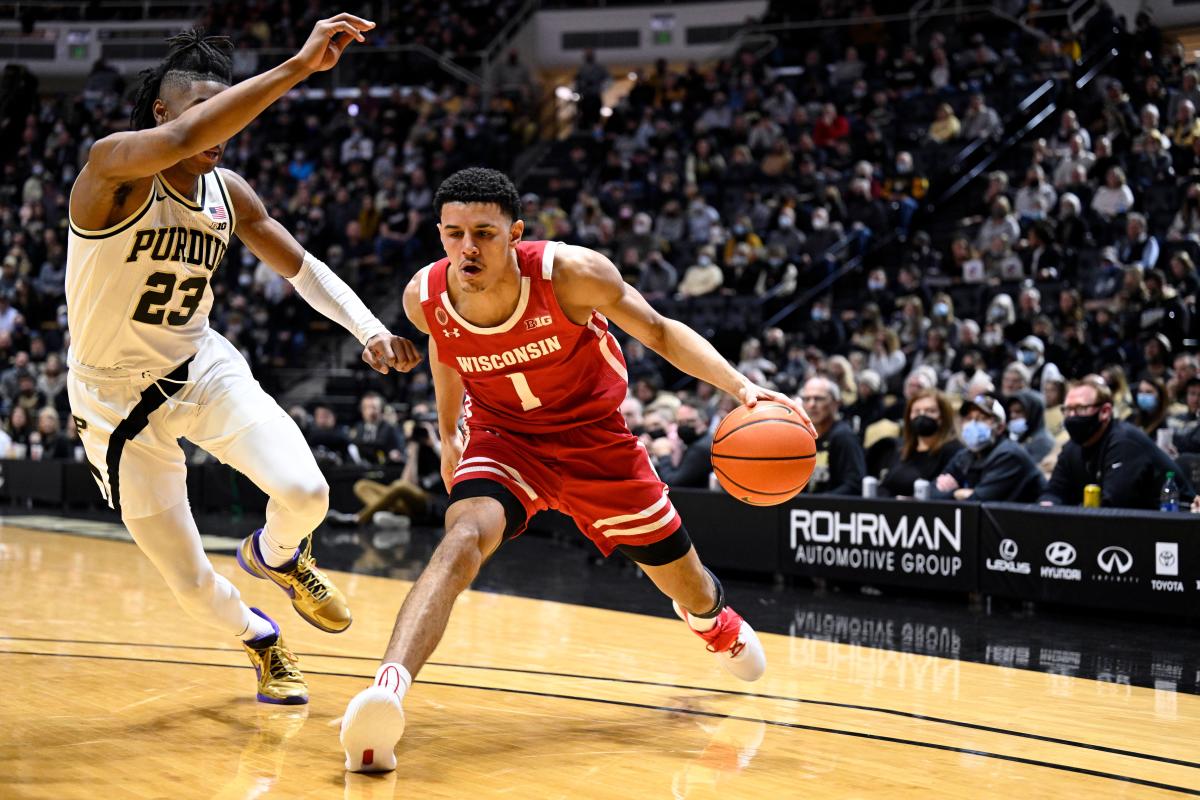 WEST LAFAYETTE, Ind. — With his full complement of players available for the first time since Dec. 4, Wisconsin coach Greg Gard saw his team outplay No. 3 Purdue for 40 minutes of intense, physical and sometimes testy basketball.

The Badgers excelled at everything but three-point shooting in building a five-point halftime lead. They got the ball inside and converted, played tenacious defense and protected the ball.

Matt Painter’s deep and talented Boilermakers counterpunched in the opening minute of the second half and led by as many as seven points.

But like an upstart heavyweight contender, the Badgers and battled to the end.

The outcome was decided in the final three-plus minutes when UW used an 8-1 run to build a seven-point lead with a minute left.

With Johnny Davis and Brad Davison combining for 52 points and almost as many big plays, UW held on for a stunning 74-69 victory at Mackey Arena.

Davison added 15 points, three rebounds and three assists. He hit 3 of 6 three-pointers and 5 of 11 shots overall and fed Davis for a clinching dunk in the final seconds.

EVERYTHING YOU NEED TO KNOW: Stay up to date with our sports newsletter

UW had to call a timeout when Carter Gilmore couldn’t get the ball inbounds. UW eventually got the ball in and Davison was fouled with 12.3 seconds left.

Davison, who hadn’t attempted a free throw to that point, hit both for a 72-67 lead.

The Boilermakers threw a lob to Edey, who cored with 11.4 seconds.

UW got the ball in despite heavy pressure and Davison fed Davis in open court.

UW had every player available Monday for the first time in Big Ten play and for the first time since defeating Marquette on Dec. 4. That included guards Jahcobi Neath and Lorne Bowman and forward Ben Carlson – all in Gard’s regular rotation – who were among five players who did not dress Wednesday in UW’s 89-85 victory over Illinois State.

The Badgers at times resembled the team that beat Texas A&M, Houston and Saint Mary’s en route to winning the Maui Invitational in November.

They took care of the ball, played tenacious defense and hit timey shots.

Steven Crowl and Chris Vogt, battled hard down low against Purdue’s big men and combined for 10 points and six rebounds.

Tyler Wahl contributed 6 points and four rebounds before fouling out with 2:11 left and UW leading, 65-62.

The Badgers missed 7 of their first 8 field-goal attempts but settled in, scored in the lane and took advantage of Purdue mistakes to build a 29-24 halftime lead.

UW did everything well but shoot three-pointers.

The Badgers made just 1 of 12 three-pointers – courtesy of Chucky Hepburn – but outscored the Boilermakers by 18-4 in the paint, hit 12 of 18 two-point shots and played tenacious defense.

Gillis hit his third three-pointer of the half to cut UW’s lead to 27-24 and Crowl then missed a three-pointer.

Purdue called a timeout with 30.6 seconds left to set up a play but Hepburn came up with ha steal and then, while on the floor, fed Davis for a dunk and a 29-24 lead.

Not surprisingly, the Boilermakers attacked from the opening possession of the second half. They went on a 7-0 run in the first 1:19 to take the lead back and eventually pushed their lead to 49-42 before the Badgers fought back behind Davis.

UW trailed, 62-60, after Edey scored on a put-back with four minutes left. The Badgers called a timeout with 3:44 left.

Davis and Davison took over from there and UW had sent a statement to the rest of the Big Ten.