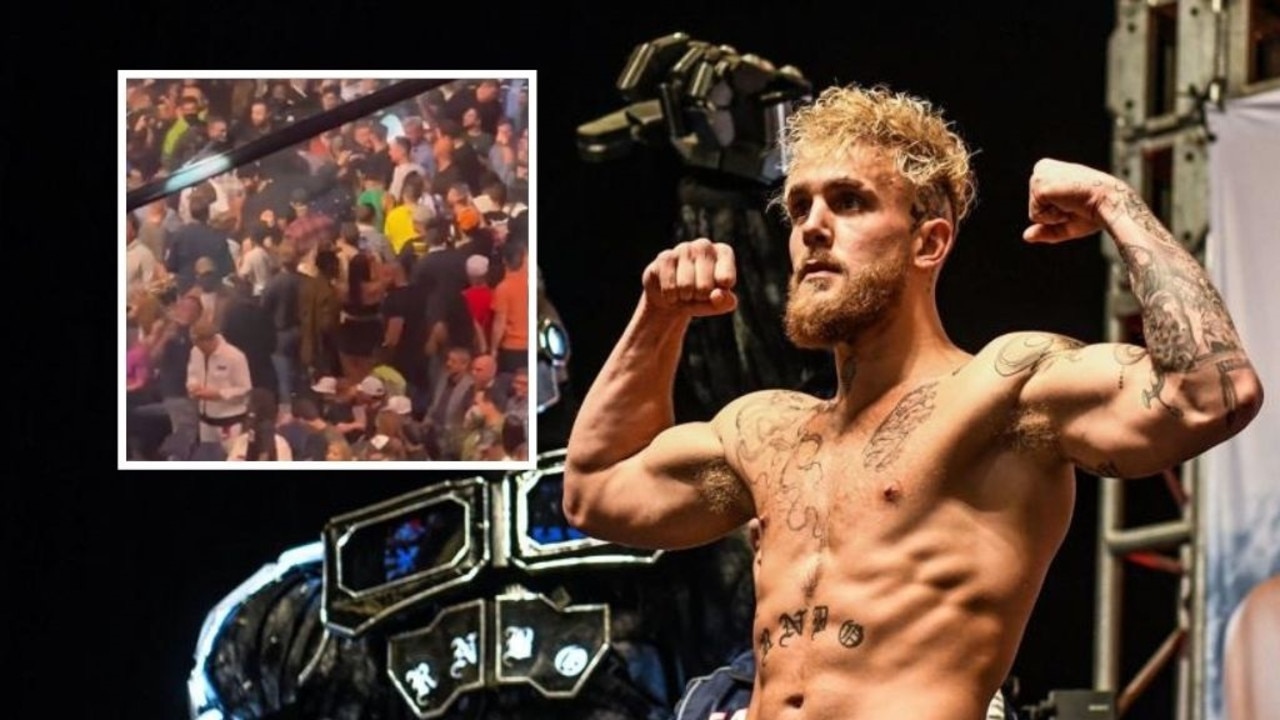 Jake Paul is confident of swatting away Tyron Woodley in their rematch, but there’s one influential figure who won’t be watching.

Welcome to our live coverage of Jake Paul’s fight against Tyron Woodley.

The YouTube sensation squares off against Woodley for the second time, having beaten the former UFC star via split decision back in August.

That victory extended Paul’s professional boxing record to 4-0 and he’ll be hoping to remain unbeaten after today’s clash in Cleveland.

Plenty of eyeballs will be on the bout but UFC boss Dana White is no fan of Paul, and shut him down at a press conference on Sunday after an MMA fight card in Las Vegas came to an end. “No,” he said when asked by a reporter if he was going to watch the social media sensation throw down with Woodley.

You can watch the fight by purchasing the pay-per-view for $39.95 via Kayo or Foxtel’s Main Event.

Social media stars Kodiyakredd and Flyysoulja — the “Island Boy” rappers — were reportedly caught up in some chaos in the crowd.

Paul enlisted the duo’s help to remix their famous tune and build up some hype for his fight against Woodley but they may have been too juiced up on Sunday.

Seated ringside in Cleveland, other fans in attendance reportedly started throwing drinks at them. Unconfirmed reports suggested they threw things back in retaliation, before being escorted out by security.

Amanda Serrano beat Miriam Gutierrez via unanimous decision in their 10-round lightweight bout.

Both fighters gave it everything, and late in the clash had blood streaming from their faces in what was an epic battle

NFL, NBA star knocked out of ring in boxing barnburner

Fans were baying for blood in the electric four-round showdown between ex-NFL star Frank Gore and former NBA player Deron Williams in what was both men’s boxing debut.

Late in the second round Gore was knocked down and fell through the ropes, out of the ring. Commentators were reminding the pair this was boxing, not the WWE.

Then it was Williams’ turn to get shoved out of the ring, nearly taking a tumble through the ropes too.

“What is going on?” one commentator said.

The pair were throwing haymakers at every opportunity. There was no being cagey and dancing around — it was all about throwing as many punches, as hard as they could, as often as possible.

Aussie Liam Paro made his mark on the undercard, extending his undefeated streak to 22 fights as he overcame Yomar Alamo via split deicison.

Two of the three judges favoured Paro’s work in the close contest, awarding him a 95-94, 94-95, 96-93 victory as he made an impressive comeback after suffering a first round knockdown.

Paro wanted to emulate George Kambosos, a fellow Aussie who put America on notice with his incredible win over Teofimo Lopez last month.

“He wanted the Aussie invasion to continue,” an American commentator said.

Paul is eyeing Floyd Mayweather’s crown as the richest fighter of all time — setting his sights on $1 billion in career earnings.

Mayweather retired officially in 2017 with a historic 50-0 record and as the pay-per-view king. His last fight, a 10th round stoppage against Conor McGregor is what he claimed made him a billionaire.

But for all Mayweather’s unrivalled ability and persona, he did not headline on pay-per-view until 2005, when he was aged 28 and 34 fights into his career.

Paul has divided opinions with his 4-0 record, but has been a box office hit from the start. What cannot be denied is his pulling power, selling 1.5m pay-per-views in his first-round knockout against ex-UFC welterweight Ben Askren.

Paul is confident the path he is currently on leaves him in a position to sensationally retire as the wealthiest fighter ever.

He told The Sun: “I do think I can hit the $1 billion prize-fighter mark, easily.

Paul debuted by blasting out online rival “AnEsonGib” in the first round in January 2020. He then followed it up with two showstopping KOs against ex-NBA star Nate Robinson and Askren, both 36.

His win over Askren proved to be the 10th highest-selling PPV fight of all time, only adding to Paul’s commercial value. He then went on to beat Woodley.

But despite the money to be made between the ropes, Paul warned he could hang up the gloves by 30 to start a family, and invest his time elsewhere.

He said: “It’s like, how long do I want to dedicate myself to these long, hard training camps? I see it happening for the next five, six years.

“But I want to have a family eventually. At the end of the day I’m an entrepreneur, so I can make money any way I want.

“It’s not like boxing is my only outlet. I’m doing it because I love it and I’m having fun.

“It would be nice to hit 10-0 and retire but we’ll see. This is just the start of my journey, not even the sky, there are no limits to this.

“I’m just enjoying each moment, each fight and taking it as I go.”