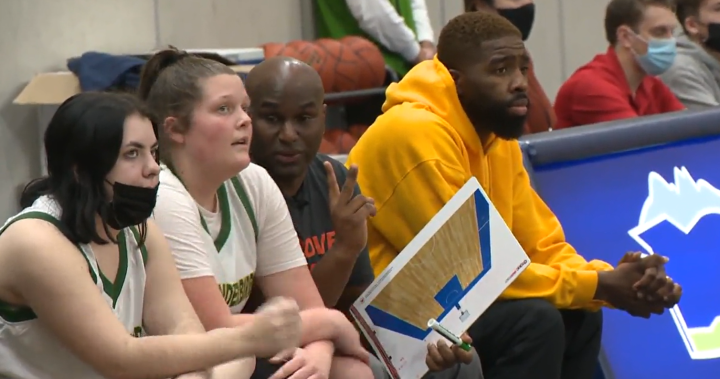 A beloved B.C. high school basketball coach is inspiring his athletes and peers by continuing to lead his team after losing his vision.

Sheldon Guy, who coaches the Langley Secondary School girls’ team, lost sight in his left eye three weeks ago because of an anterior ischemic optic neuropathy, or what he called “basically, a stroke in your eye.”

It happened six years after a different ailment took the vision from his right eye.

“I just didn’t understand, ‘Why me?’” he told Global News, in tears. “I didn’t know how to pivot … It’s the darkest place I’ve ever been in my whole life.”

This is BC: Langley women’s hockey team in a league of their own

After the diagnosis, Guy struggled to deal with his new reality, afraid and not wanting to burden family and friends. He gave up his coaching role.

This month, however, with the support of family, the school’s athletic director, and piles of messages from the girls on the team, he returned to the court.

“‘Coach we love you, we don’t care how you come back to us, we just want you back,’” said Guy, recalling all the messages of support.

Guy said he felt called back to basketball to inspire, to prove that challenges can be overcome, and to be there for his team.

From the sidelines at a game against the GW Graham Grizzlies, a high school team from Chilliwack, he offered his usual coaching and encouragement.

“We just got to work,” he said, praising the team and his son, Jayden, for guiding him so thoughtfully through the courts and keeping him safe.

Grizzlies coach Sarah Mouritzen has known Guy for about 10 years and said she’s thrilled to see him back in the game.

“He can’t see in front of him, he can’t see where the chair is, but he’s here because those girls asked him to be here,” she told Global News. “It’s beyond words. He’s doing it for them. It’s unbelievable.”

Guy can still see some shadows, but doctors have told him his vision will never be the same.

Naturopaths, however, have said there’s a chance he’ll be able to reclaim a percentage of his vision — a hope he intends to hold onto.