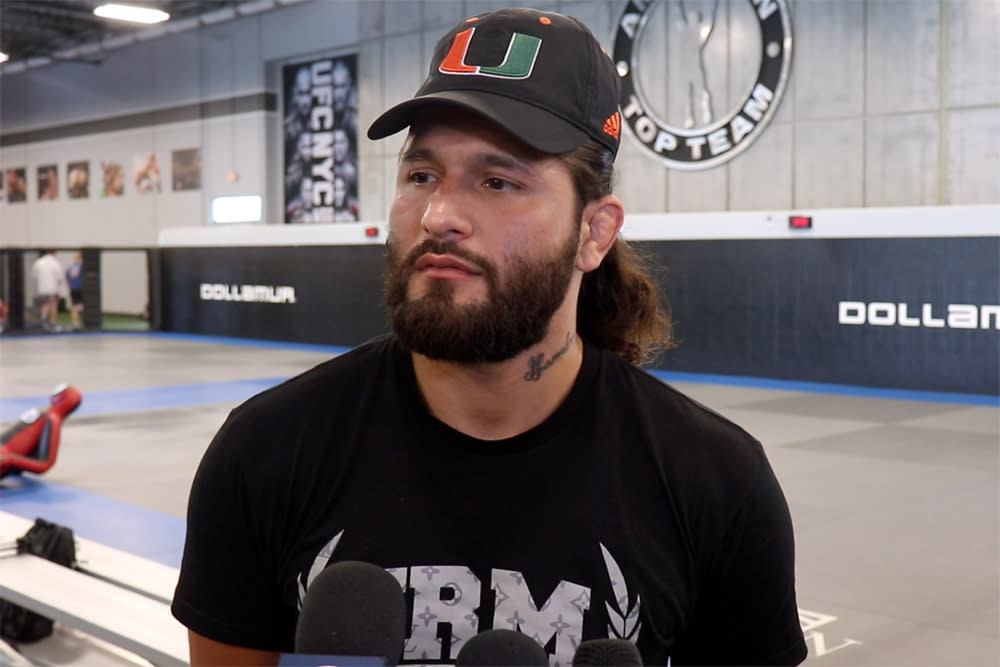 Jorge Masvidal recently did something he says he’s never done in his near-two-decade-long career. He pulled out of a fight.

Due to an undisclosed injury, Masvidal (35-15 MMA, 14-9 UFC) withdrew from his scheduled UFC 269 bout against Leon Edwards (19-2 MMA, 11-2 UFC), a grudge match between two of the welterweight division’s top-ranked fighters. While he continues to keep injury specifics under wraps, Masvidal revealed Wednesday his targeted timeline for return.

“(It was) a good injury,” Masvidal said on The MMA Hour. “A good injury happened. I don’t think I’ve ever signed a bout agreement and pulled out ever. In my whole history in the UFC, this is my first time. I don’t want to discuss the actual injury that I got. It should impact me for five to six weeks. The reason is that I never discuss my injuries online is, why? Why am I going to give info out on myself?”

In a perfect world, Masvidal would’ve pushed the fight with Edwards back six weeks – something he asked the UFC to do. However, he understands why Edwards is set on fighting champion Kamaru Usman next for the title rather than sitting out for Masvidal to heal.

“I told the UFC that we could push it back further,” Masvidal said. “It’s up to Leon, and from his initial response, he doesn’t want to wait and I don’t blame him. If he has an option to fight for a title or wait two more months for me, I don’t know what he wants to do or nor do I give a f*ck. All I know is if he wants to go February or March, we can go. If he doesn’t want to wait, then he’s onto the next thing.”

Sean Brady details overcoming recent health scare: ‘I thought I was going to lose my foot’

Edwards claims he knew Masvidal would withdraw from the fight, but “Gamebred” doesn’t understand the logic behind that. If Edwards means what he says, Masvidal thinks he should rebook the fight and find out.

“(Edwards) could respond to all of that and make all of that be true and known (by) just fighting in March,” Masvidal said. “Shut your mouth. Wait for me. Fight in March. Whatever, you know? I have history on my side. I’ve always made weight. I’ve never pulled out of a signed agreement. I have history on my side. First time, I’m coming off two losses. I’ve just got to make sure I go in there healthy and well to give it my all. If he wants to wait until February or March, I can decapitate him on sight for the world to see. If he doesn’t, I mean, what can I do, you know?”

If given a choice between Edwards and friend-turned-rival Colby Covington, Masvidal would choose the former. In his mind, he made an agreement and thinks he owes Edwards a scrap. Although, the prospect of getting his hands on Covington (16-3 MMA, 11-3 UFC) does sound enjoyable to Masvidal, too.

If it was right now on this particular date and time, I would say I’d beat Leon’s ass because I signed. I made an agreement as a man like, ‘Hey, I’m f*cking you up next.’ I want to hold (true) to that as much as possible. But if that’s not able to happen, of course I’d love to bash Colby’s face. We’re talking about the biggest coward in my sport, all across all divisions, all sports.

“This guy is the king coward. He can’t control himself from being a coward so I’d love to smash his face in and get a handsome reward from it. But at this particular time, since I signed first for Leon, I would like to address his b*tchass first and then we’ll take care of the fragile that guy. Now, he’s changing his thing where he’s a nice guy and sh*t. Usman beat his ass so hard and now he’s the nice guy. Damn, what a f*cking turn of events, huh? That f*cking coward.”