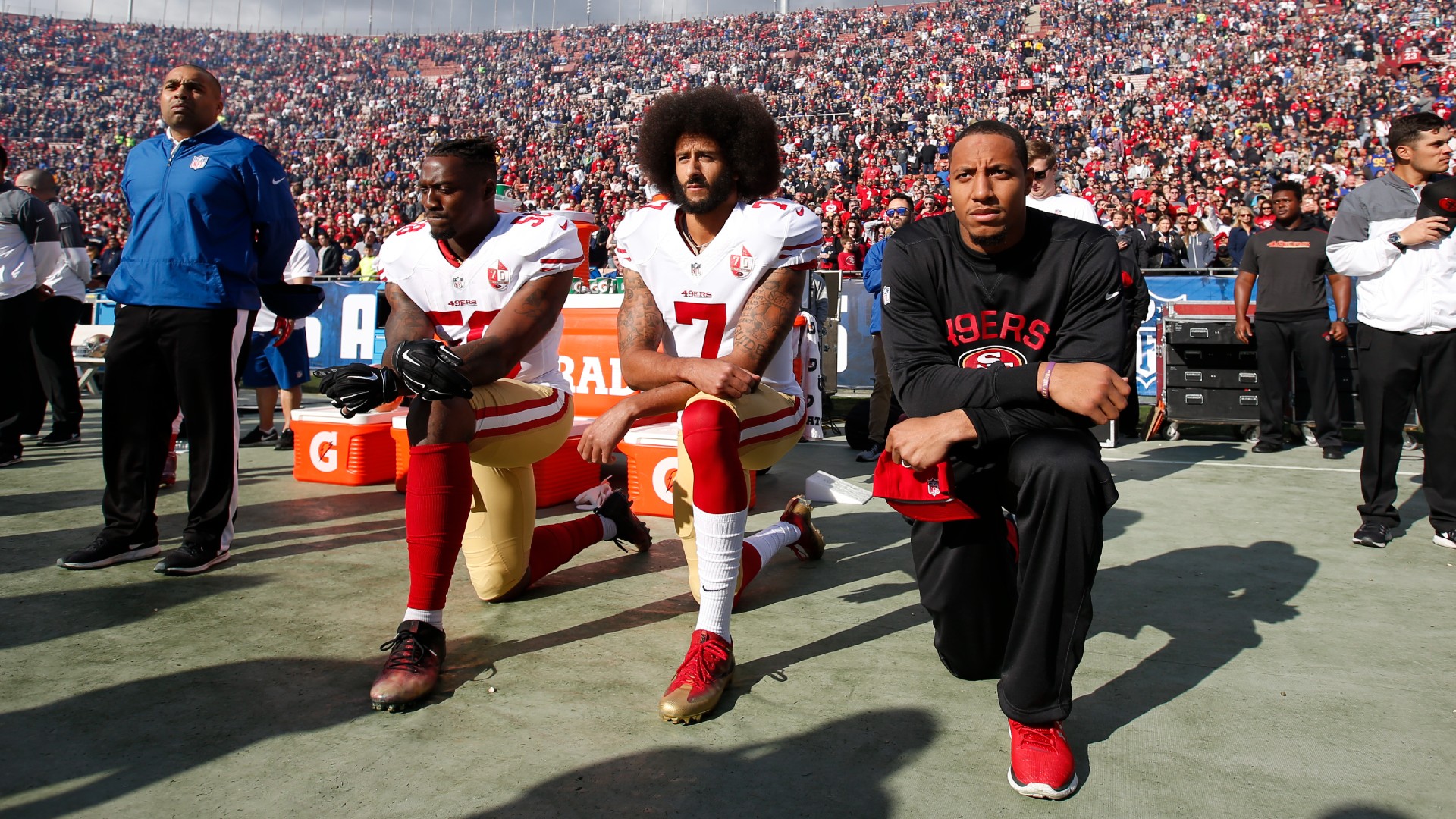 In the 1968 American Football League season, which began five months after Martin Luther King was assassinated on a hotel balcony in Memphis and one month before sprinters Tommie Smith and John Carlos made their silently powerful voices heard on the Olympic medal stand in Mexico City, an unknown player from the even less-known football program at Nebraska-Omaha played 11 games at quarterback for the Denver Broncos, threw 14 touchdown passes and was runner-up in the voting for AFL rookie of the year.

Marlin Briscoe never again played quarterback in professional football, though his career lasted until 1976, he earned two Super Bowl rings with the Miami Dolphins and was named to the Pro Bowl once. In his new book “Raise a Fist, Take a Knee,” released on Tuesday, author John Feinstein explains Briscoe discovered he no longer was a quarterback by showing up at team headquarters before his second season upon learning coach Lou Saban scheduled a quarterback camp in advance of training camp and did not invite Briscoe.

Briscoe arrived and found Saban “in a meeting”. When it ended, Saban walked out along with the team’s quarterbacks coach, two QBs who’d been on the roster the previous season and two others just added.

“No one would look me in the eye,” Briscoe told Feinstein. “In those days, there really wasn’t much you could do once a coach made a decision … So there was nothing for me to do except ask for my release and look for a job. I really thought, given what I’d done the year before, someone would give me a chance.”
They did, only at wide receiver. He threw only nine more passes in his career.

There are some who would like to see this conversation go away, even though it persists as a significant issue in the sporting world. Although Feinstein has produced multiple bestsellers among the 44 books he has written, he told Sporting News that five publishers rejected the idea, one without even bothering to look at a proposal.

So “Raise a Fist, Take a Knee” may not be the most popular book Feinstein has authored. It is the most important.

It’s such a massive issue spanning so great a period of our sports history, it could have filled the pages of an A-Z encyclopedia set. Taking on such a project would be daunting even without the political issues that surrounded it, which reached a crescendo with the murder of George Floyd by a Minneapolis policeman in May 2020, a tragedy that is echoed throughout the pages of Feinstein’s book.

“A lot of the people that I really thought I needed to talk to were people I didn’t know,” Feinstein said. “Usually when I start into a book, it’s usually – at least partly – because I know some of the people involved. And obviously I knew John Thompson, among others, but the hard part was making a list of people I wanted to talk to and realizing I wouldn’t get to speak with them all. I couldn’t write a complete history … So my first thought was I was going to write about how polarized the country was racially, but then as I was doing my reporting I realized it was like saying tomorrow was Tuesday. We all know that, right?

“So my goal kind of changed to trying to understand what it was like to be a Black person in 2021 – and even celebrities, even athletes, even coaches have to deal with that.”

Feinstein writes his first true encounter with the issue of race in sports came in October 1975, when he was a student at Duke writing articles on a part-time basis for the local paper, the Durham Herald-Sun. Feinstein was assigned to cover a Duke game against Army, and freshman quarterback Mike Dunn entered the game as a substitute and led a big touchdown drive that helped secure a victory. Both Feinstein’s articles were focused on Dunn. To his surprise upon reading the articles, though, editors inserted that Dunn was a “black freshman quarterback” instead of merely a “freshman quarterback” as Feinstein had written. When Feinstein told this story to Doug Williams, the first Black man to win a Super Bowl as a starting QB, Williams responded, “Boy, were you naive. Back then, a Black quarterback was a big deal anywhere, anytime.”

In researching the book, Feinstein spoke at length with Thompson, the first of his race to win the NCAA men’s basketball championship as head coach, before Thompson’s death in August 2020. Feinstein interviewed such transformational figures as James Harris, the first Black starter at quarterback in the NFL, Tony Dungy, the first Black coach to win a Super Bowl and Ozzie Newsome, the first Black general manager in the NFL, who is a Hall of Fame tight end and won two Super Bowls as a member of the Ravens front office.

“When I was in the eighth grade in 1970, I went to tryouts for Pop Warner football,” Newsome told Feinstein. “At the tryouts, they told us to go to whatever position group we wanted to try out for … I started to jog over to the quarterbacks – that was my position. Everyone standing there was white. I stopped and thought, ‘There’s no way they’re going to let me play quarterback.’ I knew that Marlin Briscoe had played the position for the Broncos in the AFL a couple of years earlier. I also knew he’d played well and they’d made him a wide receiver the next season. I went to where the wide receivers were.”

Feinstein acknowledges in the book he felt himself a curious candidate to write it, but he was encouraged by African-American acquaintances, friends and colleagues. Thompson told Feinstein he “must” do the book. Kevin Blackistone, who has worked for the Dallas Morning News, Washington Post, ESPN and as a professor at the University of Maryland, explained why it would work for Feinstein to write it.

“If I write this book, it will be written off by a lot of people as a Black guy trying to create racial issues that aren’t there,” Blackistone said. “Some people are going to accuse you of being a white guy doing the same thing. But it will be different.”

It is not a criticism of Feinstein’s book that some of the anecdotes begin to feel a bit repetitive. It’s more a sad reflection of how how even the most successful and prominent African American men can be squeezed into the same circumstances, over and over, with only the details changed.

DECOURCY: HBCU coaches not getting deserved looks from major programs

Nearly all the major figures Feinstein interviewed were able to share their own story of how regularly they have been stopped for DWB: “driving while Black.”

That is, until he introduces Olympic gold medal swimmer Cullen Jones, who was questioned by a police officer for walking his fancy dog near the fancy neighborhood where he lived.

“Everybody I talked to – everybody – had at least one story about DWB.”

The title of the book refers in part to the Carlos/Smith protests of 1968, when the two men raised their fists in the “Black Power” salute to protest the treatment of African Americans at a period in our history not long after the governor of Alabama, George Wallace, publicly proclaimed, “Segregation now, segregation tomorrow, segregation forever.” Smith and Carlos initially were expelled from the Olympics; now there is a statue to honor their statement on the San Jose State campus, where the two men attended college.

Does that mean all the issues that existed then have been resolved? Obviously, no. The second part of the title references the protest of 49ers quarterback Colin Kaepernick, who knelt during the national anthem before games of the 2016 NFL season. He initially chose to sit on the bench during the anthem before an exhibition game, then was encouraged to kneel by a former Marine, Nate Boyer, who thought it would be “more respectful.”

The following autumn, Kaepernick was out of the league and, as it turned out, never got another job in the NFL. President Donald Trump declared during a “rally” speech in Alabama that teams should fire any “son of a bitch” who continued to kneel for the anthem.

JARED ORDICK: Who do you cheer for?

“I was working on a quarterback book in 2017, so I was in an NFL stadium every Sunday,” Feinstein told SN. “Black guys would kneel, white people would boo. White people would complain they were ruining their enjoyment of football. Nobody interfered with the game in any way, and the game started on time.

“In Baltimore, the week after Trump’s rant, the players – all the players – took a knee before the anthem, and then stood up during the anthem. And they still got booed.

“On the one hand, we can see all sorts of tangible ways we’ve made progress, but still in 2018 Lamar Jackson was being told he was a wide receiver.”

At least someone believed in Jackson, a Heisman Trophy winner at Louisville. It happened to be Newsome, one of the few Black executives who have risen to such prominent roles in NFL front offices.

“It’s still a long way to go,” Feinstein said. “I hope – it’s going to be after we’re gone – people eventually look back at this the way people now look at slavery.”