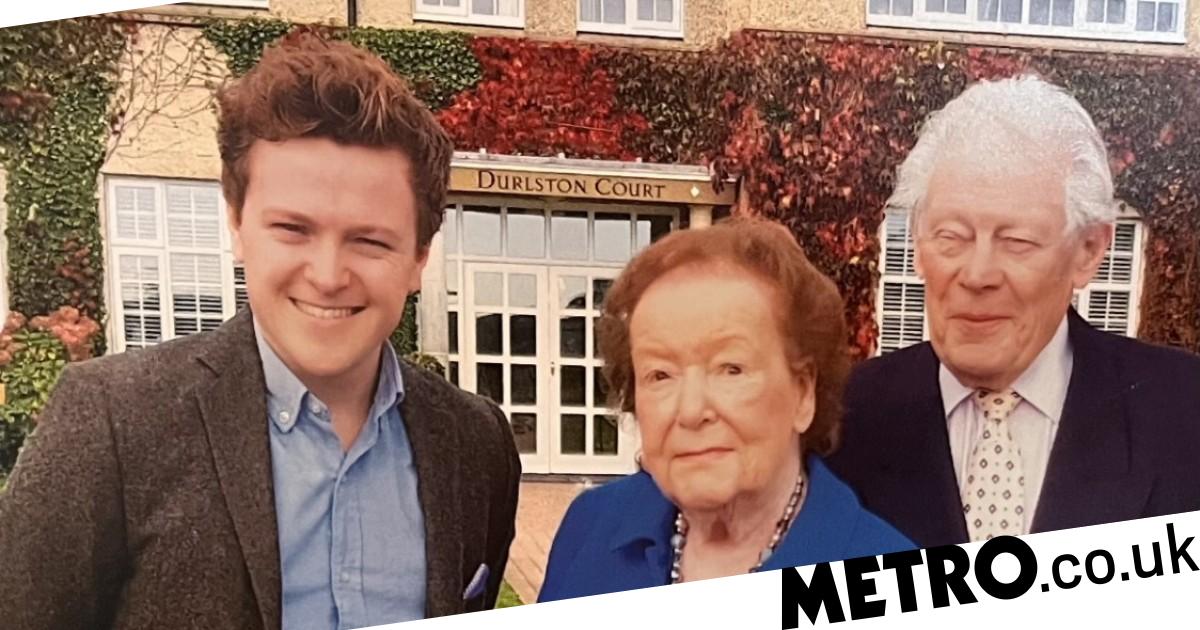 ‘Well, Jonny, this is strange, but I accept’.

My grandad had paused, looked me up and down, and taken a long swig on his favourite drink – whiskey and water (always with water) before he confirmed he would be my best man.

When I asked him, I thought he might spit out his dentures.

I was so thrilled at the response he actually gave me.

I got engaged last November after I proposed to my partner Lucy in our flat in Finsbury Park, where I sit typing right now. We’d been together for two years by then.

The original plan was to climb up to the top of Parliament Hill for sunrise on a Saturday morning and do the old get down on one knee. Naturally, this is England so it poured with rain on the day.

I then reverted to my solid rainproof plan B, which was to tell Lucy to stay in bed for half an hour while I coated the flat in every proposal decoration I managed to squeeze from Amazon into a next-day delivery basket.

I wore a suit, while she was in her pyjamas and we both cried. It was the most emotionally unstable smart-casual event both of us have ever attended.

After years of hating everyone who posts about their engagement on social media, I obviously went and posted ours on Twitter.

Post-engagement and self indulgent Twitter post, the questions from friends and family rolled in: Have you set a date? Where are you getting married? Can I bring my new boyfriend who you’ve never met? Who is the best man?

The latter I found a tricky one to pin down. Do I go with an old school friend? Do I go with someone I know will present some sort of hellish stag that will require a 12-week therapy session to recover from?

Or – as I initially mentioned as a joke to my fiancée – do I ask my 90-year-old, head of the family, king of the armchair, hero of the whiskey drinkers: my grandad? Yeah, why not.

So last week when I saw him – while I was sipping on a pint sized Heineken can (he has an eternal stock of these) and he drank away on his usual – our conversation about best man chat flowed.

I must say at this point, he isn’t your usual 90-year-old.

He was born on 12 October 1931, in Muswell Hill, just down the road from where I now live. In fact, a lot of his early dates with my gran took place around Manor House, Finsbury Park, Wood Green and Hampstead – ironically where my fiancée and I would get engaged and settle.

One of their favourite old North London haunts is today’s Rowan’s Tenpin Bowl and if anyone lives remotely near the area, they will understand the cultural significance of that weird and wonderful place.

In the 1890s, Rowans was actually a tramshed, then in the 1920s it was a cinema – you can still see part of the original ceiling upstairs. It was a dancehall in the 1960s, with The Beatles playing there in April 1963. I know all of this because my grandad told me.

What stops him being a normal 90-year old-is his incredible ability to recite anecdotes from the life of living in Westminster in the 50s, and nights out in Piccadilly in the 60s.

Long before the iPhone and WhatsApp, they would agree days in advance to meet at Turnpike Lane underground station and take the Tube in together before going out for dinner and dances.

Regardless of his nine decades on this planet, he’s sharp as a razor and can entertain the masses with hilarious anecdotes – the ultimate skill for a best man.

We discussed how his only requirement on the day will be to say a few words. I’m not expecting him to organise a charter speed boat up and down the River Thames, or an all-inclusive Benidorm long weekend for the stag.

He doesn’t need to usher drunk aunts around on the big day or even spend too much time on his feet. His only role will be when the microphone is passed down the top table, he will perform a small speech – something that anyone who knows him would agree is second nature.

So I actually agree with him to a certain extent – having a 90-year-old best man (or 91 by the time we get round to it) isn’t the most common of requests.

But isn’t the whole point of getting married to celebrate family, and love? I always thought a best man speech of brutal groom humiliation and horror ex-girlfriend anecdotes seemed a little ill-fitting for the day, so this is the path I’m going down instead.

Having said that, who knows what he will come out with.

With that in mind, I’ll look forward to raising one of many glasses on my big day and listening to the wise wonderful words of the eldest member of my (and soon to be Lucy’s) family – my grandad.


MORE : My grandad was the biggest ABBA fan but he died before we could listen to their new music together


MORE : Groom chooses very good boy Weller the dog to be his best man: ‘The day was perfect’


MORE : I lost my grandad to Covid – Matt Hancock shouldn’t have resigned, he should have been fired