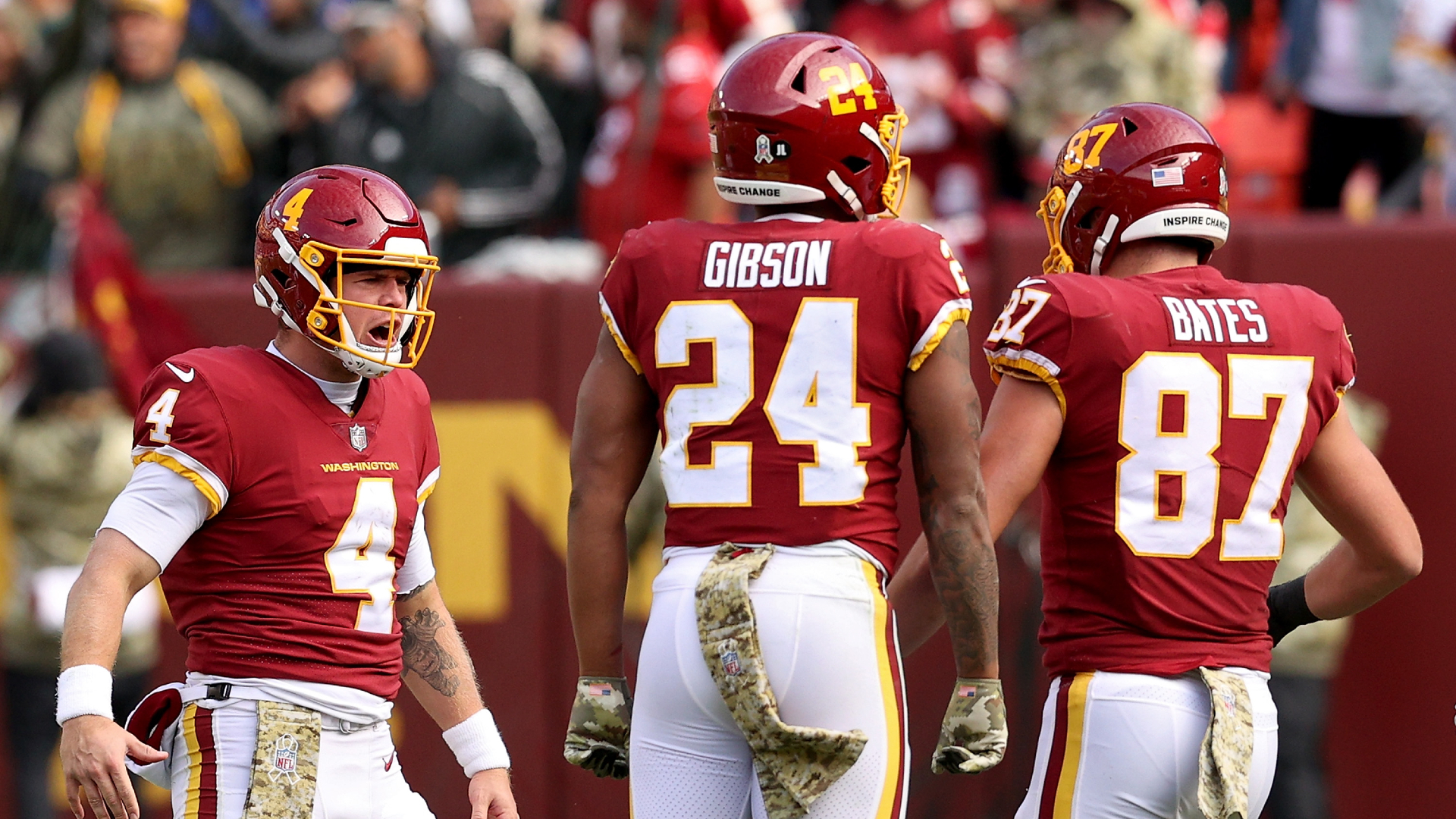 Tom Brady leads all NFL quarterbacks with an astounding 41 fourth-quarter comebacks. The Washington Football Team must have been keenly aware of this as its offense took the field with 10:55 left in the fourth quarter, nursing a 23-19 lead.

Brady took just 1 minute, 37 seconds to score on the Buccaneers’ previous offensive possession — and their last meaningful one of the game. He drove Tampa Bay 47 yards in three plays after a Dax Milne fumble, capping the drive with a 40-yard touchdown throw to Mike Evans. The score put the Bucs within a possession of taking the lead.

That was the scenario Washington quarterback Taylor Heinicke faced as he and the offense took the field. The unit — which to that point had only 240 yards of total offense and that costly turnover — responded with an 80-yard, 19-play touchdown drive that took an astounding 10:26 off the clock. By the time running back Antonio Gibson punched it in from a yard out, Brady had a mere 29 seconds to score 10 points: that’s too much, even for him.

Here is the final play of the drive, Gibson’s touchdown to make the score 29-19:

With that, Sporting News breaks down the drive that destroyed any hope Brady and the Bucs had of completing yet another heartbreaking comeback:

Any drive that takes 19 plays is impressive. But Washington’s was even more incredible for the simple reason the Buccaneers committed zero drive-extending penalties. (Conversely, in just the last two weeks, we’ve seen multiple drives extended because of penalties, including in Saints-Titans, Bengals-Jets and Bears-Steelers).

Credit to Tampa Bay for playing a relatively clean final possession. Credit also to Heinicke and Co. for completing the drive without the need for official interference.

Heinicke went a perfect 6 for 6 through the air in the drive, completing passes to five different receivers: Jerron McKissick, Terry McLaurin, John Bates, Adam Humphries and Gibson. He accounted for over half the yardage on the drive with 43 passing yards and two scrambles for 5 yards. He also converted two third-down attempts with his passes. Speaking of which . . .

The only failed third-down attempt was the last one of the drive, where Gibson came up a yard short of the goal line. WFT coach Ron “Riverboat” Rivera made perhaps his biggest gamble of the game, electing to go for it on the lone fourth-down attempt of the drive. The bet paid off as Gibson scored to give WFT the insurmountable lead.

Credit goes to Heinicke for his efficient final drive (he finished the game completing 26 of 36 passes for 256 yards and a score), but Gibson was also instrumental, rushing nine times for 30 yards. That includes a stretch of five plays in which he rushed four times (including one third-down conversion) and four straight rushes to end the drive, including the touchdown.

You don’t pull off clock-killing drives with tons of explosive plays, but it was still surprising to see the longest gain of the drive was a 16-yard completion to McLaurin. The completion came on the fourth play of the drive with Washington facing first-and-10 at its own 31. It was the only play of 10 yards or more. The second-longest plays of the drive were 6-yard completions from Heinicke to; McKissic, Bates and McLaurin, respectively.

That’s how many plays took place in Bucs territory: 14 of 19 on the drive, or 73.7 percent. For those counting at home, that’s an average of 3.5 yards per play. Not exactly impressive, but just enough for Washington to walk out of FedExField with the victory in hand.