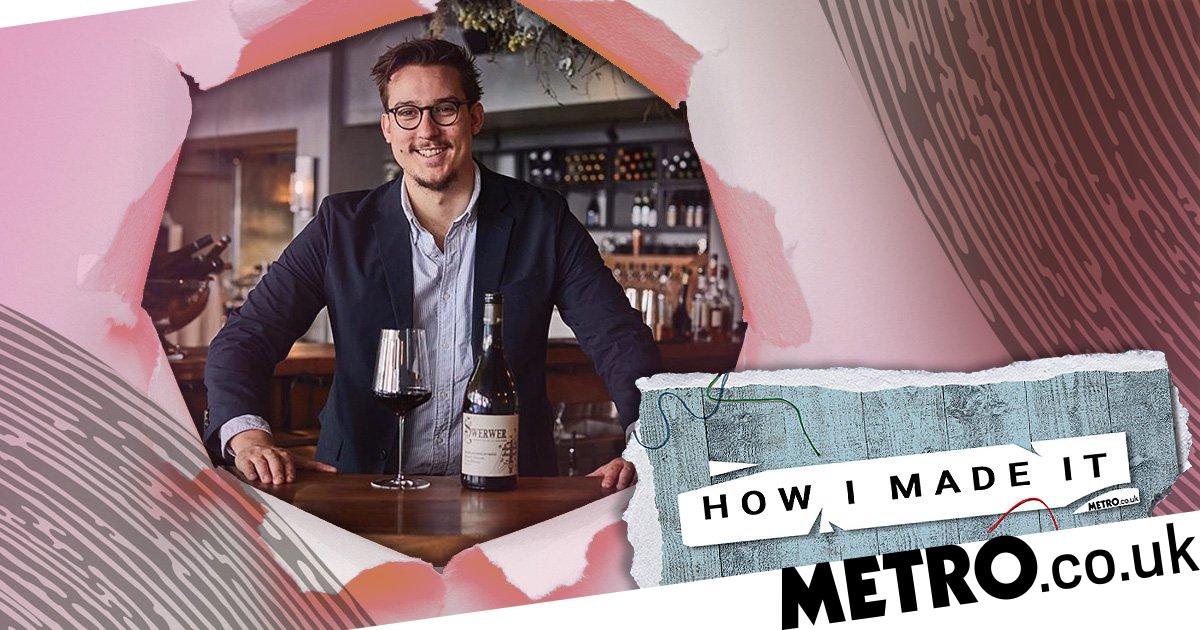 Welcome to Metro.co.uk’s new series, How I Made It, where, each Saturday, we’ll look at the interesting careers of those who’ve made headway in their industries.

Each week, we’ll profile someone new, giving insight into jobs that cover all kinds of niches.

First up is Bert Blaize, a Hertfordshire-based freelance wine consultant who works mostly in London and Staffordshire (his home county).

The 33-year-old has worked his way up from being a sommelier to now a consultant – though he says this job title can come ‘with a bad rep’ in the wine world, given the long hard hours sommeliers work that are customer-facing, for less money. Wages can range anywhere from £28k to £80k.

‘When I was a sommelier I used to take the piss out of consultants, but now I’m on the other side because I want to get my weekends and my nights back,’ he says.

Credit where credit is due though, Bert certainly has paid his dues as a sommelier, being one for around seven years before switching in his early 30s to consulting.

‘It’s a weird lifestyle,’ Bert tells Metro.co.uk of life in the wine trade, given the sheer amount of alcohol there is to taste and work with. ‘And I also had a bit of a weird career path.’

Hey, Bert. How did you get into the wine industry?

I studied Computer Game Design at university, then went to work at Activision – the big gaming company makes Call of Duty – and got my name on the credits for a James Bond film, then left after everyone got made redundant.

I was so bored sat in front of a computer all day. I can’t do that, I need to be in my feet and interacting with people and travelling, otherwise I will literally fall asleep – and I did do that a lot at my desk.

I found it more tiresome to sit at a computer than to be running around doing a 14 hours shift on my feet. I moved into restaurants to raise beer money, then I found it left me feeling buzzed.

What made you think of this career choice?

I fell into it – there wasn’t an epiphany moment and no one in my family is in the industry. My mum is a ceramic artist and my dad is a plumber.

So I got a job at my local restaurant and just worked my way up to becoming restaurant manager.

I also met a chef in a restaurant and he was very inspiring. I didn’t have a mentor at that time, but he pushed me and kept me in the industry – otherwise I might have left. Then I went on to do a wine training course and was a sommelier.

A typical day in the working life of Bert Blaize

8am: Wake up. Though Bert is often up late due to work, he still has meetings and places to get to during regular working hours.

9-10am: Go to a wine tasting. He’ll taste around 50 wines (spitting them out so as not to get drunk), then grab breakfast.

12pm: Depending on Bert’s projects, this shifts. He could be buying wine at cost price, charging 5% commission, for celebrities and private clients looking to get their hands on fine wine at a lower cost through Bert’s connections. It could also be curating a wine menu for a venue.

Over the rest of the afternoon: Meet with restaurants and put together proposed wine lists for clients.

Evening: Go to a work dinner, for networking and social opportunities.

9pm: Reply to emails and work through until bedtime.

Why did you move from being a sommelier to a consultant?

I’ve put the graft in, working all available hours, tasting and reading up about wine on days off, and entering competitions. I won multiple, including a Young Sommelier award in 2017.

I just kept going and wanting to be in the best places.

I kept pushing and pushing, until about two or three years ago when I got very tired because I burnt myself out, so that’s when I started consulting.

At one of my previous restaurants I’d start at 9am and finish 2am and I’d have 20 minutes in the day to use the toilet, eat, text a loved one and let my mum know I’m still alive.

How is freelance life?

It’s stressful and tough – but now I have some control back.

I’m in a place now where I can pick or choose what I work on. For the right position, I’d even consider going back to work full-time at a top restaurant.

One of my current project involves working for Keythorpe Hall in Leicester, where I tailor the wine each individual guest has for a personalised experience – no two menus are the same. They’ve called me a ‘wine concierge’.

I also co-authored a book, Which Wine When, which was the product of a drunken conversation over Guinness because my phone is full of all my friends repeatedly asking which wine to buy for different occasions.

Now I send them a link to the book.

In the future, there may be a second installment coming.

You seem to travel a lot – is that part of the job?

I work mainly across London, Nottingham, Leicestershire and Staffordshire.

Pre-pandemic I’d travel to Italy a lot in search of new wines.

But in the UK there’s a divide between the North and Midlands with the South – though there are exceptions with Michelin star restaurants.

It’s a contentious subject… You don’t normally get English sommeliers – I was a rarity – they’re usually French, Italian or Spanish, so trying to get a French person to live in Stoke-on-Trent (my hometown)…

Is there anything you don’t like about working in wine?

The wine industry is every elitist and has a huge sexism issue – I see it all the time.

I often turn up to work events in a Smiths band t-shirt, and even as a white man, due to my midlands background, I’m looked down on.

There’s a lack of diversity – I hate that.

Are you doing anything to try to change it?

I recently set up a BYO event to encourage more people into the industry.

I just want good people to come in and to help create a support network.

The aim is to make it a regular event and there is a demand for it – tickets for the first one sold out.

How much do you drink in a week?

When I went to the dentist I had to fill in a form about how many units I have and mine was high, and my dentist was really interested in why. Normally it’s quite a shock for people when they hear how often I drink.

Do you worry about your health?

Now I try to to be plant-based and not drink alcohol Monday to Friday, especially if I’m at home. I find if you don’t do that you just put on loads of weight and you’re an absolute mess, so you have to be strict on yourself.

I’m very controlled with alcohol – I have to be. I have certain days I let my hair down like everyone else, but I’m very controlled and I think there’s a lot of people who aren’t and struggle, it’s really sad. I think if you haven’t got that the industry isn’t right for you.

Overall, how do you feel about your job?

I’ve turned my hobby into a career – and that’s great.

Do you have an interesting job you fancy chatting about? Or did you take an unconventional path to get where you are today?

If you fancy taking part in How I Made It, email Tanyel.Mustafa@metro.co.uk.


MORE : The best cheese and wine pairings for Christmas feasting


MORE : Festive freebies on offer in London this week including mulled wine and cocktails


MORE : Woman shares how to cut a mango without wasting any of it using wine glass hack