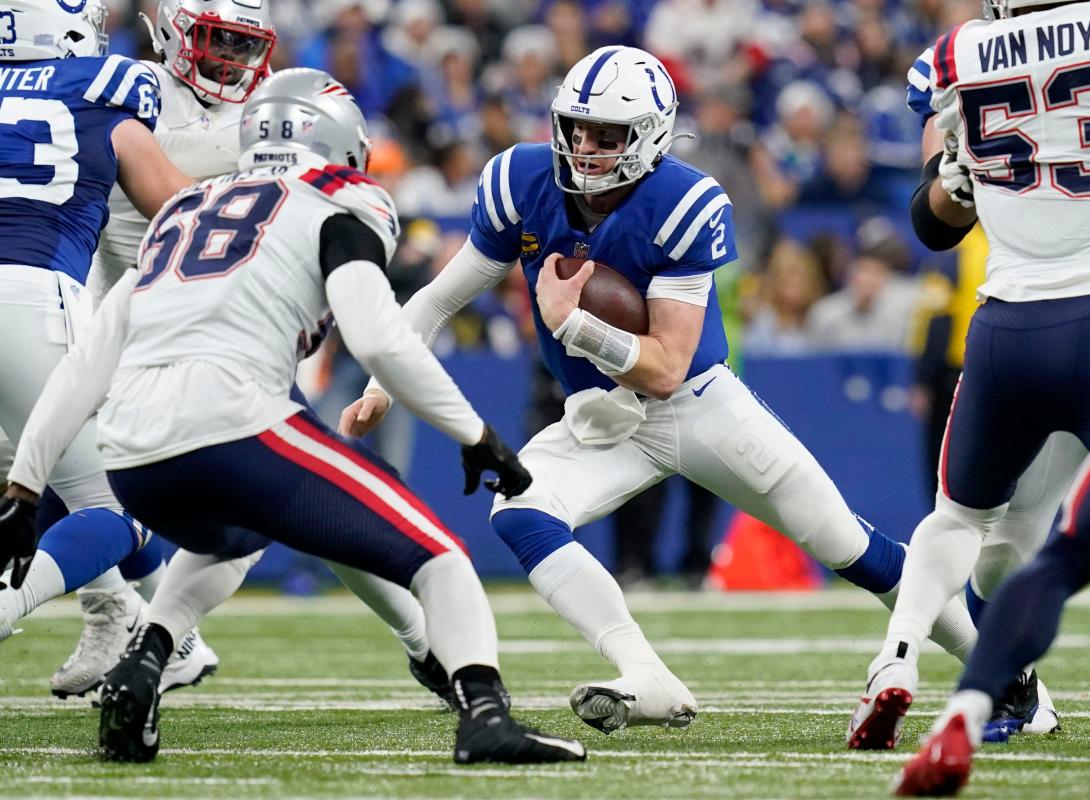 Now that it’s certain that the Eagles will end up with a first-round pick for Carson Wentz, they can revel in the fact that they are getting much more than that, even though Wentz has played well enough for the Indianapolis Colts.

That’s because Wentz isn’t much better than the quarterback the Eagles currently have in Jalen Hurts – and that’s in the context of not fully knowing whether Hurts is the Eagles’ franchise quarterback.

SIMILAR, BUT DIFFERENT: Eagles’ playoff run reminds veterans of 2019, but with major twists beyond DeVonta Smith

It’s also in the context that both quarterbacks might become the latest in a trend in the NFL: the placeholder quarterback.

Those are quarterbacks who aren’t necessarily the franchise quarterback, but are still good enough to win with for the foreseeable future.

Yet as a placeholder, Hurts is a much better value than Wentz. Hurts is still on his rookie contract, counting only $1.6 million against the salary cap in 2022. That’s more than $26 million less than Wentz will count on the Colts’ cap in 2022.

Wentz’s performance Saturday in the Colts’ 27-17 win over New England certainly didn’t scream franchise QB. Wentz was 5-for-12 passing for 47 yards with a touchdown and interception.

Yet by playing the entire game, Wentz guarantees that he’ll play at least 75% of the Colts’ offensive snaps this season, thus turning the second-round pick the Colts were giving the Eagles from their trade last February into a first-round pick.

The Colts also gave the Eagles a third-round pick in the 2021 draft.

The Colts beat the Patriots more because of Jonathan Taylor rushing for 170 yards, the special teams unit recovering a blocked punt in the end zone, and the defense intercepting quarterback Mac Jones twice.

Sure, the Colts (8-6) are most likely heading to the playoffs, and the win over New England (9-5) was certainly impressive. All of that makes Wentz a success as a placeholder.

But the Eagles (6-7) will be in line for a playoff spot, too, especially with a win over Washington on Tuesday in a game delayed two days by a COVID-19 outbreak among the Football Team.

There is nothing wrong with the placeholder strategy. In fact, it has worked well in the past. Look no further than the Kansas City Chiefs, who made the playoffs in four of five seasons with Alex Smith at quarterback before Patrick Mahomes took over.

The Chiefs built the surrounding cast around Smith until Mahomes was ready to take over. The Chiefs have made it to two straight Super Bowls, winning one.

Washington appears to be following the same plan with Taylor Heinicke.

In the draft last spring, Washington, picking 19th, could have traded up to get in position to draft either Jones or Justin Fields. Instead, the Football Team stuck with Heinicke and drafted linebacker Jamin Davis.

There are merits to that decision. Washington, like the Eagles, is 6-7, and in playoff contention. Davis has contributed as a rookie, playing 57% of the snaps on defense and starting seven of the 13 games.

Heinicke, meanwhile, has completed 66.5% of his passes, with 19 touchdowns and 12 interceptions, and a passer rating of 89.9.

This is where the Eagles’ three first-round picks could lead to an interesting decision. They could package those picks and move up into the top 5 or 10 to draft a quarterback, or possibly even trade the picks for someone like Watson or Seattle’s Russell Wilson.

But the Eagles have more pressing needs than quarterback, especially on defense. So there’s something to be said for sticking with Hurts in 2022 and using those picks to address the other needs.

In addition, it’s looking like none of the Eagles’ first-round picks will be in the top 10. In fact, none might be in the top 20 if the Eagles, Colts and Miami Dolphins all make the playoffs.

The Eagles got the Dolphins’ pick last spring by trading back from No. 6 in the first round to No. 12.

So it’s conceivable that the Eagles can bring back Hurts as the starter for 2022, then perhaps trade one of their first-round picks to get an extra one in 2023 and thus go after a quarterback then.

Or they can keep going with Hurts for at least the next two years while fortifying the rest of the roster while Hurts is still on his rookie contract.

That salary cap flexibility is a great commodity to have, especially if the Eagles want to spend heavily in free agency.

That, of course, makes Hurts a much more valuable placeholder than Wentz.

Wilmington native Wendell Smallwood has bounced around quite a bit since spending three seasons with the the Eagles, rushing for a total of 850 yards from 2016-18.

He spent the 2019 season with Washington, then all but one last season on Pittsburgh’s practice squad, except for one game. Then Jacksonville signed him to its practice squad midway through this season.

But Washington signed him late last month, and Smallwood got into his second game since 2019 against the Raiders on Dec. 5. He carried the ball once for 13 yards, his first carry since 2019.

Smallwood was among the many players placed on the COVID-19 list last week.

WFT coach Ron Rivera said it was a no-brainer to bring back Smallwood.

“When you have a guy like that, that means a lot. It really does,” Rivera said. “Especially a guy who’s a smart football player, a veteran guy with experience, who can pick up the system very quickly, which he did.”

We have already seen that there’s no way of knowing who will be eligible to play, let alone how they’ll play.

On Sunday, Eagles left guard Landon Dickerson went on the COVID-19 list. But earlier in the day, starting wide receiver Quez Watkins came off of it. If Dickerson can’t play, the Eagles will go with Sua Opeta, their third starting left guard this season.

As of last Friday, that probably wouldn’t have mattered as WFT had 23 players on the COVID-19 list. That included seven defensive linemen. Since then starters Montez Sweat, Jonathan Allen and Casey Toohill came off the list.

So did defensive lineman Matt Ioannidis on Monday. But Pro Bowl guard Brandon Scherff was added to the list, along with seven assistant coaches.

We still don’t know who’ll be playing quarterback as Heinicke and his backup Kyle Allen are on the COVID-19 list. If neither can play, then it’s either practice-squad QB Kyle Shurmur, who has never played in an NFL game, or Garrett Gilbert, signed late last week off of New England’s practice squad.

All of this is mind-numbing.

So we’ll just break it down like this: The Eagles were beyond upset that the game was postponed, and they’d like nothing better than to take it out on WFT, especially with a playoff spot at stake.

And the two extra days should enable Hurts to return, along with running backs Miles Sanders and Jordan Howard. And no one has stopped their NFL-best running attack yet.