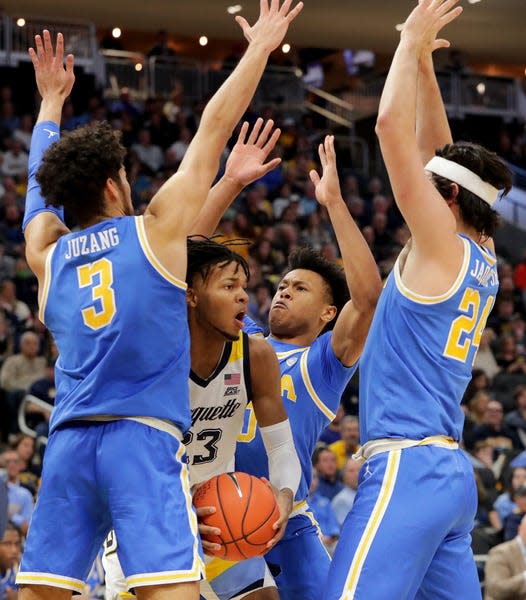 An ugly start to the game put MU in a hole and the Bruins cruised to a 67-56 victory at Fiserv Forum.

The game was delayed by seven hours after UCLA (8-1) had trouble getting to Milwaukee. The Bruins spent Friday night in Denver after a crack was detected in the cockpit windshield of the team’s plane.

In the first half, it was MU’s offense that was missing in action.

Darryl Morsell hit a three to give the Golden Eagles (8-3) a 3-1 lead 1 minute 7 seconds into the game. But after that, MU went frigid, going into a scoreless drought of five minutes that ended when Oso Ighodaro put back a jumper.

UCLA looked like it was going to run the Golden Eagles out of the gym, going up 33-10 with 3:10 left in the first half. MU was shooting an eye-gouging 1 for 16 on three-pointers at that point.

But Greg Elliott gave the Golden Eagles the spark they desperately needed. He hit a three, then found center Kur Kuath on an alley-oop and added another triple.

Elliott sank another three right before the buzzer and MU went into the break down 35-21. Elliott shot 3 for 5 in the first half while his teammates combined for 4 for 26.

UCLA’s Jamie Jaquez Jr. had 14 points to lead the Bruins in the first half.

Elliott was inserted into the opening lineup in the second half. He hit a three-pointer just over a minute later to pull MU within 37-26.

But Johnny Juzang answered with a triple of his own. Juzang later hit a layup after a steal and then knocked down another three that gave UCLA a 52-30 lead and appeared to quell MU’s hopes of a comeback.

The Golden Eagles had another burst to get within 56-42 on a three-pointer by Kam Jones and then 57-44 on a layup from Olivier-Maxence Prosper.

Elliott matched his collegiate high of 17 points early in the second half and then reached 20 when he knocked down a three that closed the gap to 62-50.

The Golden Eagles finally got the deficit down to single digits in the final minute.

Elliott finished with 22. Jaquez had 24 for UCLA.

DOWNLOAD THE APP: Get the latest news, sports and more