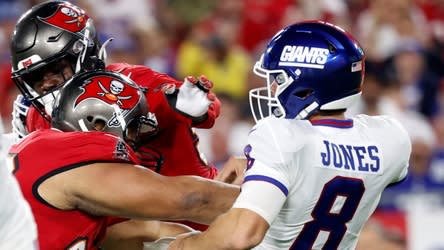 The Giants finally got most of their offensive weapons back.

And somehow, the offense still stinks.

It was like a slow-motion train wreck watching them try to move the ball in their ugly, 30-10 loss to the Tampa Bay Buccaneers on Monday night. They had only 215 total yards and got mostly nothing out of their top stars like Saquon Barkley (56 total yards), Kenny Golladay (one 12-yard catch) and Kadarius Toney (7-40).

In fact, they wouldn’t have even scored if Tom Brady hadn’t doinked a pass off the chest of receiver Mike Evans that turned into an interception by cornerback Adoree’ Jackson. That set the Giants up at the 5 and led to a touchdown pass to tackle Andrew Thomas. That would’ve been a nice, fun moment if it wasn’t the only big play the Giants offense had.

Their whole approach was really mindboggling. They were facing a Bucs team with a vulnerable, banged-up secondary and they rarely even tried to attack them, choosing a dink-and-dunk strategy that worked against the Raiders before the bye, but that was when many of the Giants’ best weapons were still hurt.

Barkley, playing his first game in six weeks, was a complete non-factor and was mostly ignored at the start of the game. And the fact that they only targeted Golladay twice? Why did they give him a $72 million contract again?

It was really a disjointed game plan by beleaguered offensive coordinator Jason Garrett, who looked like he wasn’t sure how to incorporate all of his offensive toys. And it didn’t help matters that quarterback Daniel Jones looked off, completing 22 of 38 passes for 167 yards, the one touchdown to his tackle and two hideous interceptions.

The worst was one of the worst interceptions of his career – maybe one of the worst any Giants quarterback has ever thrown. In the third quarter, Jones rolled to the right and looked like he was trying to throw back across the field, maybe to Barkley. But under pressure he threw off his back foot and very short. The only players in the area were center Billy Price and Bucs DT Steve McLendon.

McLendon, the ex-Jet, even seemed surprise when the ball landed in his chest.

This has reached the inexcusable point. Injuries were a fair excuse for most of the season, but everyone was back except for receiver Sterling Shepard and this is all this offense can produce? The NFL has turned into an explosive passing league, but right now it looks like it’s just passing the Giants by.

It’s embarrassing. And if this is the best the Giants’ offense can do, even against a soft schedule they’re not going to win many games the rest of the way.