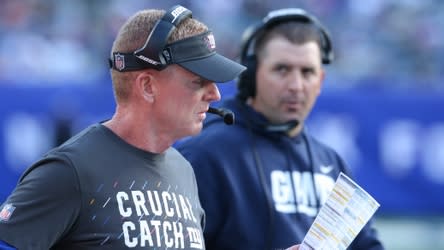 The excuse the Giants have been using for most of the past two years is that their best offensive players haven’t been healthy. Wait until they were all back, they insisted. Then everyone will see how good they can be.

Well, on Monday night, they had everybody except for receiver Sterling Shepard and this is how good the Giants offense is: They had 215 total yards. Their only touchdown came on a five-yard drive thanks to a very fortunate interception. And their only touchdown catch came from their left tackle.

It was inexplicably, inconceivably bad.

Really, pick a word, any word: Atrocious, hideous, and definitely inexcusable. It’s almost impossible that in one of the most explosive offensive eras the NFL has ever known the Giants can be as low-powered as this. And if it wasn’t clear before their 30-10 loss in Tampa Bay, it certainly has to be now:

The Giants need to make a major offensive change.

And after the game, Joe Judge sure made it sound like one might be on the way.

The easiest solution at this point would be to fire offensive coordinator Jason Garrett, or at least let someone else on his staff start calling plays. Judge seemed to hint at a possible shakeup when he said after the game that “We have too many good players” to be that bad. He put this loss squarely on his coaches and admitted “I get frustrated for the players.”

Asked directly if he still has faith in Garrett, Judge said “I have faith in all the people on our team” and added “We’ll assess everything.” He did not offer Garrett any direct vote of confidence when he was given the chance.

That’s telling, and it should be, because something has to be done. Judge is right: The Giants have too many weapons to be as bad as they are. Garrett, for whatever reason, just hasn’t gotten it done. And if for some reason Judge doesn’t want to make the big change, then he at least needs to have a big, soul-searching conversation with his 55-year-old offensive coordinator about what he wants this offense to be.

Because in 26 games now with Garrett running the offense the Giants offense simply has no discernible identity. They are averaging 18 points per game. They have scored 30 only once.

That’s as mind-boggling and mind-numbing as his game plan was on Monday night – if he indeed had a plan. It certainly wasn’t to do what the Giants always say they want to do – establish the run behind Saquon Barkley. Because in his “welcome back” game, Barkley rushed only six times. And it didn’t seem to be to go after the Bucs’ banged-up secondary, which is what they should have been doing. Otherwise, you’d think their $72 million receiver, Kenny Golladay, would be targeted more than twice – which Judge correctly noted “wasn’t enough.”

It all seemed like it was darts being thrown at the wall. The only down-field pass all night was thrown by rookie receiver Kadarius Toney – a nice gadget play out of the Wildcat, though maybe it would’ve worked if the one throwing the pass was quarterback Daniel Jones. On a crucial 4th and 1 at the Bucs 25, the only receiver on the field was Collin Johnson, who should’ve ranked behind seventh on the list of possible options. That wouldn’t have mattered if the Giants tried to run for the ball. When they didn’t, the play not surprisingly blew up.

Garrett, of course, has been under fire before, but all the injuries provided cover. It also helped that he was John Mara’s preferred choice for offensive coordinator and seemed destined for the job even before Judge was hired. Even if Judge wanted to bring in his own guy, it was going to be impossible for him to make that change after just one year.

But now there may not be much to prevent Judge from doing it, if that’s what he wants to do. This was a new low for an offense that keeps lowering its own bar. The offense cupboard isn’t exactly empty. They had a first-round quarterback, first-round running back, first-round receiver and first-round tight end on the field, with a first-round left tackle doing the blocking, and a receiver who got one of the biggest contracts of free agency last March.

That’s not nothing. They have invested a lot to build this offense up. It’s inconceivable that this late in his second season that it’s somehow getting worse.

So something has to change – and something big. Maybe that’ll be Garrett’s job status or maybe he’ll stick around and just hand off the play calling to Freddie Kitchens, the former Browns head coach who is the Giants’ senior offensive assistant and likely next man up. But this offensive disaster can not be allowed to continue. It’s a waste of all the talent they have on the roster.

Something has to change. And for the first time, Judge actually sounded like something will.