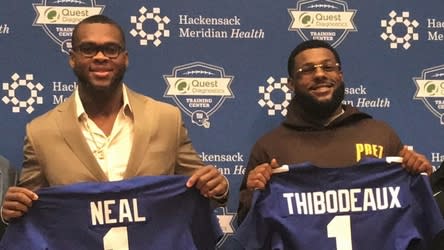 Thibodeaux — the No. 5 total decide and former Oregon Ducks edge rusher — is ready to signal a four-year, $31.3 million contract with a $20 million signing bonus, Vacchiano reported.

Meanwhile, Neal — the No. 7 total decide and ex-Alabama Crimson Tide offensive sort out — will ink a four-year, $24.6 million deal that features $15 million at signing, Vacchiano mentioned.

Both have fifth-year choices for the crew, in accordance with Vacchiano.

Neal met with the media Saturday because the Giants accomplished rookie minicamp.

“It feels great just to go out there, get back in the right-tackle stance,” Neal mentioned. “[I haven’t played] right tackle since my sophomore year, so brought back some pretty good nostalgia. So it’s just really good, man. Practice on an NFL team. It don’t get better than that. So, definitely, my dreams came true. Just excited, for sure.”

“I mean, I savor every moment,” Thibodeaux mentioned. “Man, when you’ve been through everything in life that’s brought you to this point, it’s like, ‘Dude, MetLife (Stadium), the American Dream (mall), the New York Giants. Are you serious?’ You know what I mean? I can’t even see (the Empire State Building) ’cause it’s all this greatness right here, you know? So, for me, it’s like — it’s a dream come true.”