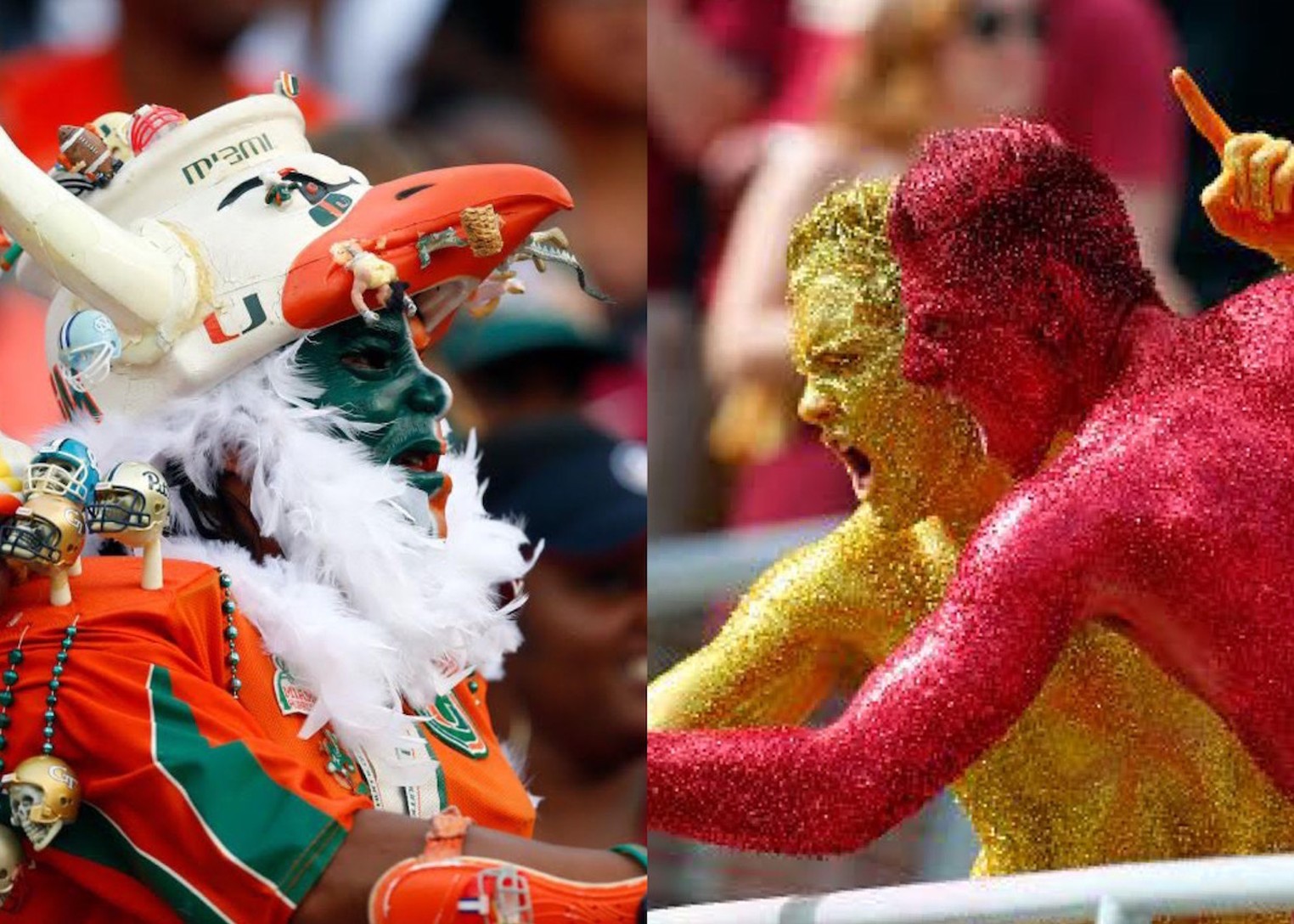 It’s Miami-FSU week, and that can mean only one thing: Title implications! Two teams enter, but only one continues on the path to a National Championship!

The University of Miami Hurricanes and Florida State University Seminoles aren’t competing for a national anything right now, and probably won’t be anytime soon.

The fact that UM (5-4) and FSU (3-6) aren’t anywhere close to title contenders this year doesn’t change the fact that these two rivals will face off for the 66th time at 3:30 p.m. this Saturday at Doak Campbell Stadium in Tallahassee. It’s an annual Florida football tradition — good or bad — that has stood the test of time.

While most fans will focus on the typical trash talk, Miami and FSU actually have more in common than one may realize.

Here are five things every Miami and FSU fan can agree on. Because what our country needs right now is unity, not division. And, naturally, it starts with college football.

Nobody Likes the Florida Gators

You’ve heard the saying, ‘the enemy of my enemy is my friend,’ right? A little-known fact is that the saying most likely dates back to the Florida Gators. They’re the common enemy. They are the ones everyone actually hates.

Miami and FSU fans can agree — for different reasons — that the University of Florida football team is the worst.

Miami-FSU Is the Best Rivalry in College Football

What can two rivals agree on? That they’re the best rivalry in all the land. Ask any Hurricanes or Seminoles fan what the greatest rivalry in college football is and their answer will be UM-FSU.

Why? Because for the better part of two decades, this game determined whether either team would remain a title contender. Not only is it still appointment television, it’s the greatest rivalry in the state with the most football talent in the country.

Plain and simple: Miami-FSU may not take place in the best conference or be the biggest game of the year, but when you go looking for memorable moments of a college football rivalry, good luck topping the ones FSU and Miami have put on tape in just a few decades.

Other rivalries have been going on since players wore leather helmets, but if you run to YouTube, the highlights won’t come anywhere close to UM-FSU.

In the heyday of the UM-FSU rivalry, both rosters were full of players from the Sunshine State. Miami would recruit from West Palm Beach down, and FSU would bring in much of the rest of the talent in the state that didn’t go to Florida. A huge part of the rivalry was the fact that many of the players at UM and FSU had played against each other since they were literally children, so playing in front of 70,000 people took their games, and the rivalry, to the next level.

Now, Alabama and Georgia are swooping in and stealing kids that should be Miami Hurricanes from birth. FSU is losing players to schools they never would have dreamed of kids picking over them, like Ole Miss. Most fans won’t admit it, but it would be better for both schools if a player picked FSU or Miami instead of Alabama. At least the ACC, and Florida, would shine.

For Miami-FSU to regain the heat it once had, somehow, some way, both schools need to start keeping talent in Florida — and away from the SEC.

Dalvin Cook is on fire.

There are now a combined 48 players in the NFL who went to Miami or Florida State. That may seem like a lot, but that combined number has actually tailed off over the years as both teams haven’t been as good as they once were.

Not only that, but Miami and FSU put skill position players in the NFL — not just a bunch of linemen and back-up corners.

We’re willing to bet if there was a study done that tallied the number of players Miami and FSU have put in the NFL since 1980, no two teams combined have contributed more impact players to the league. That fact may not remain long, as Alabama and many SEC teams put double-digit players in the NFL every year, but averaged out over three decades, Miami and FSU have to be close to the top, if not right there.

No two schools have provided NFL fans more players to love than Miami and FSU.

College football is fine as-is, but as Miami and FSU have trended down the past few seasons, the sport has seemed to be lacking a bit of, well, swagger. There isn’t the same juice to it all as there once was.

There is just something about Notre Dame or Alabama playing the outcasts from down south. LSU or Georgia playing Alabama just feels like a couple of cousins doing battle. Florida State and a high-powered offense taking on a tough defensive-minded Big 10 team just feels like more of a show than what we’re seeing these days.

Miami and FSU fans will be at odds this weekend, but for once it seems that the two sides agree on much more than they disagree on, regardless of which team wins.