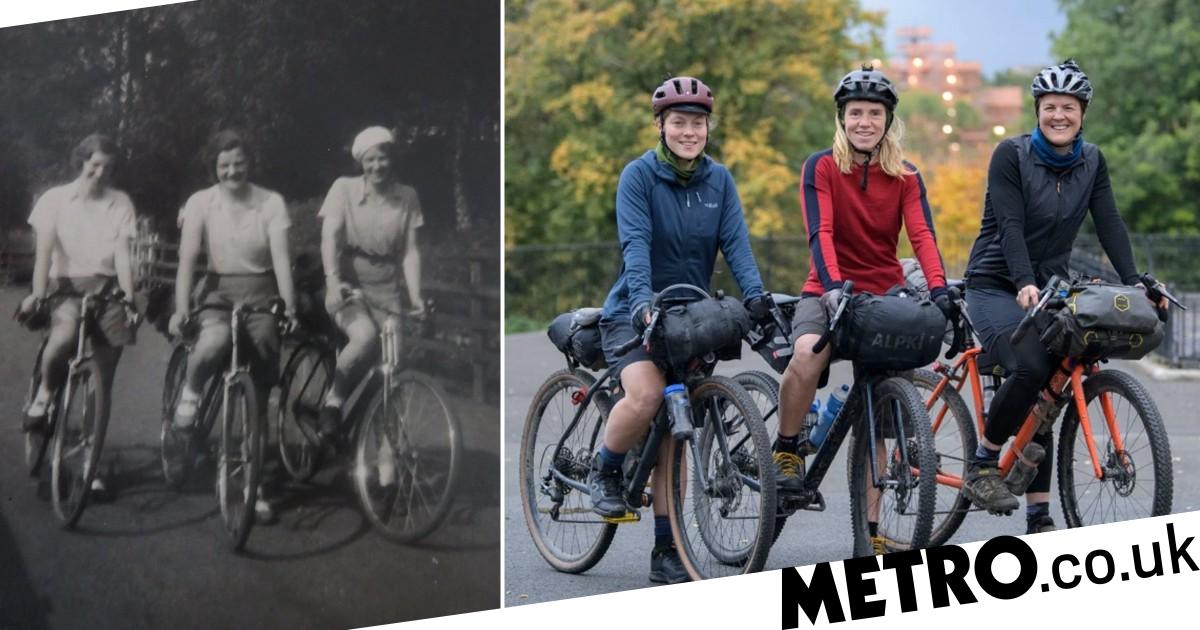 Forget a cushy week at Center Parcs – back in the 1930s teenagers had to create their own adventures.

Which is exactly what 17-year-old Lanarkshire lass Mary Harvie and her two sisters did in 1936 when they embarked on a 500-mile cycling tour of the Scottish Highlands.

‘Complete with haversack and camera, we start the climb of Ben More – 3,842ft. We added another stone to the cairn… and had a lovely view all around Loch Lomond, Ireland and the Trossachs,’ reads an extract from Mary’s diary, which was recently donated to Hostelling Scotland by her son, Harvie Paterson.

To celebrate Scotland’s Year of Stories 2022, Hostelling Scotland (which turns 90 this year) called upon the Adventure Syndicate – a collective of women endurance riders who promote mental and physical wellbeing through their cycling challenges – to retrace the Harvie sisters’ original trip.

Alice Lemkes, Lee Craigie and Philippa Battye formed the three-strong team who, like Mary, started in Glasgow and rode up through the Trossachs, Crianlarich (‘Gateway to the Highlands’), Glencoe, Portree on the Isle of Skye, Torridon and Gairloch, before finishing amid the snowy peaks of Aviemore in the Cairngorms.

They wrote a daily journal, posted on social media and have just released
a video of their adventure.

Unlike the Harvie sisters, who were forever dealing with punctures, the trio rode gravel bikes with drop handlebars and wide tyres designed to handle everything from tarmac roads to rocky forest trails.

‘We tried to stay off-road as much as possible and made sure we stuck broadly to Mary’s route,’ says Alice. ‘While her diary entries were like “the sun burnt holes in us” and “we bathed in every river we passed”, we did the trip during a particularly wet October and got drenched every single day.’

It’s not a trip for the faint-hearted.

‘The roads Mary took, especially around Loch Ness and Glencoe, are now packed with traffic but back in the 1930s it must have been incredible,’ says Alice.

‘There were times we had to carry our bikes over steep sections or through bogs but it means you get to areas that are so secluded, so beautiful and quiet, that it’s all worth it. And when you ride in a group, the rest of the team brings you out of any grumpiness or frustration. Philippa suggested we swim in this mountain loch and we all went in, in just our pants and helmets, which was fun.’

‘We have this idea that in the 1930s it was a big pioneering adventure,’ says Alice, ‘but she was just an independently spirited person who took herself off and did it.’

Membership of Hostelling Scotland from £15 per year, hostellingscotland.org. See theadventuresyndicate.com.