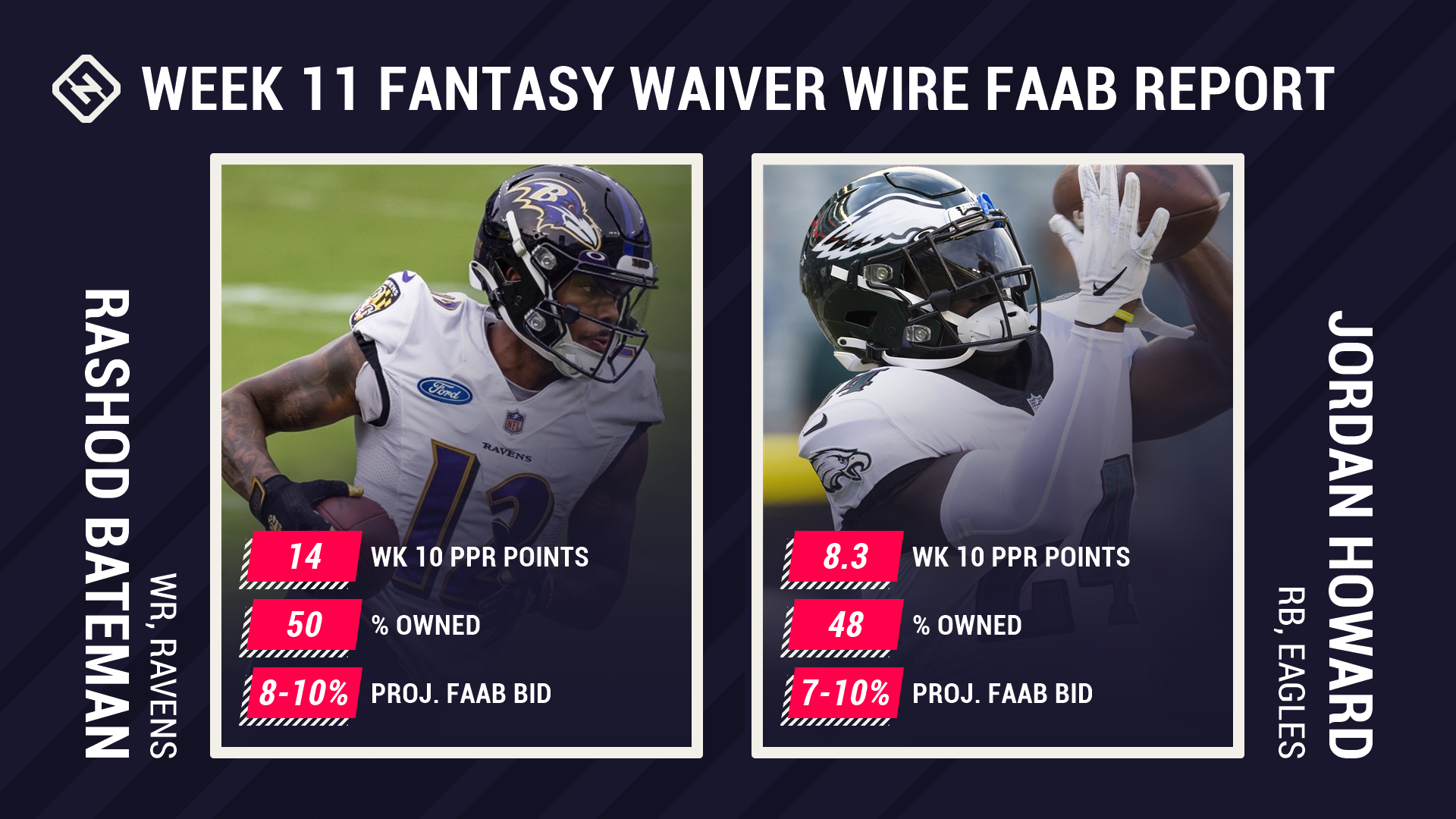 If there was ever a week to save your FAAB budget or waiver wire claims, this is the week to do so. There aren’t many priority Week 11 fantasy waiver pickups, so if you don’t need a fill-in, you should probably stay out of the fray and focus on cheap free agents. However, if you are desperate for a player or two at a certain position, then you might actually have to bid up the likes of Rhamondre Stevenson, Jordan Howard, D’Onta Foreman, Rashod Bateman, Elijah Moore, or Cam Newton more than they deserve.

As we’ll do every week this season with the help of our friends at Fantasy Alarm, let’s break down the top pickups and project how much of your FAAB budget you should bid on them.

DOMINATE YOUR LEAGUE: Get the Fantasy Alarm NFL Season Pass!

Mac Jones (NE). Earlier in the season, Jones was struggling to finish drives and looked like a rookie. That’s expected. But last Sunday, we really saw him shine against a decent Browns defense. The passing volume wasn’t there for Jones, but he looked every bit the part of an NFL quarterback. He completed 19-of-23 pass attempts for just 198 yards, but he connected for three touchdowns, as well. New England has won four straight games, and it gets the Falcons on Thursday before enduring a slightly more difficult schedule after Thanksgiving. Jones is getting better and better as the season progresses. Projected FAAB Bid: 6-7% of total budget

Tua Tagovailoa (MIA). There aren’t many quarterback options available this week to feel great about, but with the Dolphins playing last Thursday, there’s extra time for Tua (finger) to heal up. Even though he didn’t start last week’s game, he came on in relief and threw for 158 yards and ran in a touchdown. The Dolphins play the Jets next week, and while this could be an ugly game all around, the Jets have allowed five straight quarterbacks to throw for at least 250 yards and multiple touchdowns. Proj. FAAB Bid: 6%

Cam Newton (CAR). Newton made his triumphant return to the Panthers this week, and despite the late-week signing, he made an impact, running and throwing for a touchdown. The usage was minimal, but with Sam Darnold (shoulder) hurt, there’s an opportunity for Newton to rekindle the old flame in Carolina. Give him a full week of practice to get ready, and let’s see what he can do against Washington next week. Proj. FAAB Bid: 5-6%

Rhamondre Stevenson (NE). Stevenson is largely available everywhere, and he looked fantastic on Sunday. He rushed for 100 yards on 20 carries and found the end zone twice. The fact that he was involved in the passing game was a pleasant surprise. He was actually more involved than Damien Harris typically is. The bad news is that when Harris (concussion) returns, it’s likely he gets a majority of carries. Players don’t typically lose their job because of injury, and as great as Stevenson looked, he seems unlikely to take over the job completely. Regardless, he will be among the most added waiver wire options this week. Projected FAAB Bid: 15-20% of total FAAB budget

D’Onta Foreman (TEN). It’s tough to justify spending a premium amount of FAAB money on Foreman this week. However, he looked like the lead running back for Tennessee last Sunday, totaling 13 touches and 78 yards in just his second appearance this year with the Titans. He, Adrian Peterson, and Jeremy McNichols basically split the snaps out of the backfield, but Foreman led the team in carries, so that’s somewhat of a promising sign. Proj. FAAB Bid: 10-13%

Devonta Freeman (BAL). The Ravens looked awful last Thursday night; however, Freeman continued to shoulder most of the work in the Baltimore backfield even if his streak of scoring in three straight games came to an end. Some difficult divisional matchups are on the horizon, but Freeman should continue to see his ownership rise based on the workload he’s getting. Proj. FAAB Bid: 10%

Jordan Howard and Boston Scott (PHI). Sunday marked the third straight game where Howard rushed at least 12 times, and while he didn’t find the end zone, he did put up 83 yards. Boston Scott saw double-digit carries, as well, and was more involved in the passing attack, which is to be expected. The Eagles offense isn’t always consistent, but Howard should get at least a dozen carries every week as long as Miles Sanders (ankle) is out. Scott will likely get a similar amount of touches. Because we don’t know when Sanders will be back, these backs are worth owning. Proj. FAAB Bid: 7-10%

Wayne Gallman (ATL). Gallman is worth a speculative add, as he led the team in carries on Sunday. Given that Cordarrelle Patterson (ankle) could miss Thursday’s game, there’s more intrigue in Gallman, but the matchup against New England is worrisome. Proj. FAAB Bid: 3-4%

Elijah Moore (NYJ). Moore has now scored four times in his past four games. In that span he also has at least six targets in each contest. The yardage totals have been so-so thus far, but we’re seeing the Jets actively try and get the ball in his hands. The Jets have matchups against Miami, Houston, and Philadelphia coming up, and these could be prime spots for Moore to keep coming through for fantasy. Projected FAAB Bid: 10-11% of total FAAB budget

Rashod Bateman (BAL). Bateman was quiet for most of Thursday’s game against Miami, but the offense finally started clicking when he was getting looks late in the game. He now has back-to-back games with eight targets and at least six targets in all four of his games. He hasn’t found the end zone yet, but clearly the offense gets things going when Bateman’s involved. Proj. FAAB Bid: 8-10%

Van Jefferson (LAR). Following the acquisition of Odell Beckham Jr., the stock was pretty low on Jefferson. But after the injury to Robert Woods (knee) late last week, Jefferson’s stock quickly went back up. However, as OBJ gets up to speed with the playbook, you have to imagine the Rams get him more involved with the offense. Proj. FAAB Bid: 5%

Robby Anderson (CAR). We haven’t really seen that massive big-play upside from Anderson since Week 1, but with Cam Newton returning to Carolina, maybe we see him get more looks because Sam Darnold certainly wasn’t helping the cause. As the Panthers mixed P.J. Walker and Newton into the game, Anderson finished with four catches on six targets and he found the end zone. Newton will work with the first-team offense this week, so it sounds like he’s in line to start against Washington. Let’s see what happens from here. Proj. FAAB Bid: 4-5%

Gabriel Davis (BUF). Davis isn’t a slam dunk because when the Bills are at full strength, he’s maybe the fifth pass-catching option in this offense behind Stefon Diggs, Cole Beasley, Emmanuel Sanders, and Dawson Knox. Beasley was limited all last week with a rib injury and didn’t play a single snap in the second half while the Bills were blowing out the Jets. Davis went over 100 yards, and while he saw just three targets and clearly made the most of them. When Beasley’s at full strength, we should expect to see his usual workload and double-digit targets, but Davis is worth having on your radar. Proj. FAAB Bid: 2%

Josh Gordon (KC). Gordon has made no impact so far during his tenure with the Chiefs. He certainly hasn’t been a must-add, but Sunday night’s involvement was a good sign of things that could possibly come to be. Did he get a target? Nope, but he was on the field for 33 offensive snaps and ran more routes than Mecole Hardman. If the Chiefs continue to get Gordon reps, then we can assume they’ll want to get him more targets as he becomes more familiar with the offense. Proj. FAAB Bid: 2-3%

Marcus Johnson (TEN). Likely only a deep-league add, Johnson looked like the best positional player on Tennessee in Week 10, catching five passes for 100 yards. Granted, a lot of the success can be credited to the matchup, but he gets another solid matchup next week, as well. Julio Jones (hamstring) is on IR, which means he’ll miss the next couple games. If he regresses to being nothing more than depth at the position for Tennessee, then he’s a drop that costs you nothing, but the opportunity for him to excel is certainly there. Proj. FAAB Bid: 1-2%

Dan Arnold (JAC). Arnold isn’t touchdown dependent. Entering Sunday, here’s how Arnold ranked among tight ends over his past four games: Third in targets, third in catches, fifth in yards. He had a bit of a slow start to last Sunday’s game against the Colts, but ultimately he still finished with a strong stat line of five catches on seven targets for 67 yards and a two-point conversion. Arnold is too good to consistently appear in this article. Projected FAAB Bid: 10-12% of total FAAB budget

Adam Trautman (NO). Since the Saints were forced into starting a new quarterback following Jameis Winston’s injury, Trautman has seen an increased role in the offense. Trevor Siemian isn’t very good, as he makes some questionable decisions, but one decision that isn’t questionable is the attention he gives to Trautman. He has at least six targets in three straight games and nine catches over his past two. Things are finally looking up for Trautman. Proj. FAAB Bid: 4-5%

Cole Kmet (CHI). If you miss out on Arnold, Kmet is a decent consolation prize. Considering the Bears are coming off their bye week, Kmet may be a forgotten commodity. In Week 9 against Pittsburgh, he caught six-of-eight targets for 87 yards, and overall he’s been trending in the right direction. Proj. FAAB Bid: 3-5%

As we always caution, you shouldn’t spend more than one percent of your FAAB budget on a D/ST. Here are this week’s potential streaming pickups: