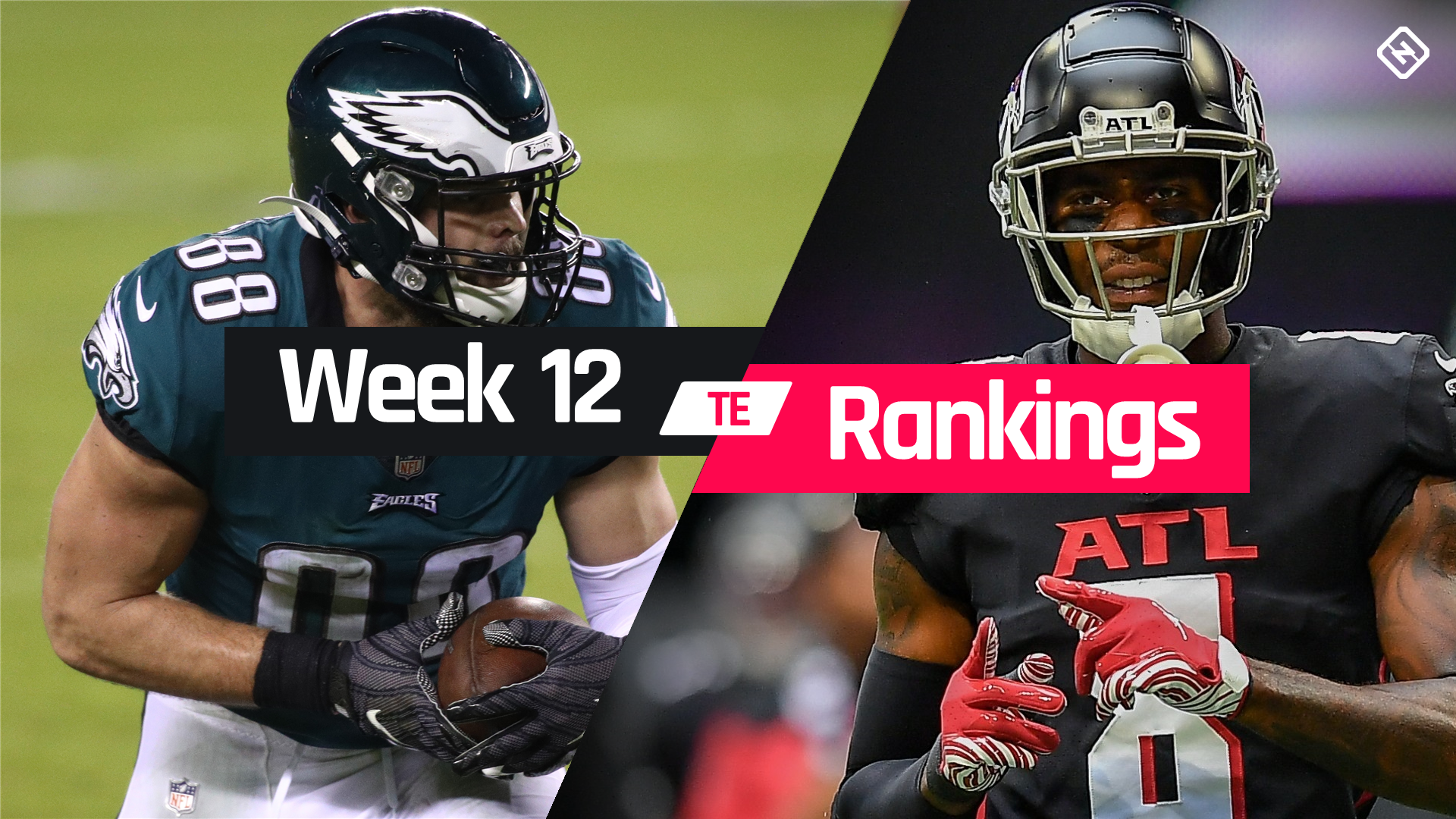 It’s that time of the week to sort out the mess at tight end, and superstar Travis Kelce being on a bye just sets the stage for the tough times ahead. Nonetheless, we’re still tasked with figuring out the pecking order of our Week 12 fantasy TE rankings, which will hopefully help you find some sleepers and streamers to target.

As mentioned, Kelce is out of action, but we should also note Zach Ertz is out, too. Noah Fant (vs. Chargers) and Tyler Higbee (@ Packers) are back from bye, and both have at least decent matchups right away. Streaming is synonymous with this position, so let’s get right to it.

Dan Arnold (vs. Falcons), Cole Kmet (@ Lions), Evan Engram (vs. Eagles), Austin Hooper (@ Ravens), and, if healthy, Logan Thomas (vs. Seahawks) are the best options when considering guys under who are under 60-percent owned in Yahoo leagues. However, Engram and Hooper are really the only ones among this group with exceptional matchups, as they face two of the top-three defenses in fantasy points per game allowed to tight ends. Some of the other best matchups this week are hogged by studs and duds (as we’ll discuss below). The Falcons, Lions, and Seahawks defenses are at least OK against tight ends, but the production of Arnold, potential of Kmet, and perceived upside of Thomas keep them ahead of others in more favorable situations, at least in standard leagues.

If we’re looking more strictly at matchups, Jack Doyle and Mo-Alie Cox (vs. Buccaneers), Gerald Everett (@ Washington), and Tommy Tremble (@ Dolphins) have have some of the best for tight ends. It’s also worth noting O.J. Howard and Cameron Brate (@ Colts) are in that mix if Rob Gronkowski (back) is out. The problem is, no one among this group is even close to dependable — even in solid matchups. We’d rather play the guys above with less favorable matchups based on what we’ve seen thus far.

Dalton Schultz (vs. Raiders) and Noah Fant (vs. Chargers) haven’t always been dependable options either, but they’re still higher-floor players than those we just mentioned in addition to having highly favorable matchups. Schultz looks especially good with Amari Cooper (COVID) out and CeeDee Lamb (concussion) in danger of being inactive, too.

Tyler Conklin (@ 49ers), Pat Freiermuth (@ Bengals), and C.J. Uzomah (vs. Steelers) have all emerged as popular tight ends in recent weeks, but the matchups justify sitting them in Week 12. None are “safe” enough to be trusted against top-12 TE defenses. Freiermuth has more value in PPR leagues, though, so you might still want to use him there.

Hopefully, we demonstrated how difficult things are going to be at TE this week. We tend to focus on matchups at this position, but they only mean so much if a player is hardly targeted in his respective offense.

Note: We’ll be updating these TE rankings throughout the week, so check back for the latest player movement and analysis.

Fantasy TE Rankings Week 12: Who to start at tight end

Rankings based on standard, non-PPR scoring