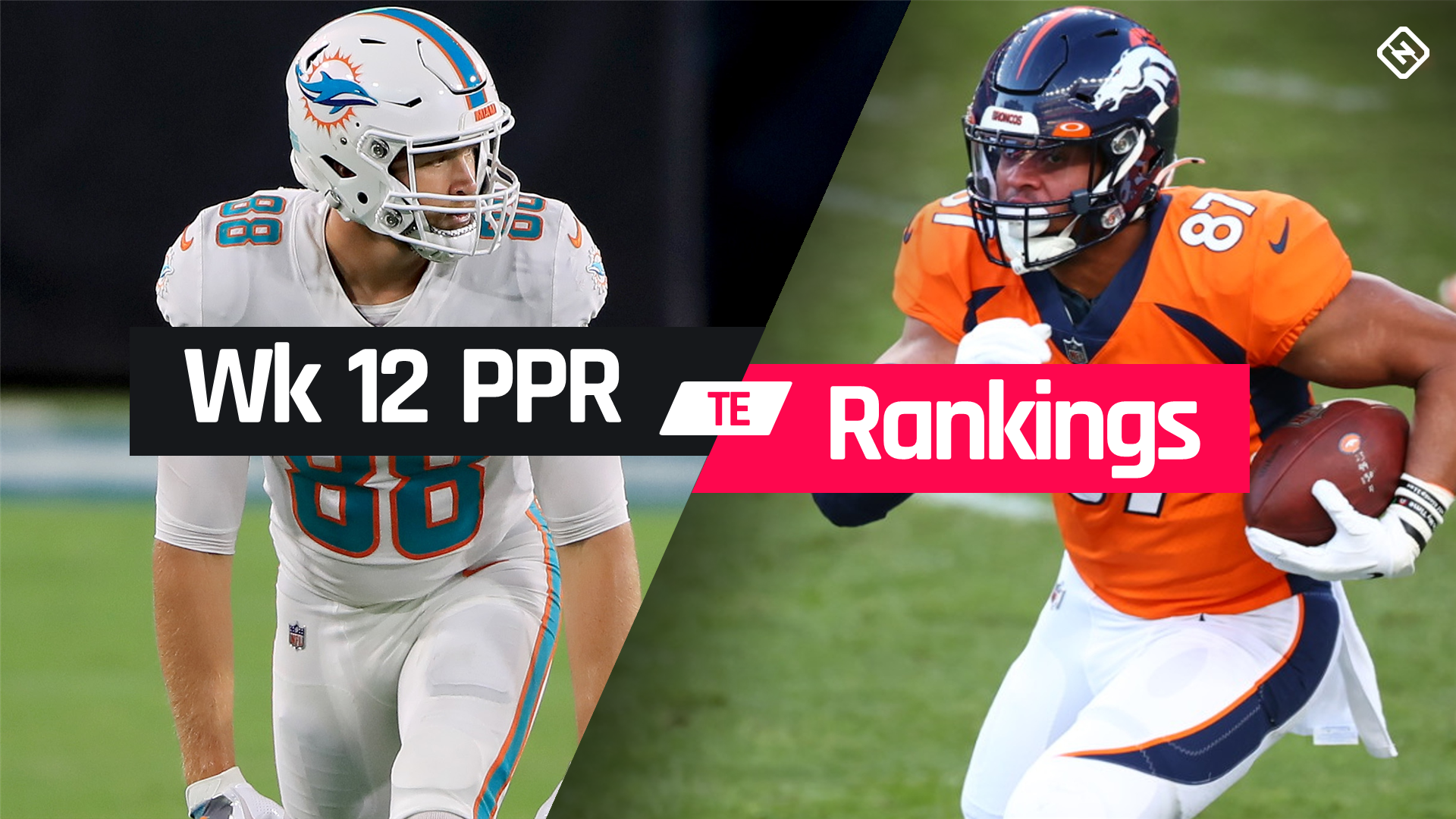 This could be a difficult week for tight ends — and not just because Travis Kelce is on bye. We’re here to help make sense of the potential sleepers, streamers, and stumblers in our Week 12 fantasy TE PPR rankings.

Zach Ertz joins Kelce on a bye, which doesn’t sound like a big loss, but it takes away one of the core mid-tier PPR TEs from the rankings. Noah Fant (vs. Chargers) returns, though, and has a highly favorable matchup ahead.

For those of you that have been riding high on Kelce, it’s time to figure out what to do this week. Our top streamer is Dan Arnold (vs. Falcons). Yes, Atlanta is statistically decent against TEs, but that’s mostly because it’s been getting ripped apart by No. 1 WRs. Arnold often functions like a WR for Jacksonville, and he should bounce back after last week’s no-show.

Evan Engram (vs. Eagles) gets a top-two TE matchup this week, and it might be hard to believe, but he’s been a TE1 multiple times this season. Austin Hooper (vs. Ravens) also has a great matchup and should have a solid floor in PPR leagues. Also, if Logan Thomas (vs. Seahawks) ever returns from his hamstring injury, he’s in a good spot to produce. Cole Kmet (@ Lions) is also in a decent spot against an inferior defense.

Unfortunately, many of the best matchups among streaming options this week go to Tommy Tremble (@ Dolphins), Jack Doyle and Mo Alie-Cox (vs. Buccaneers), Gerald Everett (@ Washington), and David Njoku (vs. Ravens). Do you really trust these guys to deliver? If you do, this is certainly among the best times to play them, but we’re not sold on their fantasy outlook of any except Doyle, who has a decent PPR floor. Even a guy like Engram has produced more fantasy-relevant weeks than any of the other guys mentioned in this section.

So, yes, we’ve preached about how much matchups matter, but they can be deceiving at the tight end spot. At wide receiver or running back, the top player is virtually guaranteed targets or touches, but that is far from the case at TE. Could any of the guys we warned against have a nice day? Sure, but they’re still huge risks.

Pat Freiermuth (@ Bengals) is facing a top-11 fantasy defense against the position, and so while we’re concerned this week, we understand if you want to play him and his high target floor. However, Tyler Conklin (@ 49ers) and C.J. Uzomah (vs. Steelers) have very low floors this week. Both are built on explosive plays, so we’re not banking on much from them, especially in PPR leagues. We are willing to trust Dalton Schultz (vs. Raiders) and Fant (@ Chargers) because of their matchups, though.

Note: We’ll be updating these TE PPR rankings throughout the week, so check back for the latest player movement and analysis.

Rankings based on full-point PPR scoring