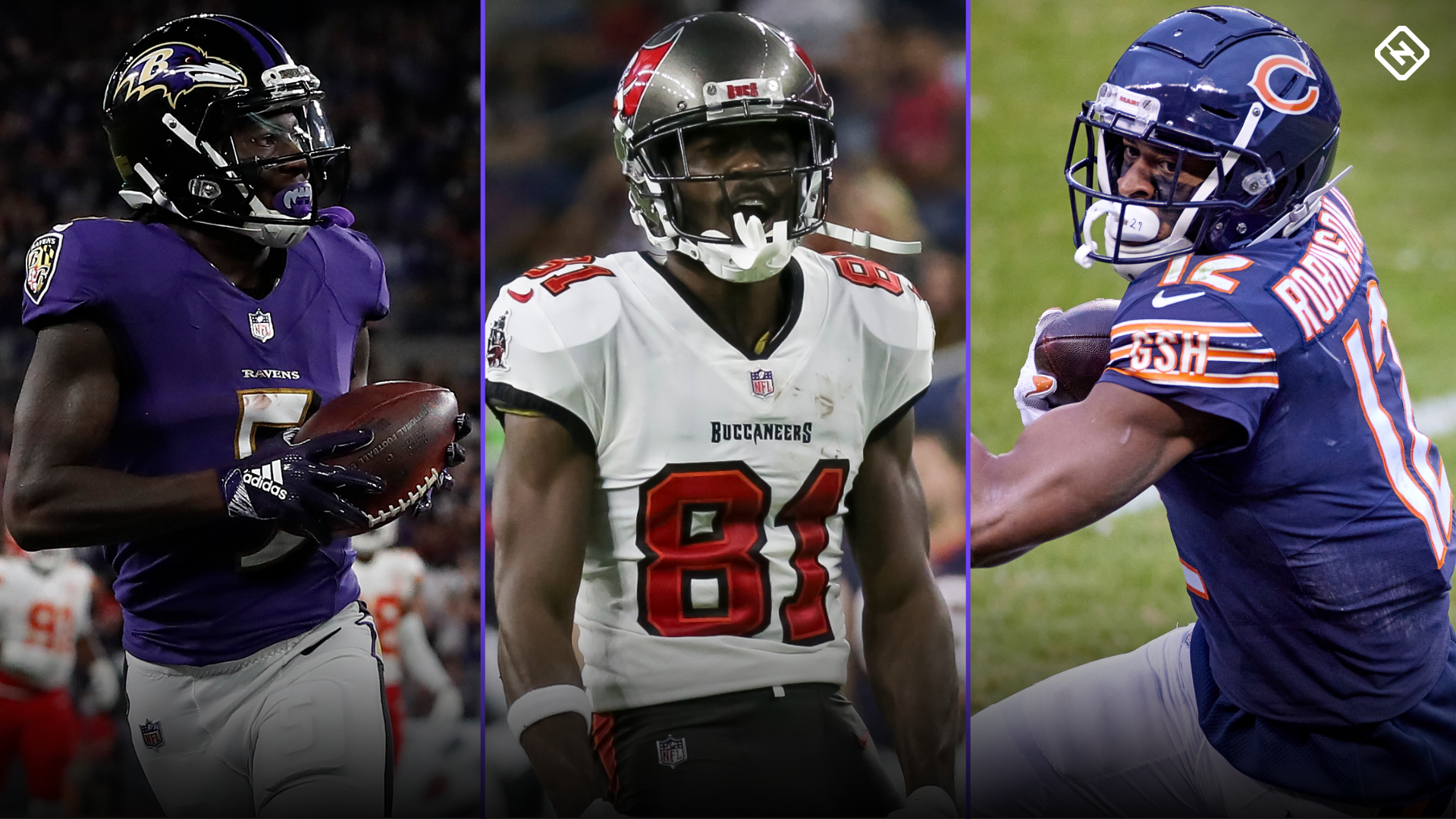 Marquise Brown, Antonio Brown, Allen Robinson, and Sterling Shepard headline a growing list of banged-up wideouts, and our Week 12 fantasy WR rankings will be affected if any or all can return. Each wide receiver figures to be no better than “questionable,” so we’ll update this as news comes along. For now, here’s the latest injury buzz.

Brown (thigh) didn’t get in more than one limited practice last week and was eventually ruled out ahead of a matchup with the Bears. Now, the Ravens look toward a game against Cleveland, who ranks as a bottom-10 defense against fantasy WRs. Brown’s health will need to be monitored moving forward, especially since he could go nuclear.

If he does play, (and Lamar Jackson is back), Brown ranks as our WR7 in PPR and WR8 in standard leagues. It’s worth noting he hasn’t been quite as productive since Rashod Bateman has entered the lineup, but that could correct itself here. Bateman will likely be ranked as a WR2/3 in Brown is inactive.

Brown (ankle) hasn’t played since Week 6, and it’s still unclear when he could potentially be back. The Bucs haven’t put him on IR, so you’d think it would be soon, but Josina Anderson reported last Thursday that Brown “still has a long way to go.” Who knows exactly what that means, so it’s best to simply keep your ears and eyes open for further updates.

If he does play in Week 12 in favorable matchup against the Colts, we rank him as the WR19 in standard and in PPR leagues. The Colts are one of the toughest teams to run against, so expect a pass-heavy game script for the Bucs.

Robinson (hamstring) didn’t practice or play last week and was an estimated “DNP” on Monday, so he’s not trending in the right direction for Thursday’s game against the Lions. This is another case where we’ll just have to monitor practice reports throughout the week.

The matchup with Detroit sounds nice, but Robinson’s lack of production suggests we can’t move him into even the WR3 range. After all, these two teams met in October and the Bears simply ran the football down Detroit’s throat. Chicago completed just 11 passes, and Robinson produced a three-catch, 63-yard stat line. Robinson simply serves as a low volume deep-threat, so we rank him as the WR40 in PPR and WR39 in standard leagues. Darnell Mooney is the more attractive pass-catching option, especially if Robinson is out.

Shepard (quad) practiced last Friday but was ruled out for Monday night’s game over the weekend. Since he was able to practice in any capacity, we can assume he’s close to returning Week 12, but we won’t know much until later in the week. If he plays against the Eagles, he may have a tough time since Philadelphia is a top-five unit against fantasy WRs.

All that said, he has commanded flurries of targets when he’s been in the lineup, so we rank him as the WR28 in PPR and WR31 in standard leagues. His ceiling is limited, but his floor appears to be safe based on what we’ve seen in his limited action this season.