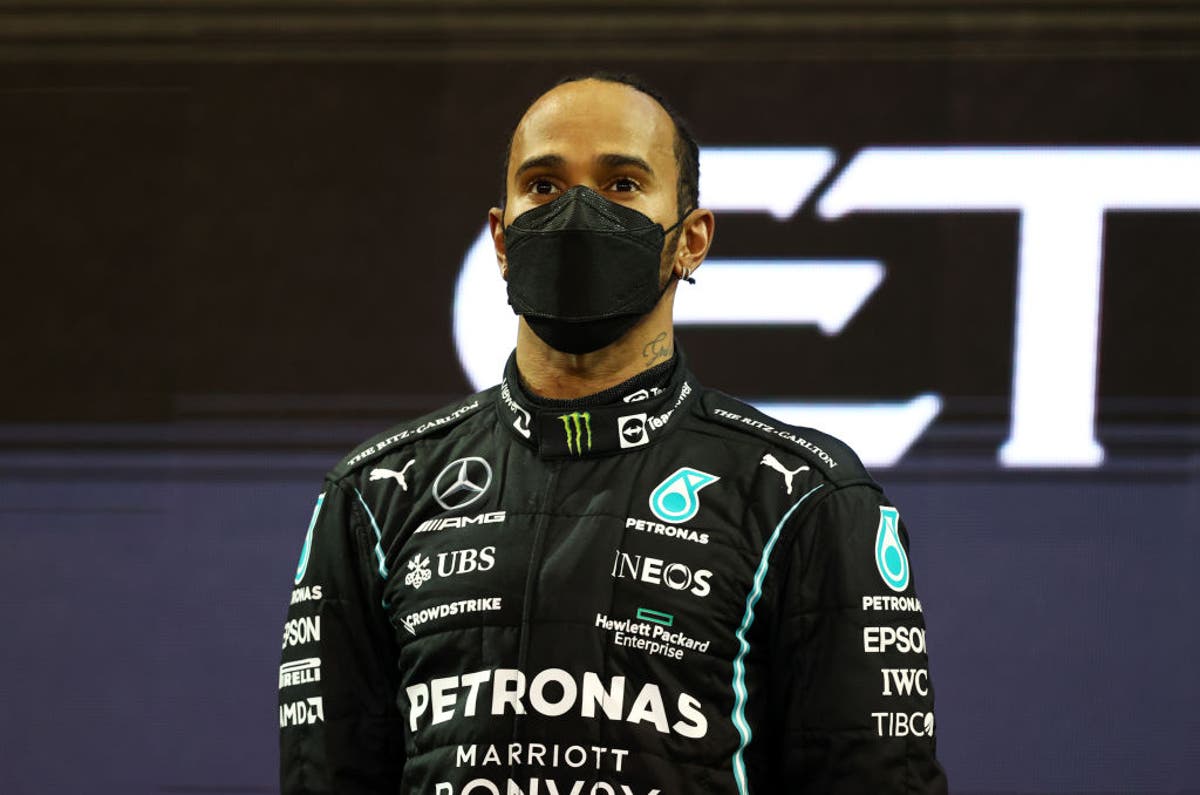 Lewis Hamilton’s Formula One future remains in the balance, if only because there has been no clarification from him in public over his intentions ahead of the 2022 campaign. The British racer is still contracted with Mercedes through to 2023, but speculation has grown that he could walk away ever since the dramatic events at the end of last term which saw Max Verstappen clinch the championship on the final lap of the season.

Four-time world champion Alain Prostrated the chances of Hamilton coming back to F1 at just “50-50”, amid suggestions that the outcome of an inquiry into the season-ending race in Abu Dhabi could prove key to his final call – which might include a sabbatical year. Michael Masi came under serious pressure as race director for his decisions during that Grand Prix in particular, while Mercedes eventually dropped their appeal against Red Bull’s driver winning the title in such fashion.

Elsewhere, a McLaren boss has suggested teams will be looking to perform “trickery” within the new rules to maximise their chances of success once the new-look cars hit the tracks later this year. Follow all the latest F1 news below:

“There is the seven-time world champion who leads a rather media-loving life,” Marko told ServusTV.

Hamilton was pictured at Windsor Castle just days after losing in controversial circumstances at the Abu Dhabi Grand Prix to receive his knighthood. But since then he hasn’t made a statement or been on social media.

Formula 1 has been warned to not permit “preferential” communications between teams and the FIA.

A controversial ending to the 2021 season, which saw Max Verstappen edge out Lewis Hamilton in Abu Dhabi, has raised concerns surrounding the Briton’s future, with the legendary Alain Prost even claiming the Mercedes star “could be finished”. A bitter taste was left for Mercedes with Toto Wolff irate and criticism levelled at race director Michael Masi’s decision to only allow some lapped cars to overtake the safety car before the final lap.

And with Red Bull Team Principal Christian Horner appearing to pressurise Masi to clear the way for his Belgian-Dutch superstar, Lord Peter Hain, a Labour peer and Vice-Chairman of the All Party Parliamentary Group on Formula 1, has called for boundaries to be set.

He told the Express: “There has to be integrity all around. There can’t be preferential communications with certain teams rather than others. I think that’s the important thing

“There must be no repeat of this.”

There has even been calls for the line of communication between the FIA and teams to be cut off after the drama involving Horner and Wolff in Abu Dhabi.

Ross Brawn, Formula 1’s managing director of motorsports, is keen to eliminate the potential for teams to exert pressure on the FIA to implement certain rules.

“We will stop this contact next year,” Brawn told Auto Motor und Sport.

“It’s unacceptable that team bosses put Michael under such pressure during the race. It’s like the coaches negotiating with the referee in football. Toto can’t demand there shouldn’t be a Safety Car and Christian can’t demand the cars have to un-lap. That’s at the discretion of the race director.”

Audi are out to “surprise” with their plans in motorsport but have insisted they remain focussed on the Dakar Rally and 24 Hours of Le Mans as rumours swirl over a possible entry on to the Formula 1 grid.

The German manufacturer has been widely tipped to join F1 at the change of engine regulations before the 2026 season, either as a constructor outright or an engine supplier.

The Bavaria-based subsidiary of the Volkswagen group has been connected with a buyout of Mercedes, and Sport1 has said that Audi remain interested in a stake.

“We want to surprise with our motorsport projects,” said Hoffmann, quoted by Sport1.

There is only a “50-50” chance that Lewis Hamilton returns to Formula One for the 2022 season, according to four-time world champion Alain Prost.

Hamilton is said to be “disillusioned” with the sport after he lost out on a record-breaking eighth world championship to Max Verstappen on the final lap of the season in a hugely controversial season-decider at the Abu Dhabi Grand Prix last month.

There have been reports that Hamilton and Mercedes have yet to receive assurances from the FIA that there will be changes to how race rules are enforced from next season, following team boss Toto Wolff’s criticism of race director Michael Masi at the Yas Marina Circuit.

In withdrawing their appeal of the race result, Mercedes confirmed they would “actively work” with the FIA to “build a better Formula One” but there have been reports that Hamilton is now considering taking a sabbatical, with just over two months ahead of the start of the 2022 campaign.

Formula 1 engineers will perform some “trickery” to capitalise on the sport’s new regulations, according to McLaren technical director James Key.

After a thrilling 2021 season which saw Lewis Hamilton and Max Verstappen dominate throughout, F1 has drafted in new regulations to shake up the sport in pursuit of greater variance.

The sport will see a change to the aerodynamic composition of the cars. While simplified front and rear wings should result in minimal turbulent air created as well as enabling cars to follow through technical sections across all the circuits on the schedule.

And after much discussion and debate surrounding rear wings and more stringent FIA tests, Key has shed light on the impact they will have next season.

“I think the sensitivities around elastics certainly have changed,” Key said. “It’s well understood that from the regulations that have been discussed of late with how to better manage flexible…I shouldn’t say flexible components but components that can flex and make a difference is probably more accurate.

“Some of the tests are more stringent I think so the rear wing tests, for example, will be a little bit tougher. Some of the things that have happened earlier in the year have carried through into ’22 and I think there is a lot of attention being paid to that.

“Front wings similarly, and the front wing in ’22 is a massive thing but it has still got a stringent set of guidelines on stiffnesses. So I think there will always be a few tricks to play but I don’t think there’s going to be something easy to exploit there.”

Key maintains “a certain level of stiffness” to the car can be exploited through the big ground-effect floor and the return of big wings.

He added: “There are various new tools to play with in 2022. It will probably become some sort of issue I’m sure, but it’s not something that the teams or the FIA are ignoring.

“It’s a fairly clear area where we need to be careful to regulate correctly.”

The Australian star says travelling around the world and being away from family and friends can take their toll on F1 drivers. He adds he has been “lonely” during a season before and people outside of the sport should be mindful that they are “real people”.

“I think with anyone in the spotlight or anyone on TV, sometimes to the outside they are not seen as, like, real people,” he said, per Autosport.com.

“It’s like, if you’re an actor…oh, that’s Brad Pitt. He’s superman. He could do anything or whatever. Like he doesn’t get sad or emotional or whatever. But as you know, you guys would feel it, we travel so much that you do miss loved ones. So having that kind of times 10 is tricky.”

Last season’s final race was a real showstopper for entertainment – but the end result and how it came about left Mercedes, Lewis Hamilton and many fans of the sport incredibly unhappy. The decision of Michael Masi, the race director, to unlap only the cars between Max Verstappen and Hamilton, who was leading at the time, was seen as a very obvious move to inject last-lap drama into the championship fight.

BBC Sport claim sources tell them a deal was struck between Mercedes and F1 authorities that the team would “drop their appeal against the results of the race after agreeing a quid pro quo with the FIA”, namely that Masi and “FIA head of single-seater technical matters Nikolas Tombazis would no longer be in their positions for the 2022 season.”

Mercedes deny that such a deal was ever in place, according to the same report, and say they withdrew their appeal “after receiving assurances only that the issue would be treated seriously and appropriate action would be taken”.

Toto Wolff was furious with Masi on the day and has since stated that the team would hold the FIA “to account”.

Pierre Gasly knows there are plenty of uncertainties over how teams will interpret the new incoming rules in F1 and it could see teams fire up the leaderboard early on – or slide the other way. The AlphaTauri driver isn’t wasting too much time worrying about whether his team will get it right or wrong, but pointed out that the nature of F1 means it’s more exciting to be involved nearer the front – and often, people won’t even notice a “moment of genius” if it doesn’t happen among the front-runners.

“There’s just many unknowns that I don’t have the answer [to]. I hope we are as good because when you start to fight for P12, P13, these sorts of positions, [it] is not as exciting and obviously, people don’t even really see your performances.

“You can do an amazing race but as I say, whether Mick [Schumacher] delivers the performance of his life in a Haas because the pace is so far from the others, even if he has a moment of genius, no one will ever notice, except he will know that he’s done an incredible job.

“It was probably for whatever reason in the best zone he’s ever been but if you are at the back, no one cares, and no one sees it.

“It’s difficult to enjoy, even to get the results and the reward. As you learn in motorsport, if you do a good job, you get rewarded with a trophy, champagne, but F1 is a different story and that’s not always easy to accept.”

Today’s top stories so far in Formula One centre around Audi’s rumoured involvement in the sport in future and the two Red Bull drivers in the spotlight.

Antonio Giovinazzi is remaining hopeful that he’ll make a return to Formula One, after being cut from Alfa Romeo at the end of last season.

Despite three years with the team they opted against a renewal and he will be Ferrari’s reserve driver this year, splitting the role with Mick Schumacher.

But that’s far from the extent of his ambitions and he told Formula1.com that he’s aiming for a comeback just as others have done.

“I’m leaving for now. I posted my first picture in a F1 car when I was three years old on my social media. The last picture [in F1] is not this year. We saw already many drivers have stopped for one year and come back, like Esteban Ocon and Alex Albon,” he said.

“One of the things I will do next is keep one foot in the F1 paddock. I’m still part of the Ferrari family. We’re trying to have the same things next year; it’s important to stay here and see if there is a chance in 2023. We’re looking for this, and I’d be happy to continue with them.”