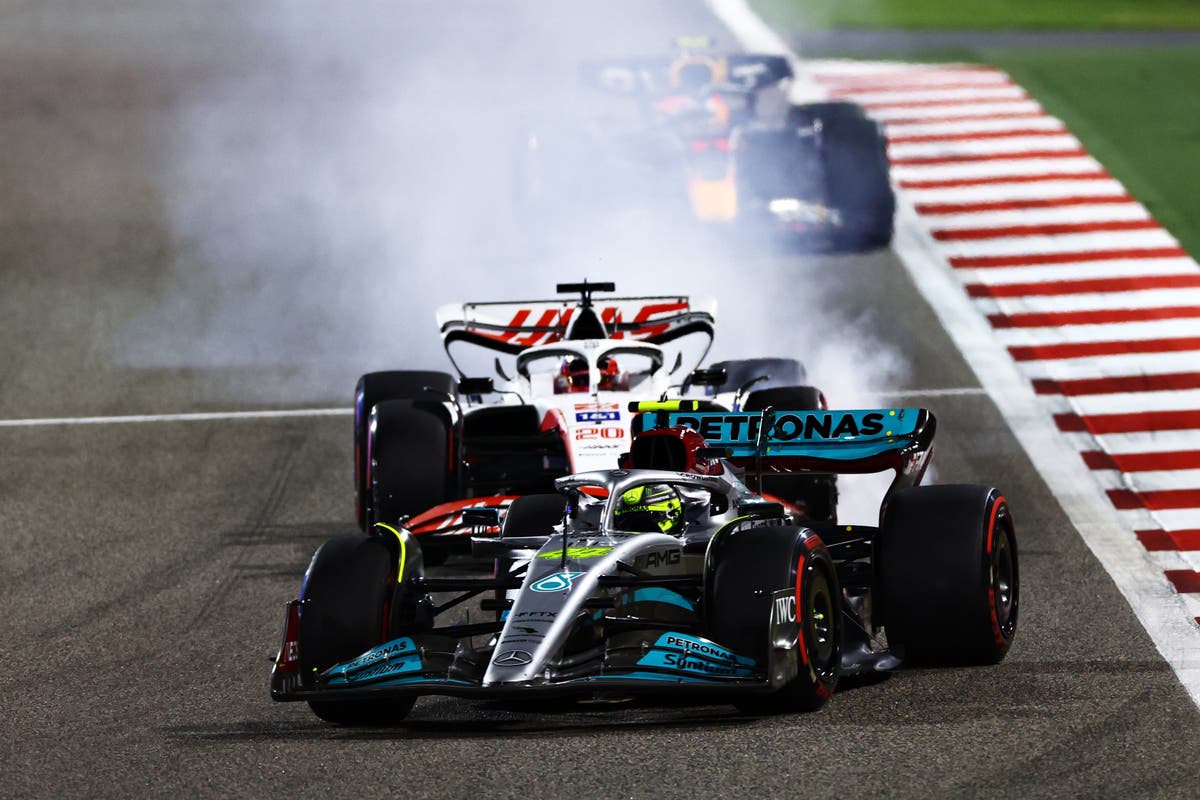 F1 races 2022: Take a virtual lap ahead of the Bahrain Grand Prix

As the dust settles after Charles Leclerc won a thrilling Bahrain Grand Prix, attention turns to the Saudi Arabian Grand Prix this weekend with many teams frantically looking for adjustments.

World champion Max Verstappen will be eager for Red Bull to correct the reliability issues that plagued himself and Sergio Perez in Bahrain, leading to the pair suffering DNF.

“I did a bit of a joke on the radio on the last lap, saying there was something strange with the engine,” Leclerc told Sky Sports. “The engineers I’m pretty sure didn’t like that, but it was fun.” While teammate Carlos Sainz finished second to ignite a compelling title race with Mercedes also wary of their car’s ability to compete this year despite the third and fourth finishes from Lewis Hamilton and George Russell, with Toto Wolff conceding they may “take a chainsaw” to the W13 in pursuit of less drag.

Elsewhere Haas have been revelling following an impressive day as returning F1 driver Kevin Magnussen collected a fifth-placed finish, the Alfa Romeo of Valtteri Bottas came in sixth and his teammate Guanyu Zhou finished 10th to collect a first world championship point on his F1 debut.

Follow all the latest news and reaction from the Bahrain Grand Prix below, as the F1 world looks ahead to the next race in Saudi Arabia.

Toto Wolff has heaped praise on George Russell for his driving style while taking a shot at Max Verstappen.

The reigning Formula 1 world champion is known for his aggressive style and the Mercedes team boss has labelled his approach as “win it or bin it”.

While Wolff also praised Russell for marrying intelligence and skill, with the young driver delivering fourth in his debut for the Silver Arrows in Bahrain last weekend.

“I think Max’s approach – and this is George’s phrase since he was in go-karting – is ‘win it or bin it,’” Wolff told GQ.

“George approaches it more from an intellectual standpoint while having all the skills.

New Aston Martin AMR22 “a disaster” according to Ralf Schumacher

Ralf Schumacher says the Aston Martin AMR22 is “a disaster” and feels the team’s Toyota-like “bulldozer approach” to reaching the frontof the grid will not work.

Schumacher drove for Toyota when they owned a Formula 1 team in the 2000s, and felt it was a case of a big named brand spending a lot of money in the hoping to build a front-running team and which ultimately failed.

Aston Martin’s boss, Lawrence Stroll, is currently in the process of funding a new factory and wind tunnel for the Silverstone team having already recruited more than 200 new staff with the aim of getting the team back up Formula 1’s leaderboard and Schumacher sees parallels in this approach to his time at Toyota.

“The car is, so we hear, a disaster,” said Schumacher on AvD Motor & Sport Magazin on German TV, “It has to be able to do everything you don’t need. And on top of that, apparently the team owner is now also sitting in the meetings and voicing how things should be done. If that’s the case, it gets really, really complicated.

“The team have lost the thread. They wanted to achieve too much too quickly and that simply doesn’t work in Formula 1. You can’t just take a lot of people and a lot of money, put them in a pot, stir it briefly and then something good comes out.

“The team wanted to take a bulldozer approach and that didn’t work at Toyota.”

‘No solution yet to ‘porpoising’ for Mercedes’ says Russell

Mercedes manage to finish third and fourth in the 2022 Formula 1 opener in Bahrain but they struggled throughout the race with ‘porpoising’. A phenomenon seen this year when the car violently bounces on its suspension at high speed.

George Russell, who finished fourth behind Charles Leclerc, Carlos Sainz and Lewis Hamilton, suggested Mercedes could be stuck with the problem for the rest of the campaign.

“This bouncing we are experiencing down the straight is slowing us down because we are smashing into the ground, rather than going forward,” he said.

“It is promising to see that other cars have had the same issue and they managed to solve it which means there is a solution there, but we are struggling to find it.

“It would have been brilliant if we solved it in testing where we had so much running. But we truly just don’t know how long it will take, if it is next weekend or after the summer break.

“We hope it will be as soon as possible, but there is no reason why it may not continue the whole year.”

Ferrari on top, Kevin Magnussen back with a bang and Red Bull yet to get on the board – here are how the standings look after the opening race of 2022.

Valtteri Bottas led Alfa Romeo to a double-points finish in the Bahrain Grand Prix after finishing sixth in the opening race of the 2022 season with teammate Zhao Guanyu coming in P10.

Bottas says he was even more pleased with his performance given a “disaster” of a start that saw him fall from P6 to 14th on the opening lap.

Copious amounts of wheelspin dropped the ex-Mercedes driver well out of the top 10 on the first lap but having pitted three times, Bottas made it up to eighth on the final Safety Car restart before picking up two extra places when both Red Bulls retired.

“The start was definitely the weak point of the race and a bit of a disaster, just massive wheelspin off the line,” said Bottas. “I pretty much cooked the rear tyres and then I was like a sitting duck after the first lap.

“Something to learn, something to look into, but when things stabilised it was a good recovery, good strategy, and a smooth race. I think we had decent pace, which is encouraging.

“And I’m very happy for Zhou Guanyu in his first race; he got points, which is pretty good. Double points to start the season – not bad.”

Formula 1 world champion Max Verstappen was left frustrated during the Bahrain Grand Prix on Sunday after his second pit stop as the planned undercut of race leader Charles Leclerc failed to work for a second time. He suggested over the team radio that he had not been allowed to push on his tyres in a bid to get ahead of the Ferrari.

On both occasions, Verstappen found himself still behind Leclerc after the Ferrari driver emulated the move and also took on fresh tyres. After the second time this happened an angered Verstappen said: “This is two times I’ve taken it easy on the out-lap and I could have been in the lead. I’m never doing it again!”

But, Team Principlal Christian Horner explained the situation when he said: “It’s always a balance [because] what you take out of the tyre early in the stint, you pay for it later in the stint.

“Possibly we underestimated the undercut but Ferrari had the pace that had we got that track position they would have made the overtake. We just didn’t quite have their pace.

“But encouraging we’re able to take the fight to them at least and it’s a basis from which to build but we need to quickly address this issue that caused the DNF.”

‘No points but positives to take’ says Sergio Perez

Red Bull’s Sergio Perez says there are a lot of positives to take from the Bahrain Grand Prix despite both cars having to retire in the closing laps of the race.

Both Perez and teammate Max Verstappen lost power toward the end of the race with a suspected problem related to their fuel systems.

Until then both cars were fighting for the podium places against eventual winner Charles Leclerc and his Ferrari teammate Carlos Sainz. Perez says they were in the fight all the way through but that the results is ‘hard to take’.

Mick Schumacher: ‘It’s nice for me to remind people of what my dad did – but I can create my own legacy too’

In a sense, Mick Schumacher’s entire life had been building up to one moment. From being first sat in a go-kart at just two-and-a-half years old, inheriting the obsession for racing that runs so deep in his blood, he was being trained, perhaps even engineered, to become a Formula One driver. He had started out competing under his mother’s maiden name to shield him from the media, then he ascended through the junior ranks with meticulous attention to detail, interrogating engineers for clues to the cars and seeking out advice from friends of his father. Before he fulfilled his dream, he wanted to try and eliminate all the elements of surprise that might throw him off course. In his mind, he simulated how his first race might unfold hundreds of times.

What all that preparation can never quite replicate, though, is the tension that grips the muscles and nerve-endings once you’re sat on the grid alone and waiting, or the anxious excitement that clouds all those clearly laid plans as the lights go out. And so, at the fourth turn on his first full racing lap, with the dirt and dust in humid Bahrain sticking to the track, Schumacher trod on the throttle a little too certainly. Like a trigger had been fired, the car suddenly lurched out of his control, span up against the kerb and then into the gravel.

“You’re just trying to find the limit and I think it was just a case of underestimating,” the 22-year-old says now, sitting in Haas’ team garage during pre-season testing. “And in that case, it can even be positive because it keeps you hungry and probably also humble. A certain amount of pressure is always part of the game. It all belongs to growing and I’ve grown so much since. I’ve become so comfortable in the car. [The pressure] kind of disappears and the feeling of being a rookie is not there anymore. I’ve been in that place last year but I feel a lot more part of the actual business here.”

Red Bull Formula One boss Christian Horner has praised Mercedes rival Toto Wolff for speaking out about the mental health issues that have plagued him for more than a decade despite unprecedented success.

Wolff told the Sunday Times that he had been seeing a psychiatrist since 2004 and had more than 500 hours of therapy.

“I have suffered mentally, I still do. Getting help is a way of overcoming my problems, and it has helped me to access untapped potential,” said the man who has steered Mercedes to a record eight successive constructors’ titles.

Horner told reporters at the season-opening Bahrain Grand Prix that it was an important topic.

Mercedes ‘punching above our weight’ with finish at Bahrain GP, admits Toto Wolff

Toto Wolff has described Mercedes’ opening race result in Bahrain as “fantastic” and said that the team are “punching above their weight” at the start of the 2022 F1 season.

Lewis Hamilton capitalised on the retirement of both Red Bull drivers to finish on the bottom step of the podium, closely followed by new teammate George Russell, who took fourth in his first race as a permanent member of the German team.

Despite a clear lack of speed compared to the fastest cars on the grid, it represented a good start for Mercedes, who have struggled to adjust after aerodynamic regulations were overhauled during the offseason.