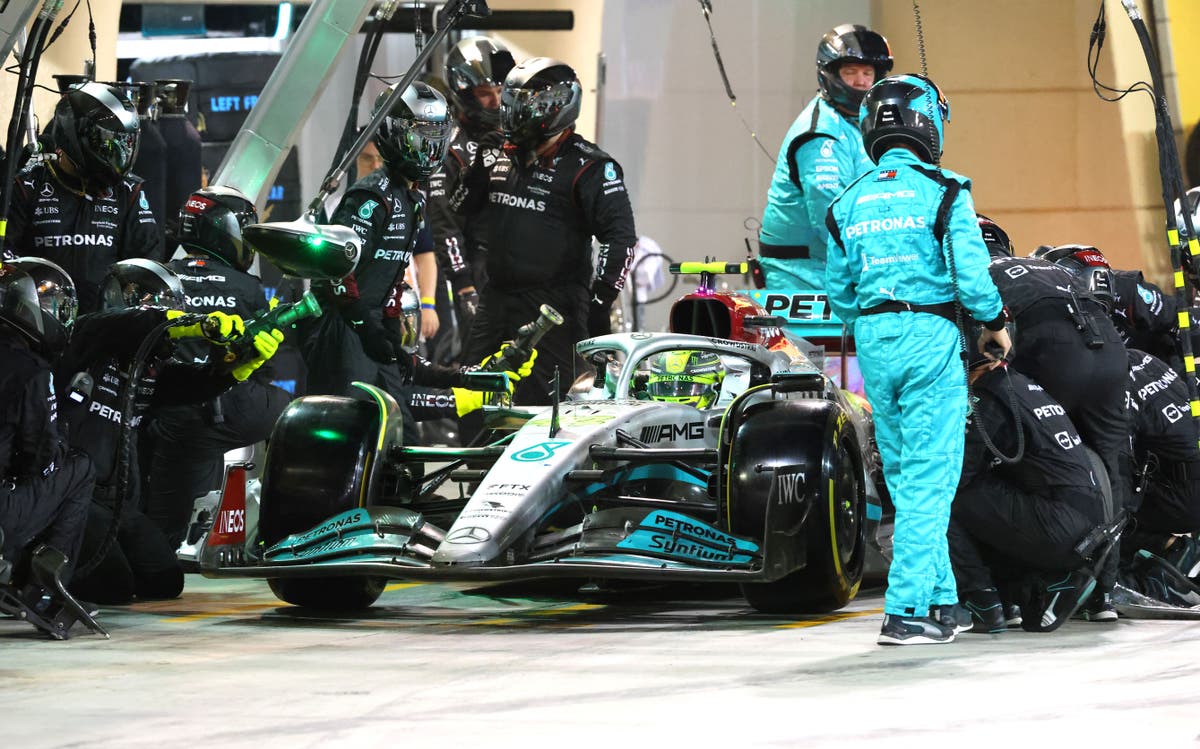 F1 races 2022: Take a virtual lap ahead of the Bahrain Grand Prix

Follow all the latest news from the world of Formula 1 as the start of the Saudi Arabian Grand Prix approaches.

Following their delighted at finishing third and fourth in last weekend’s season opener in Bahrain, Mercedes are preparing to make changes to their car in an attempt to close the gap in pace to Ferrari and Red Bull. Team principal Toto Wolff has said his engineers will “take a chainsaw” to the rear wings on the cars of Lewis Hamilton and George Russell as they aim to be more competitive for the race victory in Jeddah on Sunday.

Red Bull meanwhile will are scratching their heads after suffering a double retirement in Bahrain. Max Verstappen was left unimpressed by the mysterious issue which denied him a podium finish, and later team boss Christian Horner suggested what the issue might be, saying: “It looks suspiciously like the failures are related to each other and it may be an issue with the fuel system.” Follow all the latest news and reaction from the Bahrain Grand Prix below, as the F1 world looks ahead to the next race in Saudi Arabia.

George Russell says he regrets his argument with Valtteri Bottas after the pair’s high-speed crash at the Emilia Romagna Grand Prix at Imola last season, admitting that the exchange made him look like “a bit of a d***”.

Russell, who was driving for Williams, collided with Bottas after trying to pass the Mercedes on the outside of the long straight in wet conditions at Imola. Russell accused Bottas of pushing him onto the grass verge before losing control of his car and crashing into the Finn, sending both drivers into the wall.

The pair were unharmed after the crash, which caused a 23-minute red flag stoppage, and Russell then confronted Bottas while he remained in his car, slapping his helmet before Bottas replied with a middle finger.

Over this team radio, Russell also fumed: “What the f*** was he doing? Honestly. Is he a f***ing p***k or what?”. The exchange was also captured in the latest season of Netflix’s Drive to Survive, where Russell was also shown calling Bottas a “c***”.

Mika Hakkinen has predicted that Lewis Hamilton may become “irritated” by a lack of support from new Mercedes teammate George Russell.

Russell joined the German team from Williams in the off-season to partner his fellow Briton Hamilton on the 2022 F1 grid and Hakkinen believes the partnership may not be as stable as the close teamwork utilised by Hamilton and Valtteri Bottas, now of Alfa Romeo, during five seasons alongside one another that brought Mercedes significant sustained success.

Describing his fellow Finn’s teamwork as “perfect”, Hakkinen thinks a “sensitive” Hamilton could suffer due to the change from Bottas to Russell.

“I believe and I know from my experience that Lewis is relatively sensitive,” Hakkinen, the 1998 and 1999 world champion, told the Unibet YouTube channel.

“He is a sensitive person. When Valtteri was Lewis’ teammate, the teamwork was perfect. Now, the support he’s going to get from Russell… The teamwork could be lost. That’s where Lewis can become irritated.”

Mercedes have said that there are “easy gains” to be made as the German team target an improved performance at the Saudi Arabian Grand Prix.

Despite winning the last eight constructors’ championships, the outfit have struggled with overhauled regulations ahead of the season, with “porpoising” and a lack of race pace causing particular difficulties.

Lewis Hamilton and George Russell overcame the issues to finish third and fourth at the season-opening Bahrain Grand Prix after both Red Bull drivers were forced to retire but Mercedes will now look to close the gap in performance between their new W13 car and their potential title rivals Red Bull and Ferrari.

While recognising that there are significant problems, trackside engineering director Andrew Shovlin believes that quick improvements can be made to avoid an extended slow start to the season.

“We just did a de-brief with the drivers and there is a lot of everything [wrong],” Shovlin told the F1 Nation podcast, “There’s bouncing, the balance is poor, there is a lack of low-speed grip, we’re struggling on traction, the drivability could be better, the tyre warm-up is not good enough, the car is a bit on the heavy side.

“There’s a lot to improve which gives us some encouragement. I think we’ll get some easy gains, there’s some low-hanging fruit and what we’re hoping is that we can get those in the next race or two.”

Lewis Hamilton opens up on his purpose beyond Formula 1 career

Lewis Hamilton has expressed his belief that he must continue to use his “platform” to “apply pressure in an uncomfortable way” and create positive change in Formula 1.

The seven-time world champion has spoken prominently on several social issues, including the need for greater diversity within F1 and – revealing that his perspective has changed as he has gotten older – Hamilton has outlined a need to continue to try and “spark change” from within the sport.

Hamilton told Sky Sports: “My role here, I think, is to continue to hold those conversations, sit with Stefano [Domenicali, F1’s CEO] and say: ‘What are you doing and how can we work together?’

Formula 1 will meet with Netflix to discuss the future of popular documentary Drive to Survive after accusations that the show “faked” drama.

The fourth series premiered ahead of the 2022 F1 season and has again returned apparently strong viewership among subscribers to the streaming platform giants.

Credited with causing an expansion of the sport’s audience, particularly in the US, Drive to Survive has also been criticised for manipulating footage to present certain narratives that may not be true to what happened.

Red Bull’s Max Verstappen declined to take part in the latest series and said that the show had “faked a few rivalries which don’t really exist”.

Stefano Domenicali, the CEO of F1, insists that the show is beneficial for the sport, but also believes “a dialogue is needed” to ensure that both Netflix and the drivers are happy.

Max Verstappen has revealed the extent of Red Bull’s self-inflicted problems during the Bahrain Grand Prix.

The Dutchman’s defence of his maiden F1 world title got off to a disastrous start, with both Verstappen and teammate Sergio Perez failing to finish at the Bahrain International Circuit.

The 24-year-old had appeared set to take second behind Ferrari’s Charles Leclerc, but an issue with his car’s fuelling system meant he could not continue and took no points after a retirement.

Also, after his second pit-stop, the Red Bull mechanics dropped Verstappen’s car too quickly, bending a track rod connecting to one of his wheels and making the car “really difficult to drive”.

Stefano Domenicali has revealed that Formula 1 has “more than four or five requests” from new teams hoping to enter the sport but played down the prospect in the immediate future.

Michael Andretti, the American former racing driver and team owner, has made public his interest in bringing a new team to F1, however, Domenicali insisted the current level of competition on the grid is enticing enough and questioned whether there was space for more than 10 teams.

“There’s not only Michael Andretti,” Domenicali told Sky Sports. “He is maybe the most vocal one, but we have more than four or five requests to consider an extra team to be a part of Formula 1.

“I have to be very honest, today F1 with 10 teams, with the competition on the track, is very, very solid. There are complexities that need to be considered if other teams can be added. Therefore I don’t think it’s the most important element to grow F1, to be honest.”

Max Verstappen has explained the difficulty he experienced in Bahrain after his second pit stop saw his Red Bull mechanics drop the RB18 car to the ground too quickly, causing a track rod to bend.

“The steering issue was not easy to drive [around] because of not having a feeling of what the car was doing because it was not natural,” explained Verstappen.

“You can lose power steering and it is just heavy but this was almost stuck in places so it was really difficult to drive.

“Of course, the big problem was what happened afterwards where it looked like there was no fuel coming to the engine and basically everything just turned off so I rolled back into the pit lane.”

Formula 1 boss Stefano Domenicali has confirmed that the sports’ calendar could be expanded to as many 30 races a season.

F1 will hold a record 23 Grands Prix in 2022, but with surging popularity, particularly in previously untapped, large markets, Domenicali believes there is appetite for expansion.

Las Vegas has been widely tipped as a potential future host city and the F1 CEO has confirmed that a visit to Nevada could well be on the cards.

With significant interest in other territories, including on the African continent and in China, Domenicali believes that the sport may need to extend itself beyond the 24 races a season permitted by the Concorde Agreement.

“Not only Las Vegas, there are other cities that are interested in Formula 1. On top of America, on top of China, I think there is a potential also to be in Africa soon. There is a lot of interest there. For sure that’s another area that so far is missing in the geography of our calendar.”

George Russell has warned that Mercedes’ issues with their new car could last the entire F1 season.

The German team were off the pace for much of preseason testing and their problems continued at the Bahrain Grand Prix despite a solid race finish.

Russell, making his Mercedes debut proper after joining the team from Williams, secured fourth place, one spot back from new teammate Lewis Hamilton.

Yet the new W13 car again appeared to lack the straight-line speed of the team’s rivals Red Bull and Ferrari, and struggled with ‘porpoising’.

Asked when he felt the issues might be resolved, Russell said: “We hope it will be as soon as possible. But there is no reason why it may not continue the whole year.”