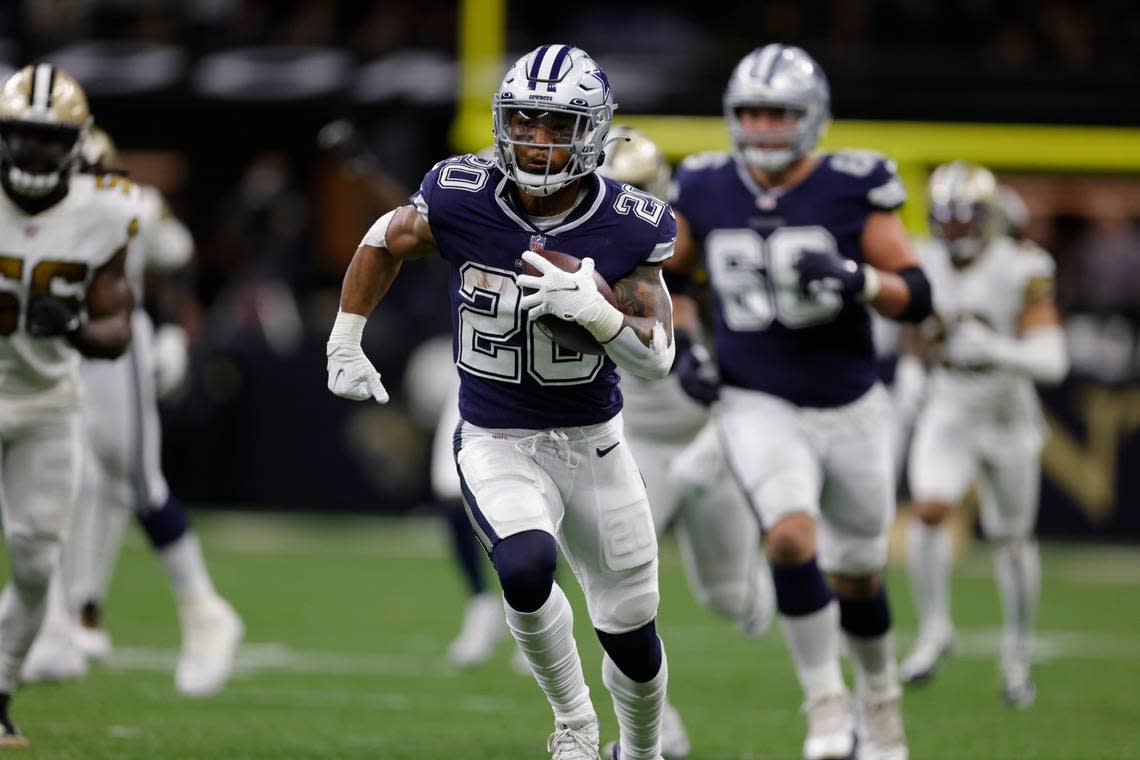 It was equally painful, for different reasons, to watch two players against the New Orleans Saints who should be among the best for the Dallas Cowboys.

Running back Ezekiel Elliott needs to be on the bench because he’s hurt.

Linebacker Leighton Vander Esch needs to be on the bench because he can’t play.

They are starting because the Cowboys feel like they don’t have any choice.

On Thursday night in New Orleans, the Cowboys dealt with both and beat up a beat up a depleted Saints team, 27-17.

The Saints were wrecked with injury coming into the game, and Saints quarterback Taysom Hill is a starter in name only; he’s a running back playing quarterback on TV.

Against the Cowboys, he was playing with a splint on his throwing hand, which didn’t help.

The Cowboys took full advantage of the matchup, so neither Elliott nor Vander Esch had a negative effect on the game’s outcome.

But this is a problem.

The Cowboys briefly entertained the thought of giving Zeke a game off, which they need to do. He’s clearly favoring his right leg, and he is dealing with an injury that can’t heal if he’s playing.

But he plays because his backup simply is not good enough in pass protection.

Tony Pollard is talented enough to be a starting running back, but if the Cowboys don’t trust him to pick up linebackers or defensive ends to protect Dak Prescott, then he must remain in his current role.

Against the Saints, Pollard ran the ball seven times for 71 yards, but included in that was a 58-yard touchdown toward the end of the third quarter that broke the Saints.

It was the type of run that Zeke used to be able to produce in his first year in the NFL. He certainly can’t do that now with a bad leg.

According to the FOX telecast, Pollard’s long run was the first recorded by a Cowboys running back since 2017. That’s a string of 71 games. And the guy who last accomplished the feat was not named Zeke. Those honors to go Alfred Morris.

Against the Saints, Zeke rushed 13 times for 45 yards. His longest was a 10-yarder in the fourth quarter. The math says he has rushed for 143 yards on 45 carries in the last four games.

The development is a bummer of a break for Zeke who was enjoying a nice season until he sustained this injury.

You can’t blame him for this production, but applaud his effort to play through it all. He knows he’s needed as a pass blocker, and he’s been game to do it.

He needs a break, yet the Cowboys can’t afford to give him one yet.

Vander Esch, however, looks nothing like the player who as a rookie showed so much promise that he was projected to be a Pro Bowl linebacker multiple times.

But against the Saints, he showed why the Cowboys did not pick up the option on fifth-year from his original rookie contract.

He looked lost, and he continued the trend of being on the field and not making plays. He’s not at the point of attack, and he is late to plays.

LVE is coming off consecutive seasons where he sustained major injuries, and he looks like a player who fears having to deal with another one. Either that, or he’s just no longer the same guy as a result of those injuries and surgeries.

LVE has started every game but one this season, in Week 1, and he has one sack and four tackles for losses.

Considering the type of injuries he’s sustained it may be too much to ask a player to return to the previous level of production. An injured neck in football is no joke.

The Cowboys have already cut one of their starting linebackers, Jaylon Smith, this season and they are not going to dump another one this late. But the more LVE plays, the more it looks like his future with the Cowboys will end after the season.

It’s December, and the Cowboys are dealing with typical NFL problems.

They have to start an injured running back, and they have to hope their starting linebacker starts playing like he’s not injured.