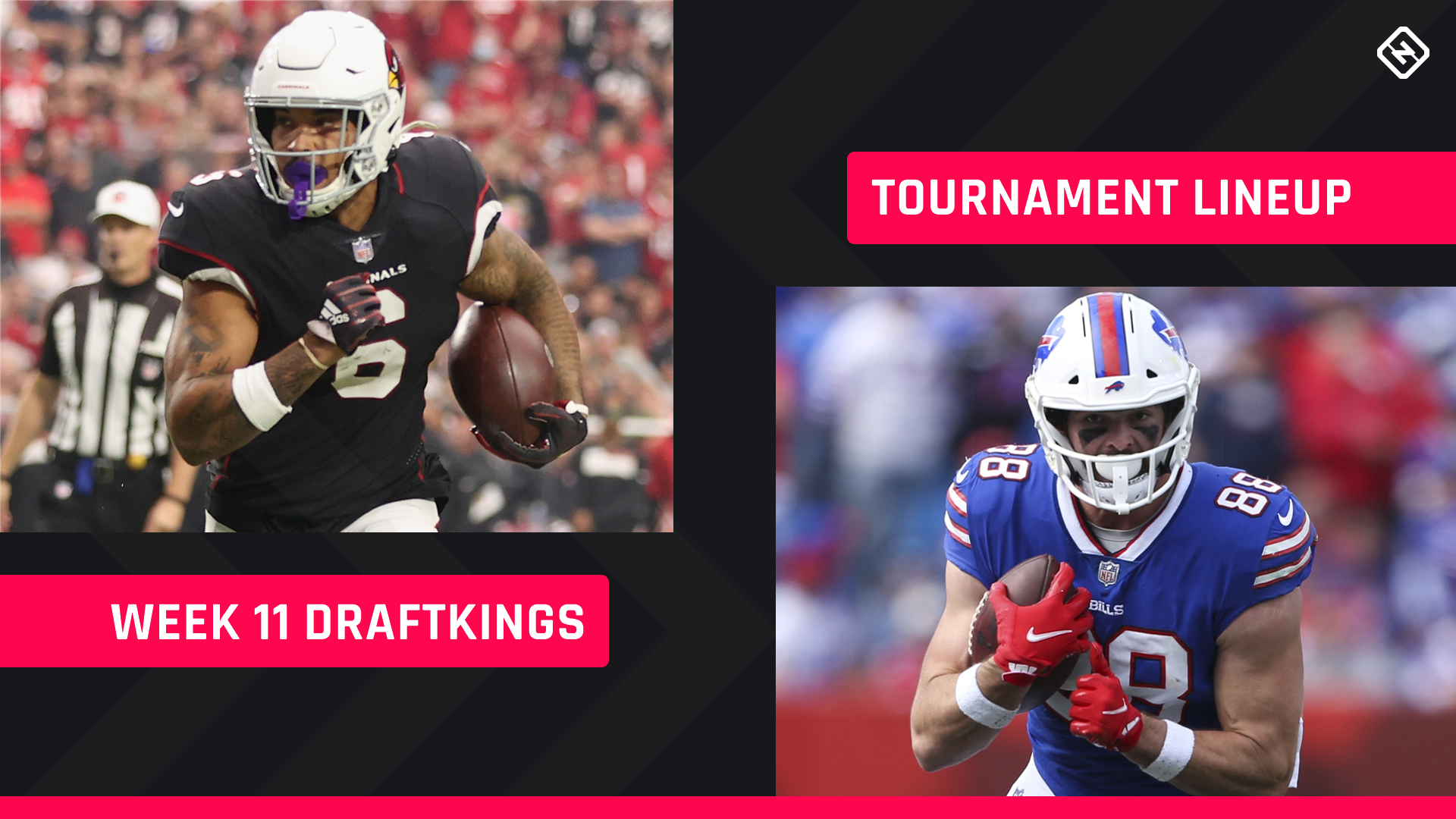 We’re on the hunt for another solid DFS performance with our Week 11 DraftKings tournament lineup. Paying up for Jonathan Taylor and standing by the Cowboys defense stood out as profitable decisions from last week’s entry. Christian McCaffrey highlights this week’s lineup in spite of his price tag. There’s enough value on the slate to fit him into the mix with relative ease. Elsewhere, we’re going to lean on an enticing stack while also ordering up a serving of chalk.  Byes and prime-time games take away some key daily fantasy football studs, but our picks feature a nice mix of stars and boom-or-bust sleepers at wideout, which is usually the mix you want in GPP contests.

Before we break down our picks, here are the most notable scoring rules for DraftKings contests: Full-point PPR, four-point passing TDs,  three-point bonuses for 100 rushing yards, 100 receiving yards, and 300 passing yards.

QB Joe Burrow, Bengals @ Raiders ($6,600). The Bengals have not been sharp coming out of their bye in recent seasons, but we’re going to bet on Burrow nonetheless. He’s thrown for three touchdowns in three of his past four contests, and the Raiders appear to be unraveling. This represents a prime bounce-back opportunity for Burrow and Co.

RB Christian McCaffrey, Panthers vs. Football Team ($8,900). McCaffrey is up to his old tricks and will be a threat to claim DraftKings’ three-point bonus for eclipsing 100 yards rushing and receiving. It’s probably not fair to place all of the blame on Sam Darnold for the Panthers’ recent struggles, but they certainly looked a hell of a lot better with P.J. Walker and Cam Newton under center against the Cardinals.

RB AJ Dillon, Packers @ Vikings ($6,200). With Aaron Jones (sprained MCL) looking at a potential multi-week absence, Dillon will have an opportunity to make the backfield his own. Even before assuming lead duties midway through last week, Dillon had eclipsed the double-digit-touch threshold on five occasions, so an increased workload shouldn’t be a major adjustment.

WR Ja’Marr Chase, Bengals @ Raiders ($7,200). Chase has been playing the role of alpha receiver for the Bengals for several weeks now. He’s received 10-plus targets in three of his past five contests, including a team-leading 13 in Week 9. The Bengals need a win, and that means Burrow and the coaching staff will lean on their best player. If Burrow performs as well as we expect, Chase is very likely to follow suit.

WR Elijah Moore, Jets vs. Dolphins ($4,900). Moore continued his second-half breakout in a blowout loss to the Bills, turning six targets into a 3-44-1 line and 13.4 DraftKings points. The Dolphins present a more vulnerable opponent — at least on paper — especially if they’re still riding high over what will go down as their marquee victory of the 2021 season. Moore has caught 16-of-20 targets for 195 yards and three touchdowns over the past three weeks and will be in a position to post another worthwhile outing.

WR Marquez Valdes-Scantling, Packers @ Vikings ($3,900). We don’t love rostering a running back and wide receiver from the same team — we’re certainly not betting on a Dillon-to-MVS touchdown pass — but it’s a compromise we’re willing to make in this week’s slate. Throw last week’s two targets and 1-41 line out of the window. The only number DFS players need to worry about here is the season-high 49 snaps Valdes-Scantling played as he puts his hamstring injury further behind him. MVS’s game is about big plays, and the environment on Sunday should be better suited to his talents.

TE Dawson Knox, Bills vs. Colts ($4,000). Dawson’s 49 snaps were the second fewest of the season, but the most important takeaway was his return to action after a two-game absence. It’s not as if the Bills needed him against the Jets, but the Colts — a team that has been heavily victimized by tight ends — will present a stiffer challenge on Sunday, and force more hands to be on deck.

FLEX (RB) James Conner, Cardinals @ Seahawks ($6,100). Conner should continue to handle a bit more work in Chase Edmonds’ stead and continue serving as a touchdown threat. He leads the league with 11 rushing touchdowns and has added a 12th through the air. The Seahawks have allowed the eighth-most rushing yards per game in the NFL this season and the second most DK points per game. If starting quarterback Kyler Murray (ankle) returns, he will provide a boost to the running game and the offense overall.

DEF Chiefs vs. Cowboys ($2,200). This matchup looks scary on paper, there’s no doubt about that. Perhaps beating up on a Raiders team doesn’t warrant renewed confidence. However, Cris Collinsworth spoke during NBC’s Sunday Night Football broadcast about the growth and personnel improvements the unit has experienced. We’re not expecting them to shut down the Cowboys, but if the Chiefs can at least slow them down and/or generate a takeaway or two, they’ll do enough for us given their low price tag.