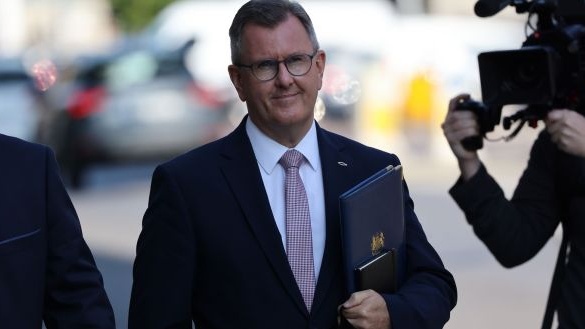 The DUP leader Jeffrey Donaldson has urged a continued focus on efforts to remove the “Irish Sea border”.

Talks remain ongoing between the UK government and the European Union aimed at resolving issues surrounding the Northern Ireland protocol.

While some progress on medicines was welcomed, the UK team was understood to be disappointed that there has been little in the way of progress on the flow of goods between Britain and Northern Ireland, while governance and subsidy control remain points of contention.

On Saturday unionists in Northern Ireland visited about 250 Orange Halls across the region to sign a declaration against the protocol.

Harold Henning, deputy grand master of the Orange Order, emphasised the depth of feeling among unionists against the protocol in terms of trade and the impact on the union.

He said at this stage they were leaving it for politicians to “sort out”, but suggested rallies could be called in future if deemed necessary.

The DUP has urged the government to trigger Article 16 of the protocol, which would suspend parts of the agreement and risk a major escalation in tensions with the EU.

Mr Donaldson has also threatened to withdraw his party’s ministers from the Stormont Executive, effectively collapsing the institutions if progress is not made over the protocol.

“Left unchallenged it will damage our country and our union in the longer term. Northern Ireland’s place within the UK internal market must be respected and protected,” he said.

“As UK citizens, we should not be subject to foreign powers whilst all the time Northern Ireland diverges further from the rest of the UK.

“We have made progress in focusing minds on this. It is only through our determination that the EU and UK Government are back at the talks table. Unionists should keep focused and together we can see a resolution to this.” – PA