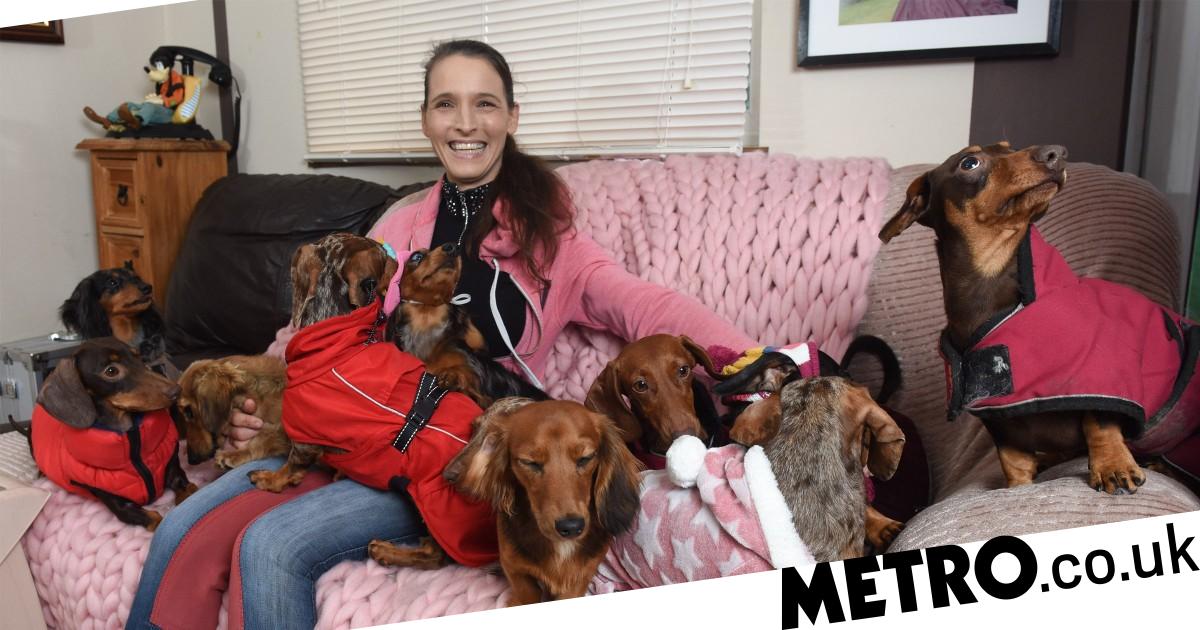 A woman from Shrewsbury loves her 12 miniature dachshunds so much that she’s spent more than £23,000 on them over the past four years.

Owner Claire Membury bought her first sausage dog a few years ago and, since then, has fallen in love with the breed.

The 47-year-old dog groomer has even moved her bedroom (that she shares with her husband Leigh) downstairs, to be closer to her furry friends – who now regularly sleep in their 8ft bed.

Mum-of-one Claire also loves to spoil her sausage dogs, admitting that they have a bigger wardrobe than her – which features designer labels such as Gucci.

She said: ‘Their wardrobe is double the size of mine, if not bigger. I’ve spent hundreds, if not thousands on their clothes.

‘They’ve all got shoes, raincoats, hats and warm jackets which can be quite practical in the cold months.

‘Donna has sunglasses to protect her eyes and Princess has her own knickers.

‘They all love to be dolled up.’

The pampered pooches also share two orthopaedic beds, which cost £500 each, and are fed on a raw food diet.

Claire adds: ‘They have everything from chicken feet and rabbit ears to fruits, vegetables such as celery, and lots of tablets and vitamins.

‘Sometimes they get a sweet treat too which they love.

‘They eat better than we do.’

They also have free roam of the garden.

Claire says: ‘I never take them out on walks outside of the house, as I feel people will think I’m a bit crazy.

While the dog mum admits that caring for her canines is like a full-time job, she says their adorable natures make up for it.

‘Miniature dachshunds are just incredibly perfect dogs, they’re to die for,’ she adds.

‘All of their personalities are out of this world, that I just keep going out and buying them.

‘I dread to think how much I’ve spent on them – but I can’t help it.

‘I’d hate if anything ever happened to them and sometimes worry about dog theft. I’d rather they steal my husband.’


MORE : Lonely dog has spent nearly all her life in kennels – can you give her a home?


MORE : Sausage dog who was so overweight she couldn’t walk gets on track to save her life