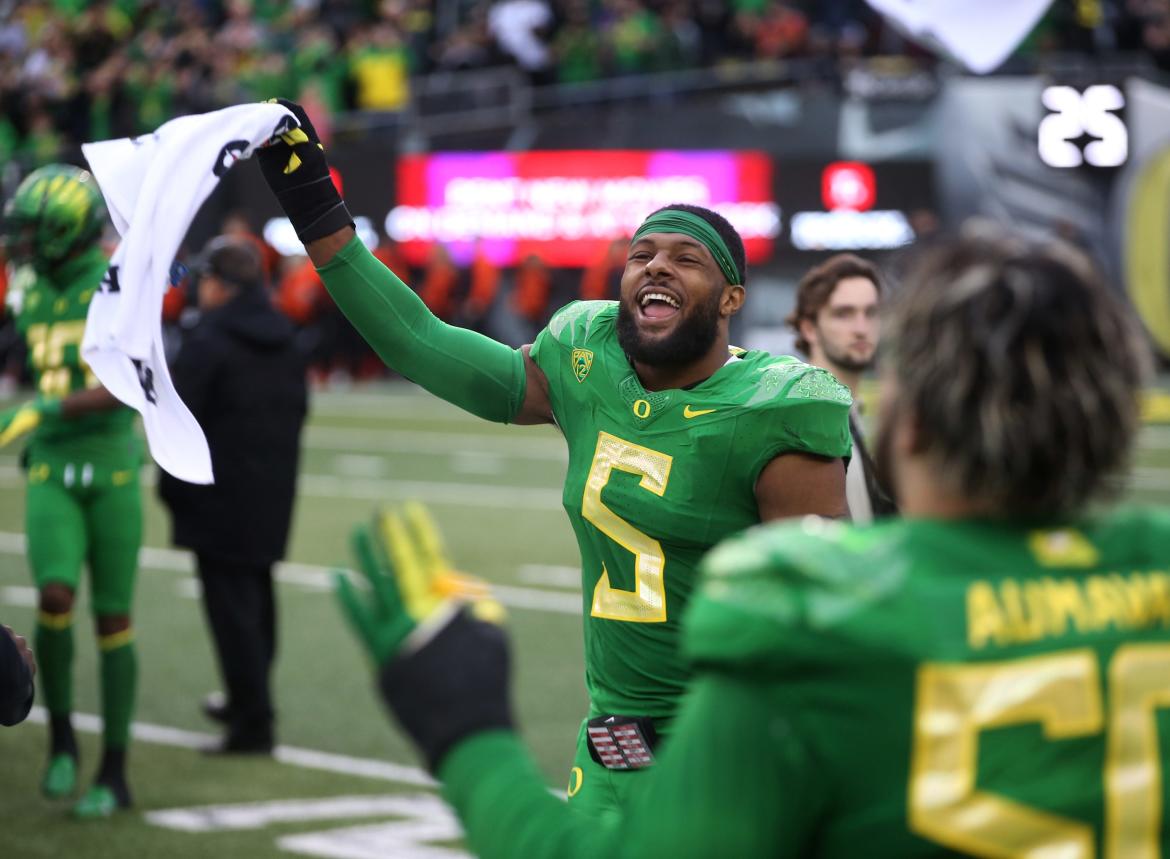 The Lions’ first win of the season was certainly sweet, but one more victory could have major draft implications.

With the NFL season hitting the stretch run and the NCAA football season wrapping up, ESPN draft analysts answered questions about the draft and updated their top prospect lists (both chose Michigan football defensive end Aidan Hutchinson at No. 1, slightly ahead of fellow edge-rusher Kayvon Thibodeaux of Oregon).

MORE LIONS: Breakthrough game vs. Vikings ‘can do a lot’ for Jared Goff

At 1-10-1, Detroit is in line for the top pick and also owns a second first rounder (via the Los Angeles Rams). But the Jacksonville Jaguars and Houston Texans each have 10 losses, too, so if the Lions take another victory, they could slide down the draft board.

Here’s what Mel Kiper Jr. and Todd McShay had to say this week about the No. 1 pick in the 2022 draft and the Lions’ possibilities for their second pick, with a couple schedule notes to keep in mind:

Battle of the bads

Week 10’s ugly tie between the Lions and the Pittsburgh Steelers could turn problematic for one-win Detroit. That’s because the 2-10 Texans and 2-10 Jaguars play each other in Week 15.

Both Houston and Jacksonville teams should be underdogs in all other matchups, projecting a 15-loss season for one of those teams (barring a tie). The Jags also play the three-win New York Jets on Dec. 26; the Lions have not-unwinnable games remaining against the Denver Broncos and Atlanta Falcons. And who knows whether the first-place Green Bay Packers will be resting in Week 18?

Kiper and McShay say the Texans, Jags and Lions, along with others, should use the No. 1 selection on Hutchinson or Thibodeaux — but the Jags could be eyeing Alabama tackle Evan Neal to help protect previous No. 1 pick Trevor Lawrence.

While hand-wringing over the Lions’ draft slots is understandable, Detroit needs talent in so many areas that a fall from No. 1 to No. 3 — or No. 19 to No. 26 in the case of that Rams pick — shouldn’t be catastrophic.

The Lions could use a little bit of everything — though they should feel pretty good about running back and tight end, so there’s that! — but Detroit fans probably won’t be as excited about another offensive tackle or defensive back. However, those are the best prospects available from 3-6, according to Kiper and McShay.

Those who want the Lions to grab a QB may have to wait until later in the first round. Neither Kiper nor McShay see a top-10 pick among this class of quarterbacks, though they caution that if one team falls in love with a guy, a passer could be taken early.

Kiper and McShay both rank several quarterbacks in the 20s — where Detroit is likely to have its second first-round pick.

That second first-rounder, courtesy of the Matthew Stafford trade , is projected to land in the mid-to-early 20s. A couple more Rams losses could push that pick into the teens.

But if Stafford, a past Lions No. 1 overall pick, has a run to a division title or Super Bowl in him, that pick would fall closer to No. 30.

McShay said the Lions, more than any other team, must nail the second early pick. Four teams hold multiple first rounders but he highlighted Detroit’s needs most.

“Their top pick could be Hutchinson or Thibodeaux, which means they need to get lucky at quarterback toward the end of the round if they want an upgrade on Goff. I don’t see (Kenny) Pickett or (Matt) Corral being available, leaving (Malik) Willis as probably the best option,” McShay writes. “They’d have to develop him, though. Maybe it’s (Desmond) Ridder or Sam Howell (North Carolina). And if they stick with Goff or don’t see a QB worth taking, can they address massive issues at wide receiver or cornerback? No matter the direction, Detroit has to ace Day 1.”

Kiper (at No. 20 overall) and McShay (at No. 15) each begin their quarterback rankings with Pickett, who had 4,319 yards and 42 touchdowns for Pitt in a Heisman-finalist campaign. Neither raved about the 6-foot-3, 220-pound passer’s physical tools — they appreciate his ability to scramble — but both like his improvement over 40-plus college starts, patience in the pocket and toughness.

If Pickett is off the board, Ole Miss’ Corral (3,333 yards and 20 touchdowns, completing 68.7% of his passes) is right behind on each list. Ridder and Willis are possible options in that 25-30 range, according to the draftniks.

Kiper said he thinks multiple quarterbacks could be taken before the first round ends, citing the collective bargaining agreement.

“Remember that fifth-year options go only to first-round picks, and it’s an important tool for teams trying to get that extra year of a young quarterback,” Kiper notes.

Ridder (over 10,000 career yards and 87 career touchdowns) has the most experience and one of the highest ceilings among quarterbacks, Kiper said. He could surprise people as an early QB off the board. Would his potential, or that of Willis, be too much for the Lions to pass on? After the 6-4, 215-pound Ridder mostly played Group of Five teams in his career, he’ll face Alabama’s talented defense in the College Football Playoff semifinals. (The

“He has the arm talent, size, running skills and intangibles to push him up the board in a down year for elite quarterbacks,” Kiper writes. “Pickett is still my top-ranked QB, but Ridder’s ceiling will entice teams.”

If the Lions are looking toward 2023, when they could again be picking in the top 10, 2021 Heisman finalists C.J. Stroud and Bryce Young are early favorites. Notre Dame transfer Phil Jurkovec is giving Boston College fans Matt Ryan flashbacks and will be back in 2022. Coastal Carolina’s Grayson McCall can throw and run and might get some attention, too.

Although 2023 draft talk feels premature, these are certainly questions the Lions will be mulling until they’re on the clock in April.

[ The Free Press has started a new digital subscription model. Here’s how you can gain access to our most exclusive content. ]