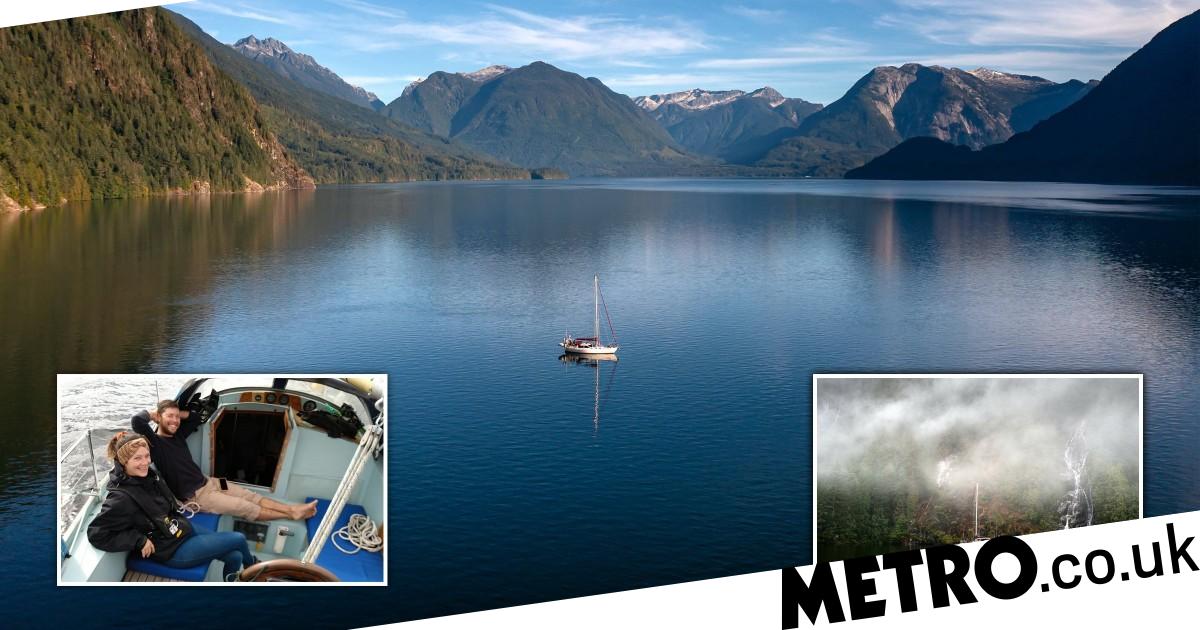 Taryn Pickard and her husband Logan had never sailed before – but that didn’t stop them from quitting their jobs, buying a boat, and setting off to travel the world.

The couple decided to ditch their more traditional lifestyles in 2019, having been inspired by seeing others living on boats while they were in Ireland.

They’ve been on the water ever since, now only taking a trip to land for supplies once a month.

Taryn, a 32-year-old ex yoga teacher from Vancouver Island, Canada, said: ‘We first started dreaming of the boat life when we were in Ireland.

‘We noticed that people were doing it a lot over there, and the idea of not being restricted to one location really appealed to us.

‘Because of the cold climate in Canada we weren’t aware people were actually doing it, but when we looked on YouTube we found out it was quite popular.

‘So, with no past sailing experience we signed up for a five day crash course in our local area, and dived right in!’

The pair’s first boat cost them $27,500, but they sold it soon after as they realised it was too small for comfortable living.

Unfortunately, this vessel had problems of its own – it wasn’t robust enough to cope with more extreme weather; a problem as Taryn, Logan, and their ten-year-old dog Max had planned to travel north and sail through heavy ice.

After making the necessary upgrades through the spring, the couple – along with their dog – set off on a journey through the Broughton Archipelago islands this summer.

These islands off the east cost of Canada are extremely remote with no phone service and tiny populations – meaning they spent the majority of their time alone.

The boat may be smaller than your usual on-land dwellings, but it does the trick. It has two bedrooms, a kitchen, a bathroom, and a large decking area – plenty of space for the three adventurers.

Now, the couple’s day-to-day activities include fishing (they eat a lot of fish they catch themselves), snorkelling, and paddleboarding, as well as reading books and watching Netflix.

‘We almost run out of food and water some times because of our desire to be completely on our own,’ said Logan.

‘At the beginning we didn’t realise how much food we actually needed to last us, and it can be tricky meal planning at times.

‘We have a 600 litre water tank which we use for essential things like cooking and showering on board – but we try and minimise our fresh water usage.

‘That means often we’ll just wash in the sea or dock at local marinas to use the facilities there.

‘We try to live off the ocean as much as we can and fishing is a big part of our day.

‘Like most people, in the evenings we watch Netflix but only if we have service – which is rarely!

‘It took us a while to get used to sleeping on the boat because of the constant rocking, but our cabin is really cozy and our bed is super comfortable.’

If you’re wondering how on earth the couple afforded quitting their jobs and buying multiple boats, here’s the answer: real estate.

The pair had made a bunch of investments in property, then did up and sold three homes to fund their lifestyle.

As a result, Logan was able to leave his job as a mechanic, while Taryn can focus full-time on photography.

Taryn said: ‘We’ve always been saving to do something different with our lives we just didn’t know what that was.

‘Instead of buying nice things and going on expensive holidays, we’ve just invested in property, and are now able to live off the money we earn from that.

‘We now want to live our lives with as little responsibility as possible, and so far it seems to be going well.

‘We have no plans to have kids, but we do centre our adventures around our beloved Husky-Lab Max, who’s been with us every step of the way.

‘In our opinion, flying isn’t the best way to see the world, and now were finally settled on our boat, we know the travel opportunities are endless.

‘We plan to sail through the north-west passage to Europe in the future, but for now were happy exploring the Canadian coast line.

‘Life at sea feels completely natural to us and neither of us want to go back to regular living any time soon – we really are living the dream.’


MORE : How to be happier with less and ditch your endless need for stuff