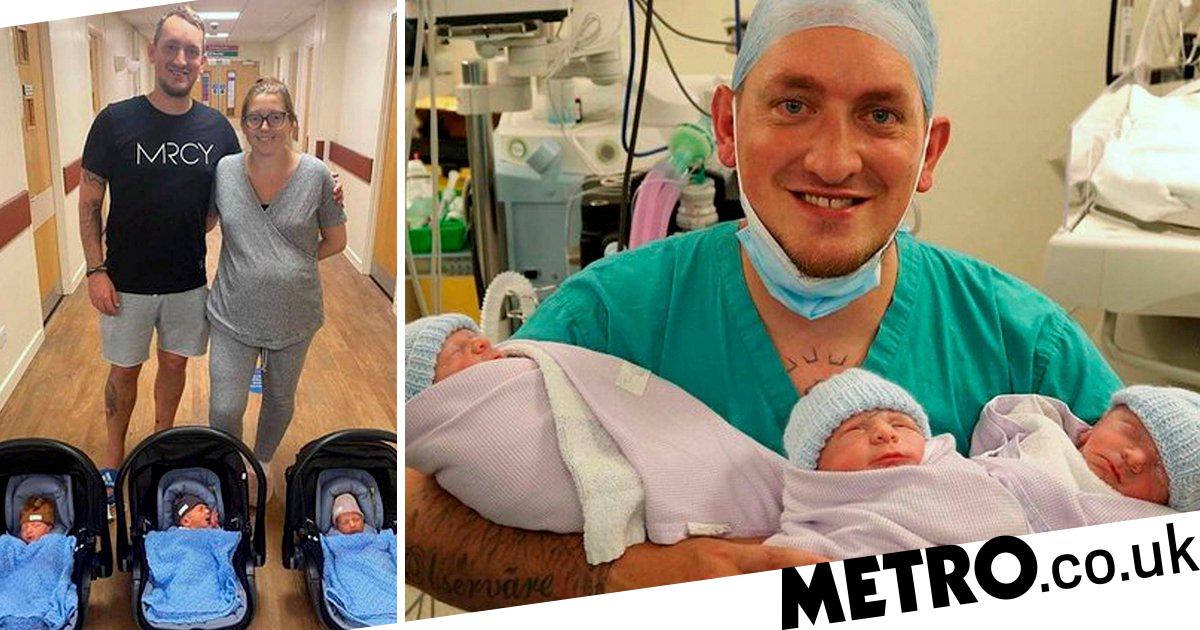 A couple from Houghton, in Tyne and Wear, have defied incredible odds after their triplets were discovered to be identical – which is incredibly rare.

Alex and Amy Lindsay were only expecting to see just one baby when they attended their 12-week appointment, but were instead told there was three instead.

The couple already had two children, four-year-old Elijah and two-year-old Zion, and received a ‘massive shock’ when they saw the babies on the scan.

Amy, 31, says: ‘I was on the bed and Alex said he could see quite a lot of movement on the scan. That’s when the sonographer asked if there was a history of twins in the family and revealed there were two babies.’

But the sonographer had got it wrong and gasped as they realised there was a third baby.

‘We were initially alarmed as we thought she’d noticed something wrong with one of the babies but that’s when she revealed there was another one in there. At that point I got quite emotional,’ Amy continues.

The couple were planning for this to be their last child, and as they already had two children, they were concerned as to how they would manage another three babies.

Amy adds: ‘I just kept thinking, I’ve only got two arms, how am I going to hold and feed them?’

Amy’s mother thought her daughter and son-in-law were joking until she saw the scan for herself, Alex explained.

He says: ‘When we first found out it was a real shock, but we are a Christian family, and feel blessed as children are a gift from God. This really helped us to get through what was a potentially dangerous pregnancy.’

Amy gave birth to her three sons on July 9 at the Sunderland Royal Hospital, naming them Abel, Asher, and Azariah, who were all identical.

Though estimates vary, the odds of having identical triplets are between one in 60,000 to one in 200 million, meaning the couple were very lucky.

Amy was very happy, particularly because it was a high-risk pregnancy and said she felt ‘really blessed’.

‘There’s always a risk when having triplets but they were all really healthy and a good weight. Abel was 6lb 2, Asher was 5lb 12, and Azariah was 5lb 11,’ Alex says.

Despite how happy the couple is with their new children, Amy adds: ‘The biggest challenge comes at feeding time when you’ve three babies all wanting to be fed at the same time,’ even though ‘they’re very settled babies’, while Alex claimed space is an issue.

The family are lucky to live in a four-bedroom detached house, but have still had to move their dining table and chairs to make more room.

‘My friends keep joking that when the boys are older we can start our own five-a-side team,’ Alex says.


MORE : Meet the triplets who were born in different decades


MORE : Lesbian couple who dumped boyfriends for each other both have babies after falling pregnant from the same sperm donor