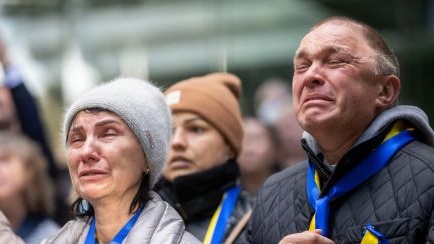 In a letter sent by the Department of Housing to city and county councils, the Government says properties will be needed for a minimum of six to 12 months as the current supply available to house those fleeing the war is likely to soon run short.

Councils have been asked to find vacant buildings within 3km of towns and cities which are configured for multi-occupancy use or could be repurposed. These buildings could be privately-owned or owned by the HSE, Department of Defence, education sector or other departments or State bodies, it adds.

The letter says that “given the likely influx of refugees in the coming weeks, options available to International Protection Accommodation Services will be exhausted quickly, and other solutions will be needed to fill the inevitable gap in the short term”.

A comprehensive list of all possible properties is due to be submitted by all authorities by Wednesday.

The Civil Defence said its former headquarters in Dublin’s Phoenix Park, Ratra House, could be used to house about 25 refugees on a short-term basis.

If it is used, catering support could be required, the Civil Defence said.

The volunteer-led organisation has been assisting in the response to the influx of refugees by providing basic welfare and medical care at the “one-stop shop” reception centre for people arriving at Dublin Airport and acting as stewards to the processing area.

The organisation has set up rest centres for people arriving from Ukraine in more than a dozen counties, including Cork, Kerry, Meath, Kilkenny, Monaghan and Roscommon.

A Government spokesman said the Department of Foreign Affairs was in continuing contact with about 40 Irish citizens in Ukraine, whom it was advising to stay in a secure place until they felt it was safe to leave.

He said the department was offering “ongoing support” to Irish couples who had surrogacy arrangements with Ukrainian women, but declined to be drawn on specifics. The Irish Embassy in Kyiv is operating remotely from Dublin, he said, while six staff continue to work at the Irish Embassy in Moscow.

Minister for Children Roderic O’Gorman said 22 unaccompanied minors had arrived in the State from Ukraine, and that this was a “small but growing” number. He said vetting would be put in place for offers of shared accommodation where a child or vulnerable adult was involved, with a targeted turnaround time of seven days.

Minister for Social Protection Heather Humphreys confirmed that people hosting refugees would not see their social welfare payments such as the Living Alone Allowance affected.