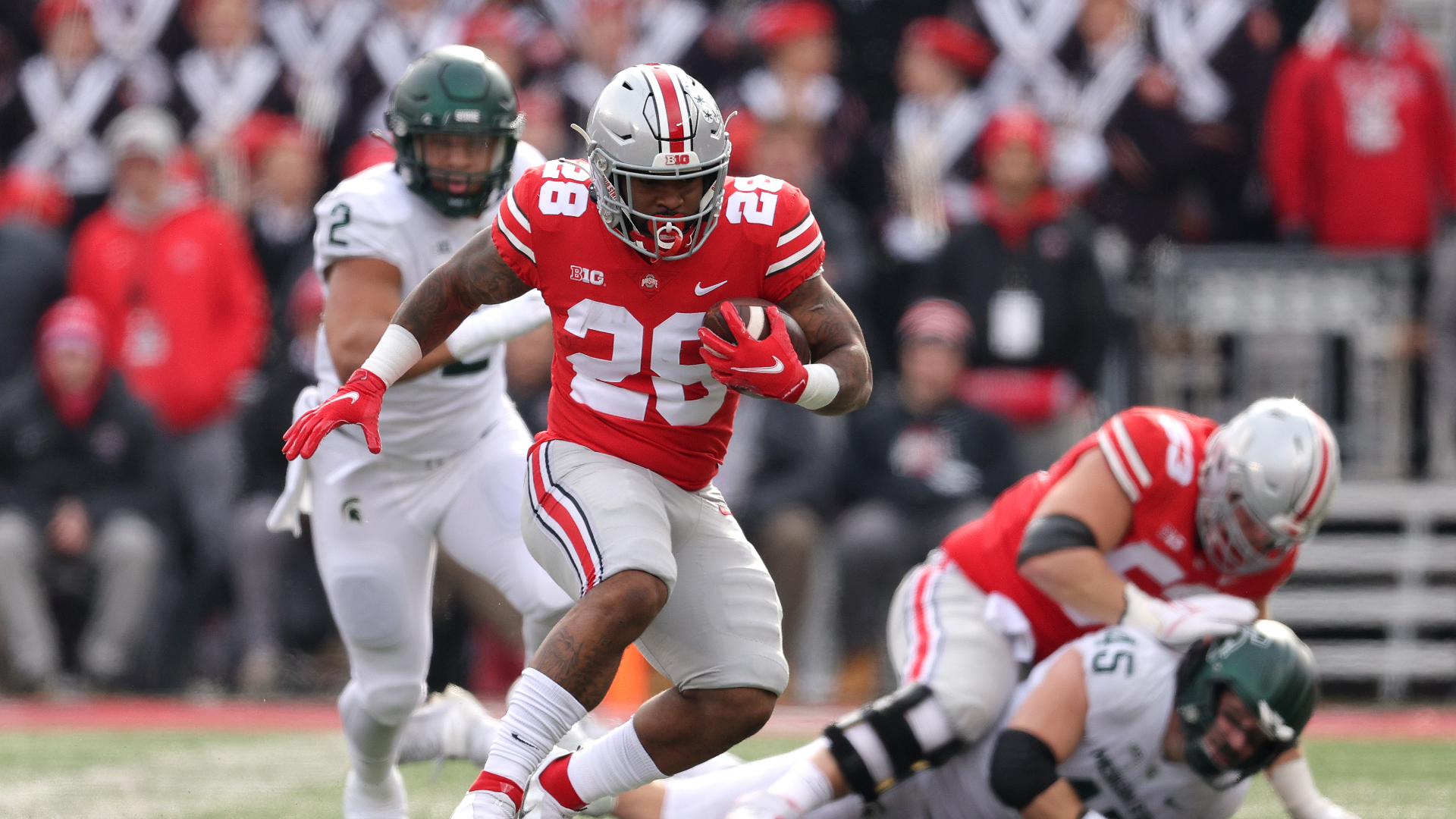 No. 4 Ohio State beat No. 7 Michigan State on Saturday, an expected outcome by many who watch college football. But the way the Buckeyes routed the Spartans — jumping out to a 49-0 halftime lead — was completely unforeseen.

How will that affect the latest College Football Playoff rankings?

MORE: Should OSU be No. 2? Buckeyes leave no doubt in blowout against Spartans

The Buckeyes were utterly dominant in the 56-7 victory over Michigan State, a score that is impressive in itself but is even more incredible considering it came against a top-10 team. It could even be enough to sway the playoff selection committee to bump Ohio State a spot or two in the latest rankings.

That’s where things get interesting, considering the current No. 3 team in the country — Oregon — has a head-to-head victory over the Buckeyes. The committee has already shown it doesn’t prioritize such victories in its rankings (just look at Michigan vs. Michigan State) but it will still be worth monitoring as the season progresses, especially if teams remain with only one loss.

With that, Sporting News breaks down what Ohio State’s win means for the rest of college football’s elite:

Alabama, like Georgia, is in position to control its own destiny over the last few weeks of the season. It took a punch in the mouth from No. 21 Arkansas on Saturday, but still won 42-35 in Tuscaloosa. Considering how close the game was and how poorly Alabama played at times, it wouldn’t be a surprise if the committee drops the Crimson Tide a spot — or two — to make room for the Buckeyes after their impressive victory. That changes nothing for the Crimson Tide, which still have to beat Georgia in the SEC championship game to make the playoff — either they get in as the No. 1 overall seed, or miss out entirely.

How much longer will Oregon remain ahead of Ohio State? The Ducks have the head-to-head victory from Week 2, a win that looks more and more impressive with each passing week. But it’d be hard to argue Oregon is currently better than Ohio State after the Buckeyes’ dominant win over Michigan State. The Ducks can do themselves a big favor if they put together an impressive performance against No. 23 Utah on Saturday night.

Oregon has to be happy Ohio State beat the Spartans so convincingly, considering it makes its resume that much more impressive. But the Ducks are also in danger of being jumped entirely by the Buckeyes. Still, Oregon should manage to play its way into the playoff if it manages to win out and win the Pac-12. The question is whether it would face No. 1 Georgia/Alabama as a 4-seed or Ohio State as a potential 2- or 3-seed.

What will the selection committee think of Ohio State’s win? It’s hard to say, but it’s worth asking if the Buckeyes’ dominance was enough to give them control over their own destiny. Yes, Oregon is still a thorn in Ohio State’s side that must be dealt with, but if the Buckeyes continue to put up scores like that against Michigan and in the Big Ten championship game, it might not matter who they lost to earlier in the season: They’re just that good.

In the short term, the Buckeyes have just as good a chance of moving up a spot or two as they do remaining at No. 4.

Cincinnati couldn’t have been too pleased with Saturday’s outcome, considering the Bearcats have been tied to Ohio State for that last spot in the four-team playoff. The Bearcats have been playing behind the eight ball all season due to their Group of 5 status, and wins like Ohio State enjoyed on Saturday will do nothing to help their playoff eligibility. The Bearcats will likely remain at No. 5 in the next CFP poll, and still have opportunities against SMU and Houston, but it might be too little in the eyes of the committee.

Michigan isn’t “happy” that Ohio State beat Michigan State, especially considering the Wolverines already lost a heartbreaker to the Spartans earlier this year. But Michigan now controls its destiny in the Big Ten, needing only to beat the Buckeyes in “The Game” to head to Indianapolis as the Big Ten East representative. That’s easier said said than done, considering they haven’t won in this series since 2011. That said, the Wolverines will head into the matchup with a 10-1 record following their 59-18 win over Maryland. A win over Ohio State and in the Big Ten championship game almost certainly gives the Wolverines a playoff spot.

First, Michigan has to know it belongs on the same field as Ohio State. Otherwise, it’ll be nine straight for the Buckeyes in this series.

MORE: Why Lincoln Riley was heated at end of Baylor loss

Notre Dame is like the Bearcats in that they need considerable help to get into the playoff — especially considering the Fighting Irish lost to Cincinnati head to head this season. They can win out, but it’s likely they’ll remain outside the top four unless Ohio State, Michigan, Alabama, Oregon, Oklahoma and Oklahoma State all lose an additional game. That’s just too much to ask. In the short term, look for Notre Dame to move up a spot to take over for Michigan State in the No. 7 spot following their 55-0 win over Georgia Tech.

Saturday’s Michigan State-Ohio State result won’t have too much of an effect on the Cowboys, who need to win out just to have a chance at the playoff. They have Texas Tech and Oklahoma left on the schedule, plus a potential date with Baylor in the Big 12 championship game, to pad their resume. But they likely need several losses in front of them to make the playoff. Otherwise, Oklahoma State is likely competing only for a Big 12 championship and New Year’s Day 6 berth. The same is true for Oklahoma, which lost the ability to control its destiny with a loss to the Bears last week.

Michigan State’s season is over inasmuch the College Football Playoff and Big Ten championship are concerned. Even if this was the Spartans’ first loss of the season, the final score — 56-7 — was bad enough to likely exclude the team from playoff contention. So where does that leave Michigan State now? Out of the top 10, likely in the 15-18 range in the latest set of rankings. The Spartans can reach 10 wins next week vs. Penn State — not a bad season at all for second-year coach Mel Tucker — but this one will leave a bad taste in the team’s mouth for a while.