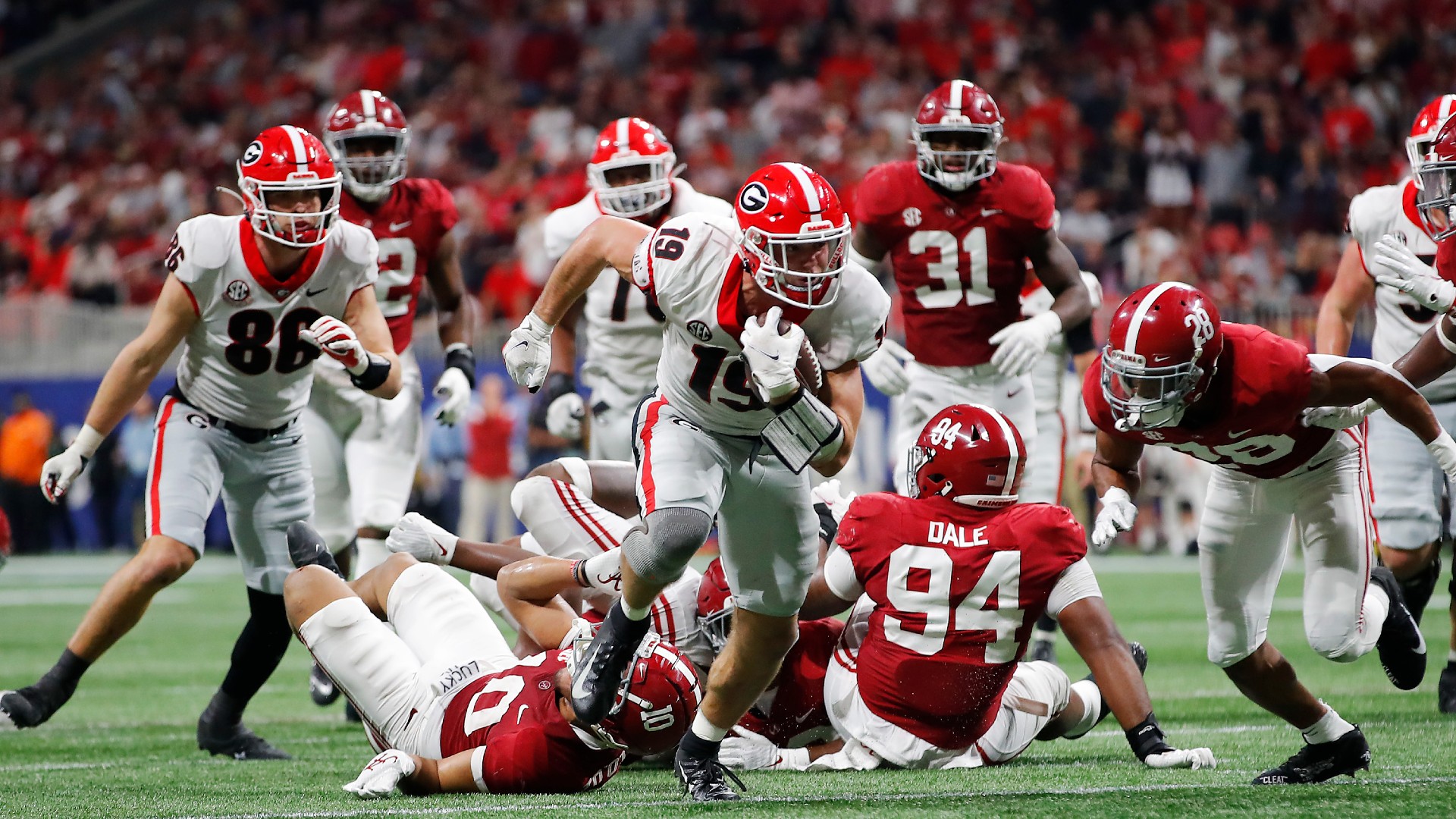 The College Football Playoff pairings will be unveiled Sunday, but Sporting News is putting out its best guess now as to how those final pairings will look for 2021.

Conference championship weekend had shakeups. No. 3 Alabama beat No. 1 Georgia 41-24 in the SEC championship game, which means both could see each other in a rematch in the College Football Playoff. The Crimson Tide will make the playoff for the seventh time, and the Bulldogs should follow based on a dominating unbeaten regular season.

No. 9 Baylor upset No. 5 Oklahoma State 21-16 in the Big 12 championship game, which opened the door for No. 4 Cincinnati to become the first Group of 5 school to make the four-team playoff. The Bearcats held off Houston 35-20 and were impressive in the second half. They also have the head-to-head victory against No. 6 Notre Dame as insurance. Who knew Cincinnati would be the sure thing?

That leaves a pretty straight-forward playoff picture, even if the seeding is subject to debate.

With that, here are SN’s final CFP predictions for 2021:

Four in the College Football Playoff

Michigan did not have an emotional letdown after the victory against Ohio State. The Wolverines took advantage of the big play in the first half against Iowa in the Big Ten championship game. Blake Corum scored on a 67-yard TD run and Donovan Edwards threw a 75-yard TD pass to Roman Wilson on a trick play. The defense did the rest in a 42-3 victory. Michigan has a case for the No. 1 seed, but Alabama will be hard to top given the victory against Georgia. Still, Jim Harbaugh has the Wolverines back on the big stage again.

Georgia’s defense, which had allowed 6.8 points per game in the regular season, could not slow down Young and the Crimson Tide. That could open up some debate about where the Bulldogs should be positioned and whether Notre Dame deserves consideration. The problem is the Irish didn’t play in a conference championhship game, and the Bulldogs were the best team by far in the regular season. Georgia has three Top 25 wins with a loss to presumed No. 1 Alabama. Kirby Smart will have the Bulldogs back in the playoff for the second time.

The Bearcats will make history. Cincinnati broke open a one-point halftime lead against Houston in the American Athletic Conference championship game for an impressive 35-20 victory. The backfield tandem of Desmond Ridder and Jerome Ford delivered on the big stage. Ridder passed for 190 yards and three TDs. Ford scored on runs of 79 and 42 yards, respectively, and totaled 187 yards. The defense locked down the Cougars in the second half, and Cincinnati coach Luke Fickell did not take the Notre Dame job. There is no excuse to leave this Group of 5 school out of the playoff, and they will get a chance to prove it against a SEC powerhouse.

The Irish had quite a week off the field. Brian Kelly is out. Marcus Freeman is in. Notre Dame likely will just miss the College Football Playoff because of the head-to-head loss to Cincinnati. The Irish won their last six games by an average of 27.3 points per game, but the lack of a conference championship game can be debated as usual. Notre Dame will now settle for a New Year’s Day Six berth, likely against the ACC champion.

Baylor won the Big 12 championship and knocked the conference out of the playoff at the same time. The Bears’ goal-line stand ensured a 21-16 victory against Oklahoma State in the Big 12 championship game, and that knocked the two-loss Cowboys out. Backup quarterback Blake Sharpen passed for 180 yards and three TDs, and the defense had four interceptions. Baylor can build on that with second-year coach Dave Aranda at the Sugar Bowl.

The Buckeyes are one of the best cases for an eight-team playoff. Ohio State didn’t play in the Big Ten championship game and had two losses to top-25 teams in Oregon and Michigan. Ohio State averaged 45.5 points per game, and quarterback C.J. Stroud is a good bet to be a Heisman Trophy finalist. The Buckeyes, however, do not have a logical route into the four-team playoff under second-year coach Ryan Day and will likely have to settle for a Rose Bowl berth.

Lane Kiffin worked wonders in his second season with the Rebels with the help of Matt Corral, who passed for 3,333 yards with 20 TDs and four interceptions and added 506 rushing yards and four TDs. Ole Miss had a 2-1 record against ranked opponents this season, and the 10-win season is a nod to the quick rebuild under Kiffin. The Rebels likely will land in a New Year’s Day Six Bowl with this resume.