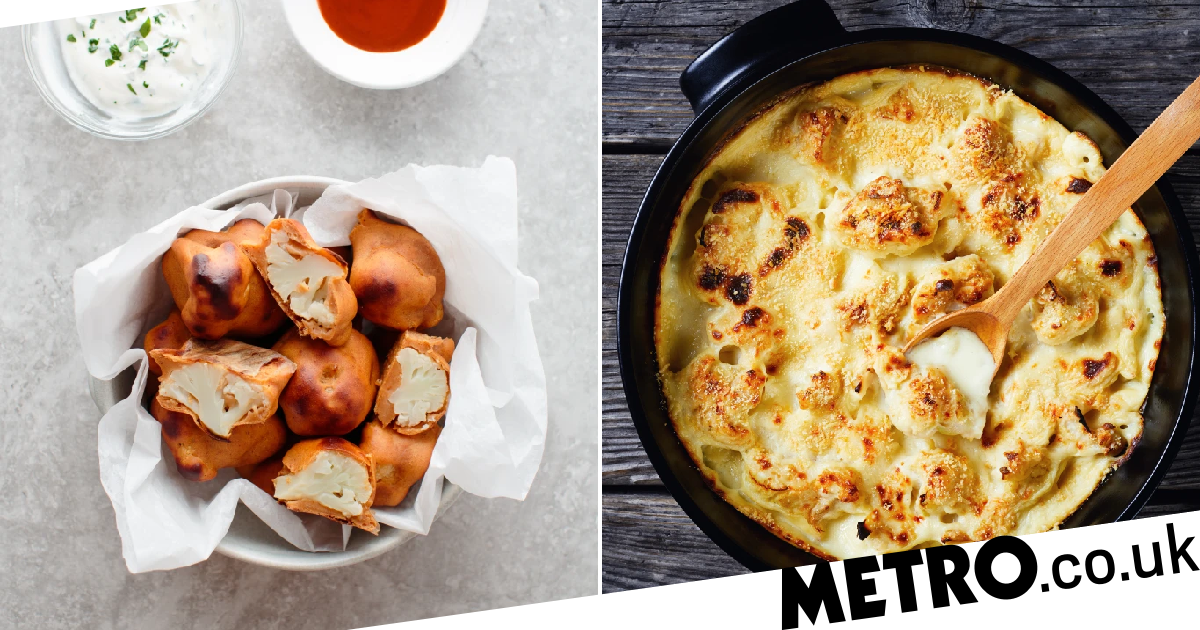 This is because half a million British cauliflowers that flowered too late for Christmas are to be sold at a reduced rate this month.

The lack of cold nights in August and September last year delayed cauliflower growth – so now the veg has flowered slightly later than usual.

As a result, some retailers like Tesco are selling the surplus at a discounted price.

But, despite issues in December, the bumper crop of British cauliflower is now ready for the taking – so there’s every reason to give some recipes a go.

Cauliflower is an incredibly versatile ingredient and is a great substitute for meat.

It can also be made into rice form, or roasted whole with various spices – the possibilities are endless.

So whether you’re doing Veganuary, or simply trying to eat more fruit and veg, we’ve rounded up some recipes to try – to make the most of the discounted cauliflower this month.

2. Start by bringing a large pan of heavily seasoned water up to the boil.

3. In a separate pan heat up the milk gently with the nutmeg, rosemary and thyme, and infuse for ten minutes.

4. Meanwhile melt the butter in another pan. Once the butter has melted add the flour. The flour will form a ball and look like wet sand.

5. Cook the flour and butter on a gentle low heat for 5 minutes to cook out the flour.

6. Pass the milk through a sieve and slowly add to the butter and flour mix, a large ladleful at a time. Once all the milk has all been added and incorporated into the sauce add the cheese, mustards and the Worcestershire sauce.

7. Once all the cheese is melted, taste and season.

8. Cut the cauliflower into florets, place into the boiling seasoned water and cook until soft, for roughly 5 minutes.

9. Drain the cauliflower, place into an ovenproof dish, pour cheese sauce over and bake for 45 minutes until golden brown.

2. Remove the outer leaves of the cauliflower and save for later. Cut off the bottom stem to create a flat base so you can stand the cauliflower on the cutting board. Use a large knife to cut the cauliflower head into 2–4 steaks. Save any small bits, for frying.

3. In a small bowl, stir together the turmeric, mustard, salt and pepper. Brush each side of the cauliflower steaks with the mixture. Heat a large frying pan (skillet) and place the cauliflower steaks flat-side down. Fry until nice and brown, about 5 minutes on each side. Once charred, place the steaks onto a non-stick baking sheet and bake in the oven for another 20 minutes. While the steaks are cooking, make the mash.

4. To make the mash, boil the swede in a large saucepan of water for about 10–15 minutes until soft, then drain. In a heated pan, fry a handful of cauliflower leave in a dash of olive oil until crisp, season with salt and pepper, and set aside. Add the boiled swede to a blender with the coconut milk and cauliflower leaves and blitz until you get a beautifully coloured orange mash. Add salt and pepper to taste and stir through.

5. Serve a generous dollop of mash, top it off with a cauliflower steak.

Recipe from Maple in Canada.

2 Mix together the spices and flour. Add the sunflower spread, maple syrup, milk and buttermilk and mix together until it forms a batter.

(Tip: Batter can be made in advance if necessary. If you can’t get buttermilk, mix 280ml full fat milk with the juice of a lemon.)

3. Coat the cauliflower florets in batter and place on a baking tray lined with lightly oiled baking paper.

4. Bake for 20 minutes until golden brown and slightly catching.

5. Leave for a moment to cool and sprinkle with chopped spring onions or fresh herbs of your choice.

6. Serve with a dip of your choice – hot sauce, blue cheese dip or a maple yoghurt dip is recommended.


MORE : Simple After Eight dessert recipes – from tiramisu to cheesecake