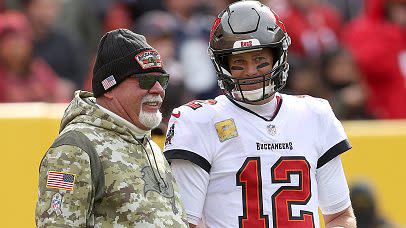 After Sunday’s surprising loss to Washington, Buccaneers coach Bruce Arians blamed quarterback Tom Brady for both of his interceptions, even though one resulted from a hit applied to receiver Jaelon Darden.

On Monday, Arians began to backpedal.

That’s not how the Arians press conference unfolded after the loss. Arians was asked this specific question: “It’s the second straight week that Brady’s had multiple interceptions. Can you just speak to what was going on maybe with the receivers and his performance?”

“No, it had nothing to do with the receivers, it was him,” Arians said.

With only two interceptions, there’s no ambiguity when it comes to Arians saying, “It had nothing to do with the receivers.” There was only one receiver, one interception. If we are to believe Arians on Monday, not on Sunday.

But this is post-truth America, where it’s becoming easier and easier to ignore inconvenient realities. Especially when the fundamental reality for Arians is this — the Bucs won the Super Bowl last year not because of him, but because of Brady. Given the amount of salt that Brady displayed during his “make it quick” press conference on Sunday, chances are he doesn’t appreciate being called out by a head coach who admittedly has little involvement in the offense.

Yeah, Arians made publicly blaming Brady a spectator sport a year ago. Brady took it then. That was before Brady won everyone a Super Bowl ring. This time around, he justifiably has less tolerance for BA’s BS.