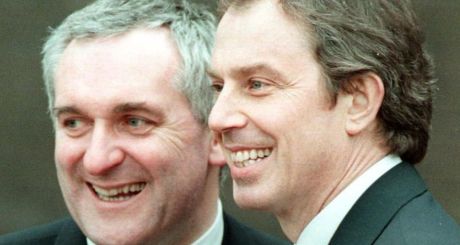 Former UK prime minister Tony Blair and former taoiseach Bertie Ahern are among participants in the Northern Ireland peace process who are set to be invited before TDs and Senators to offer their account of how the deal was done.

The Oireachtas Committee on the Implementation of the Good Friday Agreement is to discuss proposals to hold a series of meetings with the architects of the Belfast Agreement ahead of its 25th anniversary next year.

The committee’s chairman, Fine Gael TD Fergus O’Dowd, has said there is agreement in principle to invite many of the key players to give testimony on the historic agreement, and the committee is to consider the practicalities of the work at a meeting on Thursday.

Fine Gael TD Jennifer Carroll MacNeill and Fianna Fáil Senator Niall Blaney have called for a dedicated programme of work over the next year with a view to producing a “major publication” in time for the 25th anniversary.

They say the purpose of the proposal “is not only to look back but learn for the future” and they argue there is a “once-in-a-lifetime moment” to pursue the project with the protagonists who may be able to speak more openly on the political and diplomatic work involved given the time that has elapsed since the agreement was struck.

Ms Carroll MacNeill said: “We learned so much more from the publication of state papers over Christmas about the real difficulties in reaching the Good Friday Agreement.

“As we prepare for the next 25 years of its implementation, we want to hear directly from those who came together before to find common political agreement from a very divided past.”

Mr Blaney said the proposals could offer insights into how to gain trust and build respect while “recognising we have different political perspectives. We have more to lose in the future if this vital piece of work is not done now.”