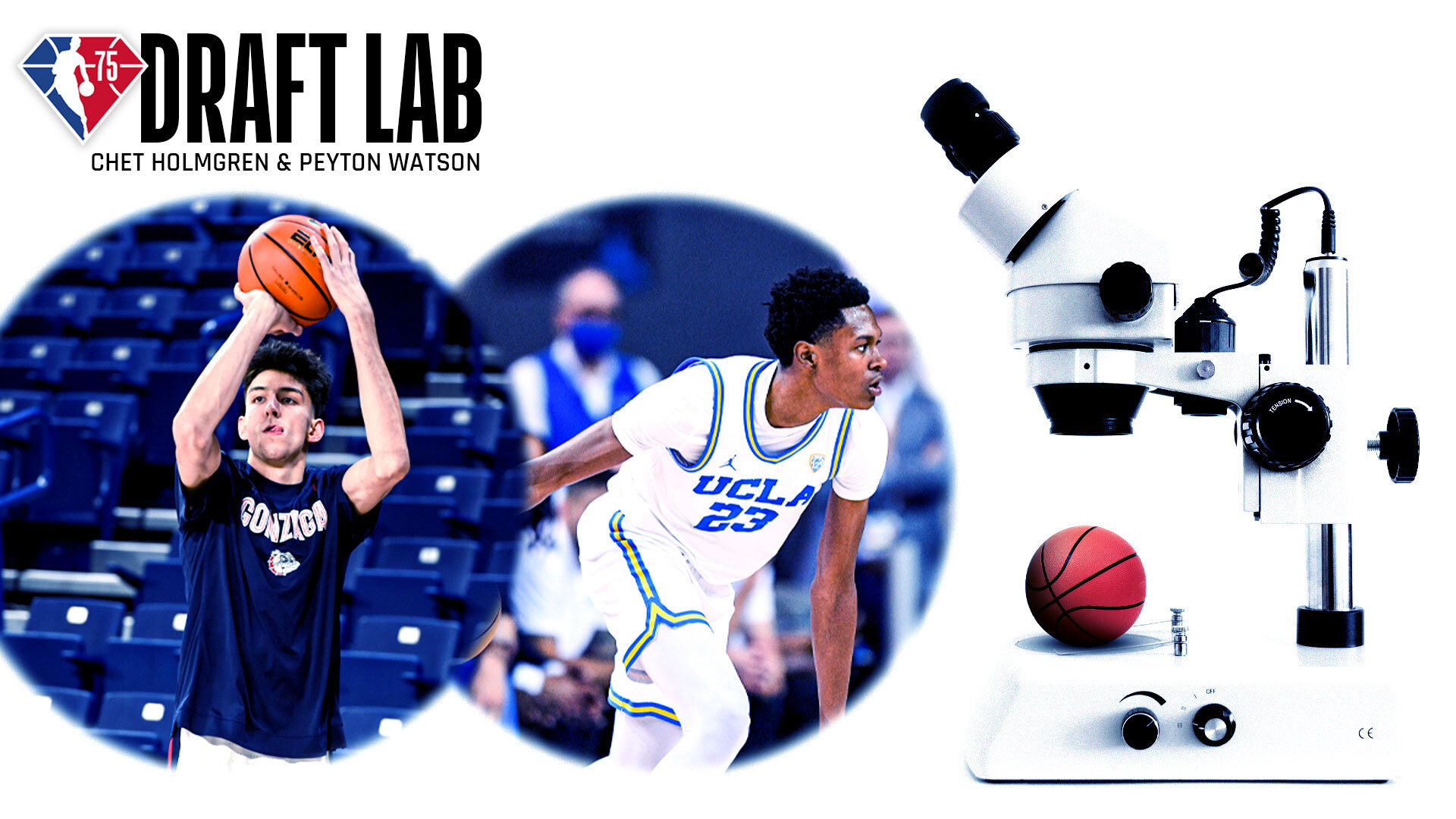 The SN Draft Lab puts the top college, G-League and international players under the microscope as we build towards the 2022 NBA draft. NBA scouts face the tall task of evaluating talent not only based on what players can do now but how they project in the NBA game moving forward. Throughout the 2021-22 season, Sporting News will break down the biggest prospects, projects and matchups to bring you the latest intel on names rising and falling on draft boards.

College basketball fans have plenty to be excited about when No. 1 Gonzaga takes on No. 2 UCLA on Tuesday, Nov. 23 at 10 p.m. ET.

The two best teams in the country are set to go head-to-head at T-Mobile Arena in Las Vegas, marking just the 43rd matchup between the Nos. 1 and 2-ranked teams in the AP college basketball poll, which dates back to 1949.

We’re only seven months removed from the last meeting between these two teams, which delivered an instant classic in the 2021 Final Four when Jalen Suggs buried a buzzer-beating halfcourt shot in overtime to keep Gonzaga’s undefeated season alive and advance to the National Championship game.

Since then, Gonzaga and UCLA have each returned the majority of their rotations from last year’s March Madness run and added a few big-time prospects, growing the significance of this must-see contest.

MORE: Patience the key for Peyton Watson on loaded UCLA

If you’re more of an NBA fan than a college basketball junkie, there’s something for you in this game, too.

Keep a close eye on Gonzaga freshman Chet Holmgren and UCLA freshman Peyton Watson, two potential lottery picks in the 2022 NBA Draft. If you aren’t already familiar with them, get to know two of the top prospects below.

The rundown: According to ESPN, Holmgren was the No. 1-ranked prospect for the Class of 2020. When he committed to Gonzaga, he became the first-ever No. 1 prospect in program history. With stars like Suggs and Corey Kispert moving on to the NBA following last year’s successful season, Holmgren has immediately slotted into the starting lineup, emerging as one of Gonzaga’s go-to guys on offense while anchoring their defense.

Profile: Holmgren is a 7-footer who handles the ball like a guard and protects the rim like a center. He’s uncharacteristically coordinated for his size and his mobility makes him a true threat inside and out on both sides of the ball. On offense, he can create his own shot off the dribble and has a shiftiness to him that causes mismatches against bigger defenders. Because of his ridiculous 7-foot-6 wingspan, it only takes him a dribble or two to get all the way to the rim.

He shoots it comfortably from 3-point and midrange as a floor-spacer, but he can also score in the paint with solid footwork and skilled touch, or simply just catch lobs around the rim.

On defense, he’s as elite of a shot-blocker as you’ll find in a college prospect.

He’s an interior defensive anchor but is also more than capable of stepping out to the perimeter on switches and holding his own against quicker guards.

Holmgren’s slender frame of 190 pounds is obviously a concern, but he competes with an attitude and doesn’t shy away from physical play – at least not against kids his own age. That will be one of the toughest adjustments when playing against grown men in the NBA, but at his height, his skill set is far too advanced to let his frame hold him back as a prospect. He still needs to improve his arsenal of post moves, decision-making and shot selection, and could develop as a passer, but Holmgren has all the makings of a future star.

As a result, the highly-touted freshman hasn’t seen much consistent playing time behind a group of upperclassmen so far. He’s only averaging 3.3 points in 14.3 minutes per game to this point and is being used more as a defensive specialist than a scorer, but there’s plenty of time for the 18-year-old to get comfortable on the court and crack a more solidified role in the rotation.

Profile: Watson is a long and athletic wing whose game projects nicely at the NBA level. He’s a fluid scorer who can create for himself at all three levels of the floor and although his jump shot consistency isn’t quite there yet, his mechanics are smooth.

With a reserved offensive role at UCLA, he’ll thrive as a cutter and slasher, using his quickness and leaping ability to score at the rim.

He showed flashes of being a capable playmaker in high school and if that skill develops, it will be a huge asset in becoming more than a 3-and-D player at the next level. Although he wasn’t necessarily known as a defender prior to college, his efforts on that side of the ball will earn him more playing time under head coach Mick Cronin. With all the tools to be a versatile, wiry defender, don’t be surprised to see Watson make major strides during his freshman season.

Watson will have to learn how to make an impact without having a featured role – something that will likely be an adjustment for a five-star recruit – but he has plenty of potential to be one of the best NBA players in his class.