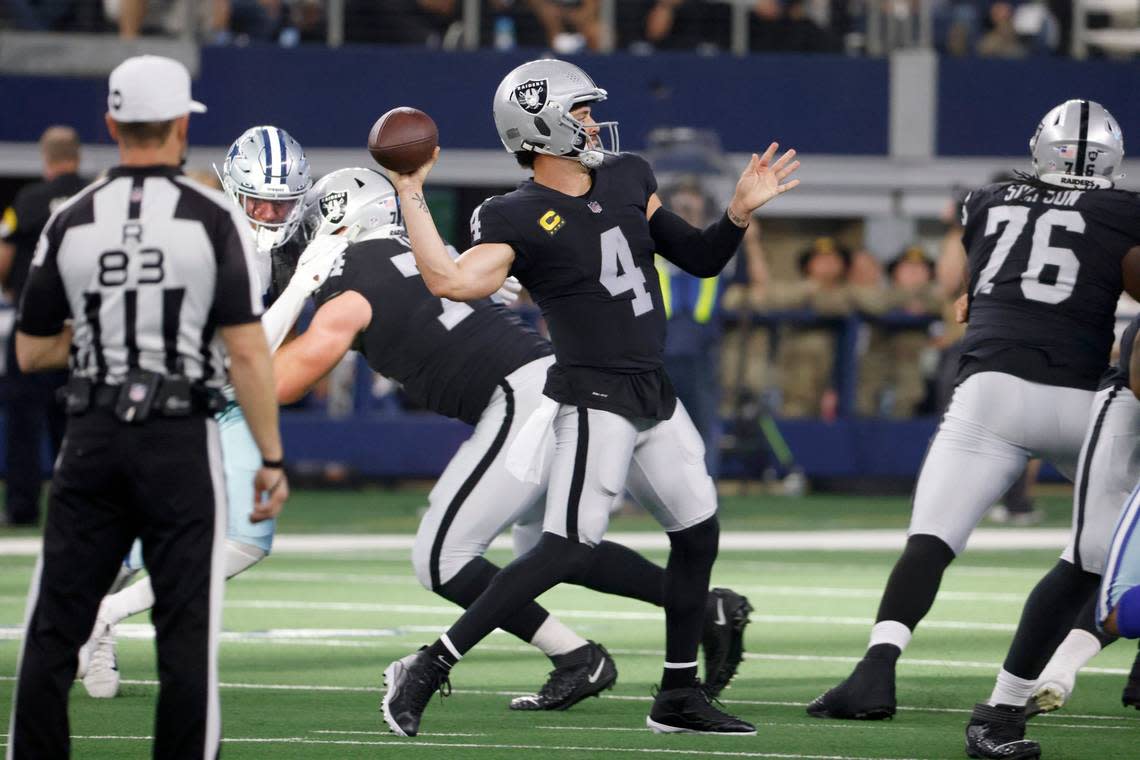 The advice was simple: “be aggressive.”

Carr was aggressive in the Raiders’ 36-33 victory over the the Cowboys behind Daniel Carlson’s 29-yard game-winning field goal in overtime.

“Gruden used to tell me ‘don’t take your arm out of the game’,” Carr said. “ ’When we call these things let’s rip them.’ We saw some things on film that hopefully we get some looks and get one-on-ones down the field. We were able to find some of those on an explosive day. (Cowboys) don’t give many of those up. We executed at such a high level.”

Carr finished the game completing 24 of 39 for 373 yards and a touchdown for a quarterback rating 101.8. The Raiders are now 5-0 when Carr throws for more than 300 yards.

He also became the first quarterback in Raiders history to pass for 30,000 yards.

Las Vegas improved to 6-5 after losing three straight in what was a must-win game to keep its playoff hopes alive in a close AFC race.

Not even Carr could exhale in the game in which the Raiders led by as many as 11 points in the third quarter after a Marcus Mariota 1-yard run.

But the Cowboys kept creeping back before tying the game after a touchdown and a two-point conversion to send the game into overtime.

The Raiders’ defense did their part in forcing the Cowboys to punt in overtime.

Las Vegas took over from there and took advantage of a pass inference call on the Cowboys to put the Raiders at Dallas’ 24-yard line. Three plays later that included three penalties, Carlson hit the field goal to give the Raiders the win.

“I can’t exhale in the game especially with this one today of how close it was,” Carr said. “I can’t exhale. Win or lose, whether it’s good or bad, I have to stay in the moment.”

Big moment in the game

DeSean Jackson picked up his first touchdown as a Raider when he caught a 56-yard pass from Carr for a 6-0 lead in the first quarter.

Jackson told Rich Bisaccia after the game that he was happy to contribute.

“It is fun to throw him the ball,” Carr said. “We hit that play and it’s exciting. It’s exciting for him obviously how his first catch in his Raider debut went (fumble). He came up big for us on some crucial down and distances.”

Jackson signed with the Raiders two weeks ago.