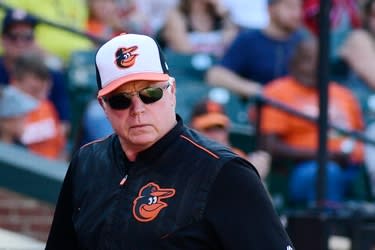 Adam Jones, who played for Showalter while with the Baltimore Orioles, made it clear that he wasn’t saying Showalter absolutely should get the job, but he gave him a ringing endorsement.

“I think this would be great,” Jones said on Twitter in response to an article in The New York Post that touted Showalter’s candidacy. “I see a lot of the comments. Folks are literally miserable.

“Also folks don’t have any idea of the real impact he can make on a ball club. And I’m not just talking players. The Franchise. He made everyone better and accountable! But someone who won’t read will have the most to say. I hope they get him!!”

Showalter had interest in the Mets’ manager job during their last search — before the team ultimately hired Carlos Beltran and then Luis Rojas (after Beltran was let go for his role in the Houston Astros’ sign-stealing scandal).

The 65-year-old Showalter has had four stops during a managerial career that began in 1992 with the Yankees.

Mets GM Billy Eppler said on Wednesday that the Mets were narrowing down their list of managerial candidates and that interviews would begin very soon.

Among the names who have been connected to the Mets so far — largely due to a history with Eppler — are former Los Angeles Angeles manager Brad Ausmus, Houston Astros bench coach Joe Espada, and former player and current Angels special assistant Eric Chavez.