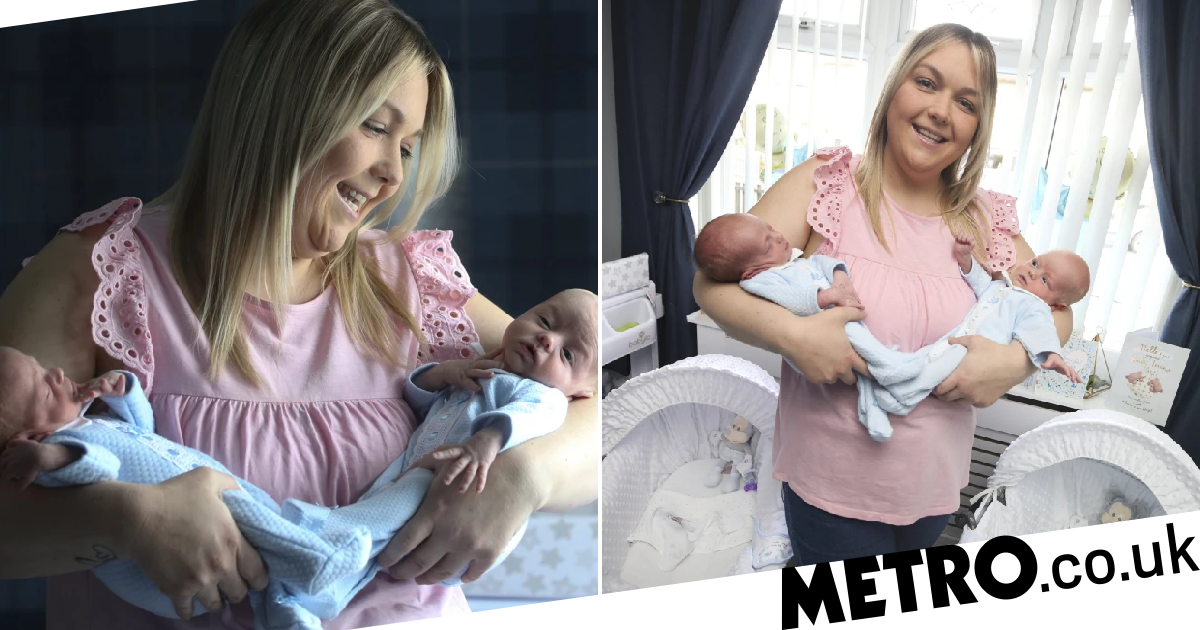 In late April, Amy McNaughton went into labour at 34 weeks along with her twin boys, Jace and Jude.

The 30-year-old was rushed to Wishaw General Hospital, in North Lanarkshire, the place she gave beginning to Jude in simply two pushes.

However, Amy suffered a wire prolapse – which put child Jace in peril – and was informed she urgently wanted an emergency c-section to get him out safely.

Valerie jumped on prime of Amy and held the infant and rope inside along with her hand, till they reached the working room.

Mum-of-three Amy says: ‘It was terrifying. I felt prefer it was one thing from a film being rushed to theatre with the midwife holding every little thing within me along with her hand.

‘I was scared for Jace as I didn’t suppose he would have made it with having the wire prolapse.’

After an emergency c-section Jace was born an hour later and the twins had been then despatched to the neonatal intensive care unit in incubators – to assist them preserve their physique temperatures.

Shortly after, they moved Jude and Jace to the particular care child unit the place they spent 11 days.

The infants have since been discharged and are actually having fun with household life in North Lanarkshire – alongside their four-year-old sister, Callie, and pop Graeme Pow.

But Amy believes it was Valerie’s actions that saved Jace’s life.

And it was much more of a miracle contemplating she had solely come into work by likelihood that day – as she took on an additional shift.

Now, Amy is hoping to be reunited with the midwife, to correctly thank her.

Amy provides: ‘The midwife, who in my eyes saved Jace’s life, was referred to as Valerie Ferry.

‘I’d love to seek out her to thank her.

‘She isn’t based mostly in Wishaw and solely took an additional shift that day.

‘I’m so grateful for her fast appearing to carry Jace in, because it might have been a very totally different final result.’


MORE : How to make weaning your child a breeze


MORE : I’ve been left with PTSD after working in vital care in the course of the pandemic