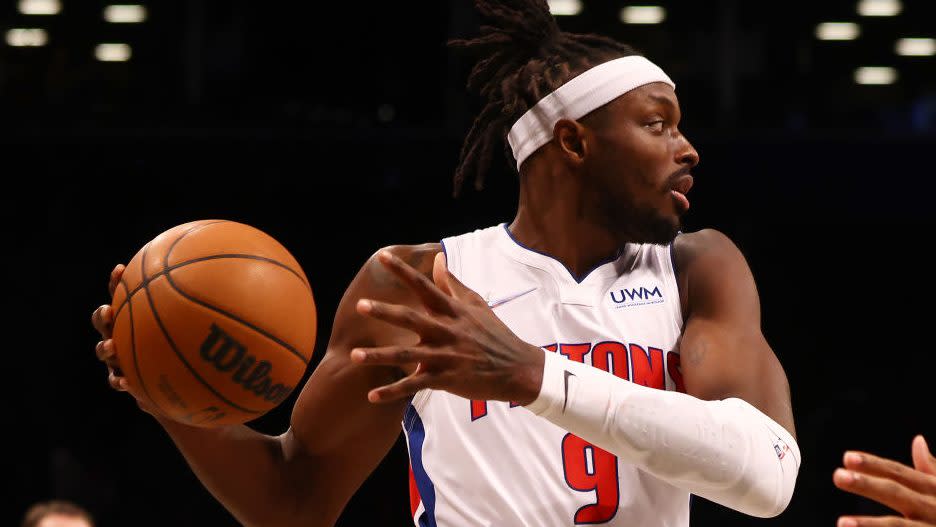 Who the 76ers want to land in a Ben Simmons trade is James Harden.

Of course they do. I want to be writing this story while sitting on a beach in Fiji. Wanting something does not make it real, and Harden has not sounded like a guy who wants to leave Brooklyn.

That Harden is the dream and one of the 30 or so players 76ers GM Daryl Morey would trade Simmons for was laid out by Keith Pompey of the Philadelphia Inquirer, but he also reported talks about a more realistic scenario: A trade with Detroit that brings Jerami Grant back to Philly.

The team has engaged in ongoing discussions with the Detroit Pistons to acquire Grant, another forward, a young player, and a draft pick in exchange for Simmons, league sources said. One source said power forward/center Kelly Olynyk and second-year swingman Saddiq Bey were mentioned as players who could be included in a possible deal. However, a source said the Pistons are unlikely to include Bey, a Villanova product, or Olynyk.

A person close to the Sixers said the team would want a more high-profile player than Grant in exchange for Simmons. The source added that the team hasn’t spoken to the Pistons lately.

But multiple sources said the Sixers indeed have, and that the discussions were centered around Grant.

This sounds closer to the reality of the Simmons trade market and the reality of his trade value as he continues to be away from the team saying he is not mentally ready to play. Grant is averaging 18 points a game this season, down from 22.3 last season, and he is one of many players seeing a dip in his shooting numbers now that fans are back in the building (30.9% from 3 this season, when he had been at 35% or higher the past several seasons). Grant has never been an All-Star but has developed into a quality four who can stretch the floor and he brings impressive athleticism to the court. That’s why Philadelphia drafted him in the second round out of Syracuse back in 2014.

Simmons would bring a talent upgrade to rebuilding Detroit. However, how he would mesh with rookie and young face of the franchise Cade Cunningham is up for debate. Bringing in Simmons would mean the ball is in Cunningman’s hands less often.

Pompey then says some in the 76ers front office want to hold on to Simmons and wait for a sign-and-trade for Harden, who is a favorite of Morey’s from when both of them were in Houston together.

The dream of Harden wanting out of Brooklyn is just that. Yes, the Nets offered a four-year, $161 million max contract extension to Harden and he chose not to sign it, but there are 62 million reasons for that. After this season ends, Harden can opt into his $47.4 million contract for the 2022-23 season, then sign a four-year extension off that worth $223 million. Plus, Harden has said, “I don’t plan on leaving this organization and the situation that we have” (that situation being playing on a contender next to Kevin Durant, with maybe someday Kyrie Irving joining them).

The talks with Detroit, if they are still happening on some level, are not near completion. The reality remains it is highly unlikely any trade talks for Simmons get serious before Dec. 15 — when most players who signed this summer can be traded — and that the Simmons saga will drag into 2022, and maybe to the Feb. 10 trade deadline.

And possibly beyond that.

Here’s more on the 76ers