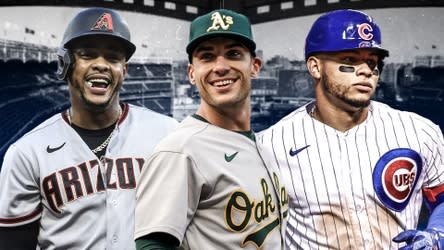 Yankees GM Brian Cashman says he has some “latitude” to go over the luxury tax this offseason, making an aggressive push at some of the top free agents likely.

But what about the trade market?

Cashman likely won’t leave any rock unturned and that includes some players who could be dealt before spring training.

The D-Backs need a massive rebuild after tying for the league’s worst record at 52-110 with the Baltimore Orioles last season. And that’s why contenders are likely to ask about Marte this offseason.

The Yankees would have interest in the 27-year-old because Cashman stated Aaron Hicks’ status as the team’s starting center fielder is up in the air. They’ll be in the market for someone, and Marte has the ability to play there, though some see him as a better fit at second base or shortstop.

But the biggest appeal is his switch-hitting bat that has been able to produce well in the middle of Arizona’s lineup.

His versatility in the field and at the plate makes him extremely attractive for teams that believe they can give the Diamondbacks a deal fit for an All-Star.

Speaking of All-Stars, Yankee fans are already drooling over what it would look like to see Olson’s towering homers smack off the facade and land in the top decks in right field. SNY’s Andy Martino has reported that Olson is there for the taking, and that’s due to the A’s already showing a shift in their thinking with Bob Melvin heading to San Diego to manage the Padres. That was the first step in what’s considered to be a rebuild out in Oakland.

Again, this will certainly take a big trade package if Olson is the first baseman the Yanks are looking for. Olson still has two years of control, including this season, before he’s a free agent in 2024. And he’s one of the league’s best at the position with tremendous power.

The Yanks have also been connected with Anthony Rizzo after he showed chemistry and quick production when he came over to New York from Chicago. But, if the price is right – again, it’ll take a lot to get a 5.8 WAR player from Oakland — Olson is the better option both in the short- and long-term.

The catcher situation in the Bronx is interesting to say the least, as another year passes where Gary Sanchez hasn’t solidified himself as the team’s franchise player at the position. Kyle Higashioka, once again, started in the postseason for Gerrit Cole and Sanchez sputtered at the plate more often than not.

While the free agent market is thin at catcher, the Cubs could certainly try to shop Contreras.

The 29-year-old is solid defensively. His frame rates are good on both corners, hovering between 64-67 percent strike calls. And he can hit well, too, with a .349 career OBP and 21 dingers coming last season over 128 games.

It will definitely depend on how steep the price is for the Cubs considering the Yanks do like their catching combo. But with Contreras only having one year of control before free agency in 2023, could the Yanks lock him up now to be their future leader behind the dish?

There’s been no indication they still favor Sanchez, as Cashman has noted he hasn’t solidified his role despite the Yankees’ continued faith in him.

If he wasn’t hurt so often, Buxton would likely be staying put. He’s one of the best players in the game — when he’s on the field.

Buxton is also an extremely talented center fielder with speed and a cannon for an arm.

The asking price from the Twins may not be as high as one might expect due to the injury history. And for the Yankees, if they want to take that risk, they could see what it is. The only reason he goes on this list is because of the talent level he has at just 27 years old.

The injury history, though, must be considered, especially if the Yanks are looking for someone to take over Hicks’ starting role.

Buxton has just one year of arbitration left before he’s a free agent after the 2022 season.

MLB Network’s Jon Morosi reported earlier this month that the Yankees were among potential trade suitors for Reynolds. He was someone who was rumored to be on the move at this past trade deadline, but the Pirates’ asking price was very high – as it should’ve been.

They could still view him as someone they need to rebuild with, especially as a switch-hitter who slashed .302/.390/.522 with 24 homers and 90 RBI. He’s fast in center as well with a plus arm.

But that asking price likely won’t change anytime soon, which is why he’s lower on this list. He’s got four years of team control left before free agency in 2026, and he’s coming off his best year in the bigs (2021 was only Year 3 for him).

Still, his youth and talent make him intriguing enough for the Yanks to be interested.